Cryptids in the Bible Series: Bigfoot and the Bible

Faith: (1) Belief and trust in and loyalty to God (2): Firm belief in something for which there is no proof (3): Something that is believed with extremely strong conviction; especially a system of religious beliefs.

Faith can be the greatest thing in the world. Faith gives hope to those in terrible situations. Faith provides us with the strength to get out of bed each and every morning, even when things are not going well for us. Faith strengthens our resolve in difficult circumstances and comforts us in the knowledge that no matter how badly someone has screwed up they are not beyond redemption. Faith can be powerful and wonderful.

Faith: (1) Allegiance to duty, a person, or an idea (2): Believing something or someone without question.

Faith can also be twisted into something negative and frightening. Blind allegiance to a person or an idea can make one close-minded, obtuse, and blind to facts that might point to an answer or fact that the individual is uncomfortable with for some reason. Often, blind faith leads to denial even in the face of unrelenting fact. Sometimes the reason is as simple as someone not wanting to admit they have been wrong, maybe for decades, about something. Sometimes the individual has some sort of stake in the status quo and not only wants to deny newly discovered facts but to suppress them. It is my opinion that this is part of the reason the possibility of the sasquatch actually existing is ridiculed, scoffed at, and just plain ignored by so many. For some reason, many find the possibility that we might share our planet with another bipedal hominid to be a direct assault on their faith in God. If such a creature existed then it might render their faith meaningless.

Some have not merely dismissed the possibility of the sasquatch. Instead, they have taken a different tact and looked to scripture in an effort to unearth some possible mention of the creature in the Bible. If beings matching the description of bigfoot are mentioned in the Bible, that would mean the creatures were just another animal created by God. If that were true, then the implications of evolution, Darwinism, and missing links would need not be considered at all. Those who have sought bigfoot in the Bible have presented some interesting theories based on scripture. The more commonly discussed are presented below. 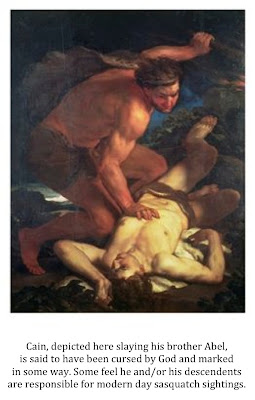 One of the more popular theories is that sasquatches are the descendants of Cain. The basis for this theory emerges from the fact that Cain was cursed by God to be a restless wanderer on the earth as punishment for slaying his brother, Abel. Cain was marked by God so that any who saw him would not kill him and end his torment (Genesis 3: 10-16). One interpretation of all this is that Cain could not die and wanders all over the earth to this day. The "mark," I've heard others say, is that he was covered in hair and naked. This, obviously, matches the description of the sasquatch. If you continue with the Genesis account, however, it says Cain went on to live in the land of Nod, east of Eden, and fathered Enoch, for whom he built a great city (Genesis 3: 17). The account goes on to name multiple descendants. I've seen nothing in the description of the descendants to lead me to believe that they were hair-covered beings. Obviously, sasquatches do not build cities. Neither do I believe that every sasquatch witness has actually had a Cain sighting. The fact that Cain went on to be a builder of cities, was the father of many, apparently, normal (non hair-covered) descendents, and that the theory is dependent on Cain being the one and only sasquatch on the entire earth makes this one a stretch to say the least, in my opinion. 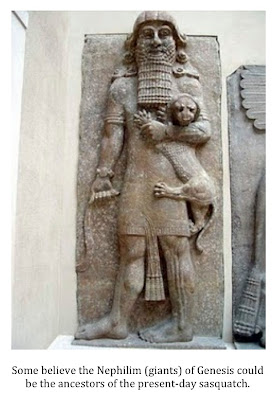 Another popular biblical theory is that the sasquatch species is a remnant population of the legendary Nephilim (giants) of the Old Testament. Genesis 6: 4 reads:

"The Nephilim were on the earth in those days - and also afterward- when the sons of God went to the daughters of men and had children with them. They were the heroes of old, men of reknown."

Many have interpreted the verse to mean that the Nephilim were not human, at least not what we would consider human, and they were breeding with the "daughters of men." Whatever the case, the Bible seems to be clearly differentiating between the Nephilim, whatever they were, and the daughters of men (humans). The fact that the two different races could mate and have viable offspring certainly supports the idea that the Nephilim were primates of some sort. It is further posited by many that these offspring would have been very large and, to some degree, giants in their own right. Could the sasquatch be a descendant of these offspring? Some think so. Again, there is precious little to go on when it comes to what the Nephilim looked like. Obviously, they were very large and must have been at least “man-like” in order to breed with human women. While nothing close to the classic description of a sasquatch is attributed to the Nephilim, with the exception of their abnormal size, there does seem to have been something very different about them that made the “fraternization” between them and human females displeasing to God. Certainly, the thought of this kind of mixing between humans and other primates is an anathema to us now. Was this always the case? There has long been an underlying suspicion that sasquatches are more than open to mating with human females. Many of the Native American tribes relate tales to this day of sasquatches who, in the past, would abduct females that wandered too far away from the protection of the tribe. Albert Ostman himself speculated that the reason he was snatched from his remote campsite in British Columbia back in 1924 was that the big male who toted him off considered him a possible mate for the adolescent female within his family group. Such theories are, of course, mere speculation but it is interesting that the idea and/or fear of such couplings hangs on to this very day. 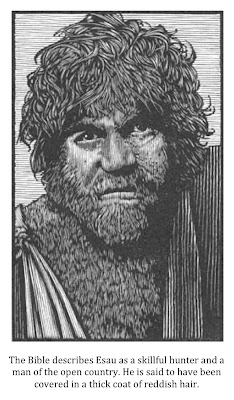 Another biblical character that is often mentioned when it comes to this topic is Esau. Certainly, Esau’s physical attributes are described in far more detail than whatever mark God afflicted Cain with or what exactly the Nephilim might have looked like. Many lean toward the idea that sasquatches are the descendants of Esau, son of Isaac and Rebekah. Genesis 25: 24-25 tells of the birth of Esau and his brother Jacob:

"When the time came for her to give birth, there were twin boys in her womb. The first to come out was red, and his whole body was like a hairy garment; so they named him Esau."

Esau is thought to have meant hairy. Esau was also called Edom, which meant red.

"The boys grew up and Esau became a skillful hunter, a man of the open country, while Jacob was a quiet man, staying among the tents."

The well-known story continues with Jacob tricking Esau out of his birthright and stealing Isaac's blessing for his first-born son by pretending to be Esau. Jacob tricks his father by covering himself with the hairy hide of a goat so that when his father laid hands on him he would believe it was Esau he was touching. The fact that this deception worked gives testament to how hairy Esau must have been. The reddish hue of Esau’s hair-covered body is reminiscent of the brownish-red coloration often attributed to sasquatches today. The fact that Esau is described as a skillful hunter that preferred living in the wild and the taste of wild game to camp life and less exotic fare lends more credence to this theory.

There are problems with the idea that the sasquatches seen today are the descendants of Esau, however. As is documented in the Bible, Esau used language, rode horses, wore clothing, and commanded men. To think that his descendants would have somehow devolved into beings that, by all accounts, are much more primitive is unlikely in my mind.

There are other, less popular, biblical theories floating around out there that involve beings that some believe might have been sasquatches or, at least, their ancestors. It is said that the Israelites, after making their exodus from Egypt, were pestered by rock-throwing primitives resembling apes during their desert wanderings. Rock throwing continues to be a big part of described sasquatch behavior today. Another account, now excluded from most biblical texts, is the story of a Nephilim (giant) named Og who bartered his way onto the ark of Noah in order to escape the flood that destroyed all of humanity by promising to become a servant of the family. Needless to say, this giant reneged on his promise once the waters receded from the earth and he was able to set his large feet on dry land. How he might have propagated, being the sole survivor of his race, never seems to be discussed by those who favor the theory.

I don't really put much stock in these various theories. I do think the sasquatch is more than just another animal. They are more intelligent, stealthier, more cunning, and more wary than any other animal of which I'm aware. My goal, and that of the TBRC, is to figure out what they are and where they came from (lineage). Hopefully, one day soon, we will do just that. Until then, speculation on whether or not they are the descendents of people mentioned in the Bible, surviving Gigantopithecus blackii, or a remnant population of Neanderthals will go on unabated.

I don’t really understand why people of faith are often threatened by the possible existence of this species. In my mind, the sasquatch is just another one of God's wonders. Whether the Bible does or does not mention them doesn’t matter to me a bit. Many, actually most, creatures are omitted from scripture. The Bible really isn’t the story of the animal kingdom, after all, so this should hardly be surprising. Neither does the idea that the sasquatch is closely related to we humans disturb me. The DNA of a chimpanzee is 96% identical to that of humans. Maybe a sasquatch is genetically 98-99% identical to we humans. No big deal to me. These thoughts don’t shake my faith at all.

I believe in God. I believe the sasquatch is a real living creature. I don’t think the two beliefs have to be mutually exclusive.
Posted by Mike at 5:00 PM

Email ThisBlogThis!Share to TwitterShare to FacebookShare to Pinterest
Labels: Best of TCH, Bigfoot, Cryptids in the Bible Series, Theories