According to an article in the Temple Daily Telegram, two horses had to be euthanized after being attacked by a mountain lion this past Wednesday in a rural area of north Temple.

The property, owned by Chris Johnsen, 56, is located off Berger Road just north of the H.K. Dodgen Loop. Johnson said she knew something was wrong when the eight horses she keeps on the property failed to show up at feeding time on Tuesday night. Worried, Johnsen asked her friends, Ted and Nancy Fisher, to look for the horses early Wednesday morning. The Fishers were interested parties, as they own two of the horses being kept on the property. The Fishers found the horses; unfortunately, two mares, including one they owned, were badly mutilated. The mares were alive but suffering from multiple serious wounds.

“They had large claw marks on them,” Johnsen said.

Dr. Katie Frosch of the Belton Veterinarian Clinic was called to the scene and decided the horses were mortally wounded and should be put out of their misery.

“We had to put them down just to be humane,” she said. “The horses were unable to walk due to severe lacerations on their legs.” 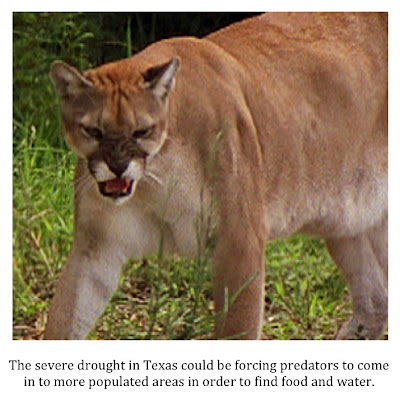 Dr. Frosch has worked in the area for two years and said this was the first such attack she’s seen. She did agree that a mountain lion was the culprit due to the specific types of injuries the horses suffered.

Game Warden Billy Champlin said that cougars are indigenous to the state but typically target animals smaller than the mares. He speculated that the cat in question here likely started out targeting the mares’ foals. He is quoted as saying that in his eleven years on the job he has never seen a mountain lion alive in the wild but that three to four sightings a year from the area are typical.

Chris Johnsen, on the other hand, has seen cougars on her property before but not recently. She said that the remaining horses would be penned up for awhile in the hopes that the big cat would move out of the area.

Texas is currently suffering through the most severe drought in the last seventy-five years. Central Texas has been particularly hard hit. It could be that this cougar is having a hard time finding its typical prey due to the tough conditions or that it came onto the property seeking water and could not resist the temptation the young foals represented. Several other unusual livestock kills have been reported in Bell County over the last few months. I currently have a couple of game cameras out in western Bell County now in the hopes of identifying the mystery predator in that area.

It seems northern Bell County now has a large predator of its own.
Posted by Mike at 5:13 PM