A Tale of Two "Alligators"

It has been a busy month or so for all things “alligator” in the Lone Star State. Late last month, word came of a monstrous gator killed on the Trinity River in Leon County. Now we have a story involving a slightly out of place alligator captured in Waco. 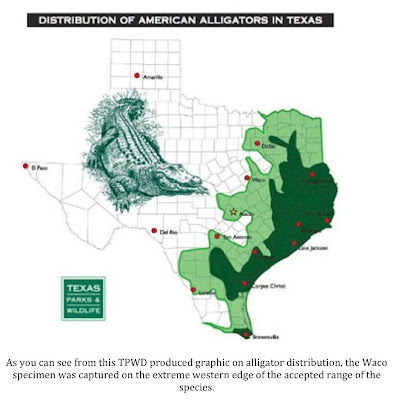 According to Waco’s CBS affiliate KWTX, an alligator (Alligator mississippiensis) measuring between three and four feet long was captured in a residential area not too far from Lake Waco. The alligator was caught near the intersection of Edna Ave. and MacArthur Dr. This intersection is just northeast of Lake Waco near a small inlet called Lake Robinhood by local residents.

The alligator died soon after being captured. A necropsy, performed by officials from the Cameron Park Zoo, revealed severe dehydration and/or parasites as the likely cause of death. Wildlife officials stated that they believed the alligator was likely indigenous to Lake Waco and not an escaped pet (can you believe it?). They based this opinion on the stomach contents of the animal, which consisted mainly of insects. The wildlife officials did say it is possible someone caught the alligator with the intention of keeping it as a pet. They theorized that, if true, this person soon came to the realization that this alligator was just too big and aggressive to be safely kept and released it. A short video on this story can be viewed at the KWTX website. 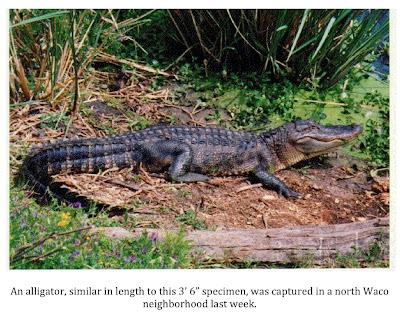 In other “alligator” news, Cleveland, Texas angler Joseph Williams has set a new catch-and-release record for alligator gar (Atractosteus spatula). Williams, who says he fishes about 30 weekends a year below the Lake Livingston Dam on the Trinity River, hooked and landed a 7’ 4” long bruiser on July 4th that he will submit for recognition as the new state catch-and-release record. If approved, the Williams gar will surpass an 6’ 8” long gar caught by Leo Flores in Choke Canyon Reservoir back in March of 2011. 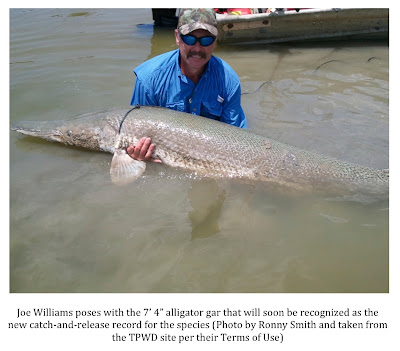 Williams is a gar fanatic that has done battle with these river monsters before. Back in April he pulled a 200 lb. gar from the Trinity that did not survive the battle. That fish, according to an article on the Texas Parks & Wildlife site, is the new rod and reel record for the Trinity River.

To qualify for a catch-and-release record, a fish must be landed, photographed, measured, and released alive. Apparently, and it makes sense, I suppose, as few would carry a scale capable of measuring a monster gar in the 200 lb. range, weight does not figure into catch-and release records for this species. It seems the record is based solely on length.

So, if you're looking for anything "alligator" related, Texas seems to be the place to be at this point in time.
Posted by Mike at 7:17 PM