Sasquatch FAQ: Why Has A Hunter Never Taken One?

I received an email last week that brought this question up again. It is one of the 3-4 most commonly asked questions whenever I talk to people about the reality of the sasquatch. Below is the email, with the sender’s name removed in order to protect his/her privacy:

"I believe in bigfoot. There is something that bothers me though. There is an incident recounted on your (TBRC) site where a hunter saw a bigfoot picking up apples. He had him in his scope at 150 yards for two minutes. Why didn't this result in a kill ? Why do we not have any kills to support the other evidence?"

One thing Ive heard often is that they just didn't know what they were seeing. As I'm sure most of you out there realize, hunters are not indiscriminate killers who go around shooting up the woods like crazy people (despite what many in our society think). Rather, they are trained to never fire unless they can positively identify what they are targeting. If a hunter sees a bipedal upright figure walking, especially during low-light conditions, it is only natural that they assume they are looking at another person. Many have asked, “Hunters are required to wear a certain amount of orange. If there is no orange on the figure why not pull the trigger?” It is true that hunters are required to wear orange in most locales; however, if you think every one of them actually does, you would be sorely mistaken. Firing at an upright figure just because it doesn’t appear to be wearing orange is a recipe for tragedy and most hunters just will not do it. They will hesitate in an effort to positively identify what they are seeing. By the time the hunter realizes exactly what he is seeing, often, the opportunity to take a shot is gone. 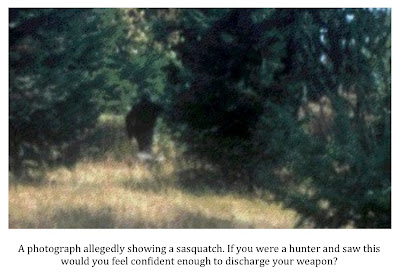 Another thing I've heard from several hunters is that they were not confident they had enough fire-power to take down the animal. The "I didn't think I had enough gun," statement is not an unusual refrain. They feared that they would only wound the creature, which would create a dangerous scenario for them. An animal, any animal, is never more dangerous than when it is hurt. They decided the weapon they were carrying might not be enough to finish the animal off and passed on the shot. I’m not sure if this is actually true or not. I’ve always believed shot placement is far more important than the caliber used. Admittedly, I’ve never been in this position so that is easy for me to say. I think it is more of a psychological hurdle that hunters who’ve found themselves in this position have been unable to clear. The average white-tailed buck weighs between 130-300 lbs. Does are smaller with an average weight between 90-200 lbs. Deer in Texas, and the south in general, trend toward the lower end of those estimates (see Bergmann's Rule). That being the case, a hunter who unexpectedly finds himself staring at a sasquatch many times more massive than the buck he hoped to see might, quite understandably, feel he did not have enough gun to take the animal down.

Other hunters have stated that they feared there might be more than one of the creatures in the vicinity. They were afraid that if there was a mate in the brush somewhere nearby it might not take kindly to the shooting of its partner. The hunters feared reprisal. They have said things along the lines of, "It was a pretty good walk back to the truck," and "I was going to have to come out of that tree stand at some point," as reasons why they passed on the shot. This may be the most valid of the reasons most commonly given by hunters who have not pulled the trigger. I’ve come to believe that these animals are often not alone. I’ve experienced some incidents recently that seem to confirm that (more on that soon). Indeed, more than one hunter who has told me he had a sasquatch in his sights soon spotted or heard a second creature after deciding against firing. 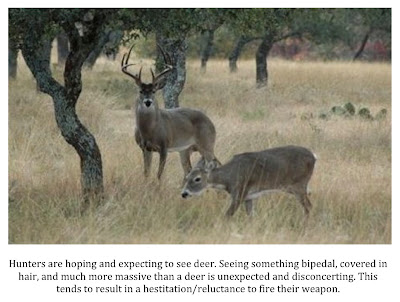 One other thing I've heard is that once sighted in the hunter found the sasquatch to be so human-looking that they just couldn't make themselves pull the trigger. When pressed on what it was specifically that made the sasquatch appear human, most have simply referred to the way the animal moved. They mention that it was standing up or walking, "like a man would." A few have claimed that they got a look at the face and felt it was not a typical animal. These hunters often struggle when asked to describe exactly what it was about the creature that made them feel that way. Again, I think that the shock of seeing something bipedal and walking like a person would be enough to convince almost anyone that this might not be an animal but a person of some sort. It is another one of those psychological hurdles. If it walks like a man, moves like a man, or stands up like a man it must be a man despite other characteristics that clearly make it different (covered in hair, extraordinary size, etc.). It is just the way we think.

While all of the above is true there are several incidents where hunters have claimed they did take a shot. Some of these stories are dubious at best, the story of a man going by the name of “Buggs” comes to mind, but some seem credible. Regardless, none have produced a body to this point. This is one of the very facts that those who dismiss the possibility of the sasquatch use in their arguments. I feel there are many solid counter-points to this argument but cannot completely satisfy the critics or, at times, myself as to why these scenarios have never, not even once, produced a body.

I'm not sure that you will find these explanations as to why a hunter has never taken a sasquatch to be completely satisfying. I'm not sure I do either but it is easy to second-guess these hunters when you haven't been in their shoes, I suppose. In any case, these are the things I've heard from hunters who claim to have been in this situation. It is what it is.