I checked the cameras I have out on some private land in Bell County this past weekend. The area has endured an unusual amount of predation over the last six months. Chickens and goats have been especially hard hit in the area. Witnesses have provided conflicting reports as to just what sort of animal the culprit, or culprits, might be. Ranchers in the area have reported seeing cougars (Puma concolor), coyotes (Canis latrans), and even wolves.

The property owners shared with me that they have seen some very large canids on the property in recent weeks. One story that was related to me was that of a very large coyote or wolf that circled one of the family members as he was out cutting some wood on the property. He reported that the animal was colored similarly to a coyote but was much bigger. The man said it was at least as big as his full-grown Labrador retriever. I haven’t seen his lab but do know that an adult male will typically weigh 75-110 lbs. The family member went on to describe the height of the animal that circled him as being up to his mid-thigh. This family member isn’t a huge guy but he is 5’10” or so. The point is that, if he is accurate in his size estimates, this animal is bigger than a normal coyote. The animal circled him multiple times while he was cutting wood making him very uncomfortable. He reported that the animal threw his head back at one point and howled loudly. 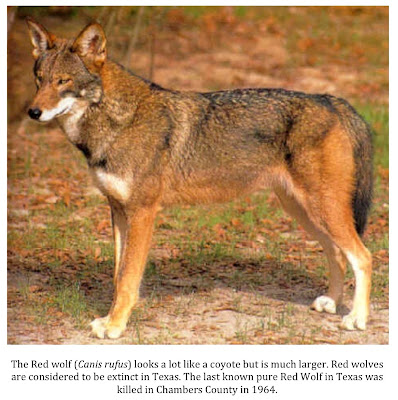 This is pretty unusual behavior for a coyote or a wolf. The skittish nature of these animals is legendary. However, as I’ve written here before, coyotes and wolves do seem to be living in closer proximity to people than ever before. As a result, they may be getting more comfortable around humans. There are other possible explanations for this animal’s bold behavior. It could be sick or injured. If so, it may be desperate for a meal of any kind. Desperation will certainly lead to atypical behavior. Another explanation could have to do with the terrible drought we are experiencing in Texas right now. We have gone months without any significant rainfall. Lake levels are plummeting, water rationing is starting to go into effect in a lot of locales, and wildlife is suffering. I read just last week about the increase in snakebites in Texas this summer. The number of bites is more than double what is typical in our area for the year. The reptile expert interviewed as part of this article posited that this was due in large part to the drought. Snakes, he said, are coming into residential areas where people are watering their yards in order to find a drink. Once there, the snakes are taking up residence under shrubs and in flower-beds which is causing them to come into contact with people more often than is usual. It is possible, whatever this animal is, the drought is causing our mystery canid to come into more populated areas to find water. The property would be among the first populated parcels that would be encountered by an animal coming in from the west looking for water.

I was encouraged that an unusual animal had continued to be seen over the last couple of weeks and was hopeful that I might have obtained a photograph. The cameras are in a remote portion of the property on a cow/game trail. Cattle roam all over the property but they are limited in their access to this area and appear to come through only sporadically. Come through a couple of times they did, however. As a result I got a quite a few cow photos. One shot in particular is pretty comical as it shows the rear-end of a rust colored cow quite close-up. My wife suggested that this could be the new logo for the blog. She was kidding…I think. All this would have been well and good except these girls brushed up against the cameras and/or the trees they were on which altered their cone of detection. The position of the cameras was altered only slightly but it was enough as they were no longer pointed straight up and down the trail. As a result, fewer photographs than anticipated were taken. 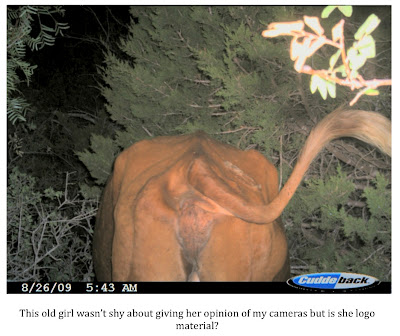 I have repositioned the cameras and am hopeful that they will eventually yield a photo of the predator that is, at least occasionally, roaming the property. My guess is that the animal in question is an unusually large coyote; however, hybridization did take place between coyotes and red wolves (Canis rufus). It is possible that this specimen is exhibiting more of the red wolf lineage than is typical. I will say it would be quite exciting to get a photo of a true red wolf as they are thought to have been extirpated from Texas.

I’ll check the cameras again in a month or so and provide another update at that time.
Posted by Mike at 3:12 PM