The Sea Monster of Port Isabel

Since time immemorial men have been fascinated and lured by the sea. Explorers, treasure-seekers, fishermen, adventurers, and pirates have all plied the waters of the sea hoping, in different ways, to make their mark. But there is more to the allure of the sea than the promise of wealth. There is a sense of mystery about it. You’ve probably heard it said that we know more about the surface of the moon than we do about the ocean floor. This would be an accurate statement. The bone-crushing depths and the sheer vastness of the world’s oceans have proven formidable obstacles to overcome in our efforts to explore the sea and have left us with a sense of awe and wonder.

I think it is safe to say there is also a healthy respect born out of, to some degree, fear. The power of the ocean in nearly unimaginable but there is more to it than that. There is also a great sense of the unknown, which can spawn trepidation. Fear of what might be swimming below us in the dark depths has given birth to many frightening stories. Tales from the earliest times of seafaring have hinted at beasts that are truly terrifying. Some, like the dreaded kraken, have turned out to be based on real creatures. Other reported sea monsters, however, do not seem to match up well with animals now known to modern science. The warm waters of the Gulf of Mexico have spawned their own tales of sea monsters. It is one such story that I will recount now. 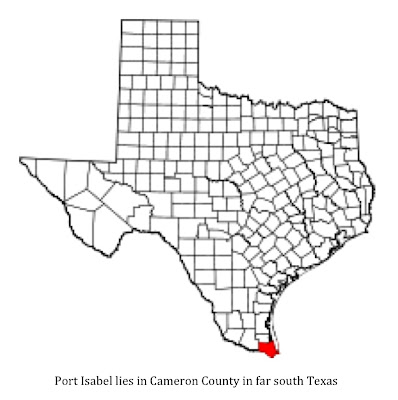 The year was 1938 and sport fishing had become a big draw in the south Texas town of Port Isabel. Wealthy sportsmen flocked to the Rio Grande Valley to go after trophy tarpon and various species of billfish. There was a yearly tournament called the Rio Grande Valley Fishing Rodeo, which was later renamed the Texas International Fishing Tournament, that provided an influx of tourists and their coveted dollars annually. On August 10th of that year things took a bit of a turn. The Brownsville Herald, in a short article on the back page, devoted several paragraphs to the sighting of a huge and unknown creature in the waters off Port Isabel. According to the article, several captains and their crews along with personnel aboard several other vessels had spotted a massive creature at least 40-feet in length swimming near the surface. While the article offered no further description of the creature, the term “sea monster” was used and the frenzy began.

Theories as to what the mystery beast could be varied greatly. Sally Crowe, a stenographer for the Rio Grande Valley Fishing Rodeo, put forth the reasonable theory that the beast might be a basking shark (Cetorhinus maximus). This shark is one of the largest fish on the planet and reaches lengths approaching 40-feet. When asked how she came up with the theory that the Port Isabel sea monster might be a basking shark, Ms. Crowe replied, “I just started at the front page of a dictionary and stopped at every picture of a fish – and there it was on page 180!”

Another reasonable theory put forth on August 12th in the Brownsville Daily Herald by a Mr. Alton Hutson was that the creature in question was nothing more than a whale shark (Rhincodon typus). The whale shark is generally acknowledged to be the largest of all fishes and specimens up to and exceeding 40-feet in length are not uncommon.

Other theories ranging from giant sea turtles to Port Isabel’s very own version of the Loch Ness monster were bandied about as well. It wasn’t long before speculation on the creature’s identity by the locals gave way to discussions on ways to catch it.

It seems at least one person grew weary of waiting around for someone to come up with a plan. Ms. Charlotte Sewell, a well-known sportswoman who had claimed the Valley fishing tournaments women’s division championship in 1936 and 1937 decided to take matters into her own capable hands. She famously proclaimed in the August 12th edition of the Brownsville Daily Herald, in an article entitled “Women May Seek Sea Monster,” that she was willing to join a search party to seek out the mystery creature. She added that if the men of Port Isabel were not up to the challenge, she would put together an all woman team of monster hunters. Nobody seemed to doubt that she meant every word she said.

Ms. Sewell’s comments seemed to achieve the desired effect as within days it was decided that an expedition to seek out the Port Isabel sea monster would become a reality. Scouting vessels were dispatched to patrol the waters in the area where the great beast had been seen. The plan was, once the creature’s general location had been determined, a ship outfitted with harpoons and 500-feet of rope attached to tightly plugged barrels (think the chase scene from the movie Jaws) would hurry to the scene in an effort to end the mystery once and for all. Even the U.S. Coast Guard got involved though, to be honest, it appears they wanted to keep an eye on the monster hunters more than they wanted to help capture the monster itself. The commander of the Coast Guard station on Padre Island, Capt. Pablo Valent, said, “We do not contemplate that the party will run into trouble but it is in line of our duty that we be ready to offer aid should it be needed. Our boats will be within reach from the time the fish is sighted until he is lost or returned to port.”

The flagship of the hunt turned out to be skippered by none other than the Vice-President of the Port Isabel Chamber of Commerce, a Mr. B.B. Burnell. Burnell’s vessel carried a who’s who of local luminaries including the mayor of Port Isabel, the Fishing Rodeo’s president, the founder of the Fishing Rodeo, a well-known physician, and numerous other well-to-do residents. Predictably, the search party was not successful in their efforts to catch a glimpse of the sea monster. Burnell remained upbeat, however, and was quoted in the August 18th edition of the Brownsville Daily Herald as saying, “We know he exists and we believe he again will put in his appearance here.” He added, “When he does we will be ready to go after him.” 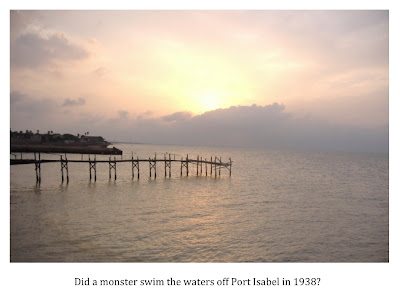 If the sea monster, whatever it was, ever did make another appearance along the south Texas coast it is not recorded. The story of the monster, as such tales often do, faded into history and was forgotten by most. You would be hard pressed to find anyone in Port Isabel today who has even heard of the sea monster sightings of 1938.

I visited Padre Island and Port Isabel back in the early 1990’s. I recall walking out on a long pier at sunset with the young lady I was seeing at the time. At the end of the pier sat an old man in a folding chair. He sat motionless and stared out at the open water of the lower Laguna Madre. He had no fishing pole or gear. He merely sat and stared out across the expanse of water. I knew nothing of the Port Isabel sea monster at that time or I might have worked my nerve up to ask him about it. I have since come to wonder if maybe this old man had been around back in 1938, had maybe even seen the creature himself, and was still patiently waiting for the monster to make another appearance.

I suppose, like the identity of the monster itself, I will never know.
Posted by Mike at 6:32 PM