Buffalo Bill and the Bones of Bigfoot

You would never know it from the large number of books and movies made about the era, but the days of the American “Old West” were shockingly few. Generally, the time period is considered to be the years following the end of the Civil War up to, and even this is very generous, the end of the Mexican Revolution in 1920; however, what the period lacked in longevity it more than made up for with the many historically important events that took place. The quest to fulfill “Manifest Destiny” was in overdrive, treaties with foreign nations were forged, wars were fought against and treaties forced upon native peoples, technology advanced greatly, and immigrants flooded west into the frontier. It was a time when the federal government struggled to maintain law and order in its territories and the people therein. Colorful characters were the rule of the day. One of the most colorful of all was William F. “Buffalo Bill” Cody. 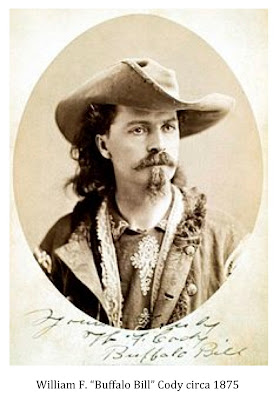 William Frederick Cody was born in the Iowa Territory on February 26, 1846. To say he had a diverse career would be an understatement. At one time or another, Cody is said to have been a trapper, bullwhacker, miner, Pony Express rider, wagon master, stagecoach driver, and hotel manager. He is best known, however, for being a buffalo hunter (hence his nickname), acting as Chief Scout for the Fifth Cavalry during the Plains Indian Wars (for which he won the Medal of Honor), and, of course, for his world famous Wild West Shows. What most do not know is that William F. Cody may have been presented with the remains of a sasquatch in 1871.

In his autobiography, The Life of Honorable William F. Cody, Buffalo Bill recounted the following interesting experience that occurred while he was still acting as a scout for the U.S. Army:

"While we were in the sand hills, scouting the Niobrara country, the Pawnee Indians brought into camp some very large bones, one of which the surgeon of the expedition pronounced to be the thigh-bone of a human being. The Indians claimed that the bones they had found were those of a person belonging to a race of people who a long time ago lived in this country; that there was once a race of men on the earth whose size was about three times that of an ordinary man, and they were so swift and powerful that they could run along-side of a buffalo, and, taking the animal in one arm, could tear off a leg and eat the meat as they walked."

“These giants denied the existence of a Great Spirit, and when they heard the thunder or saw the lightning they laughed at it and said that they were greater than either. This so displeased the Great Spirit that he caused a great rain-storm to come, and the water kept rising higher and higher so that it drove those proud and conceited giants from the low grounds to the hills, and thence to the mountains, but at last even the mountain tops were submerged, and then those mammoth men were all drowned. After the flood had subsided, the Great Spirit came to the conclusion that he had made man too large and powerful, and that he would therefore correct the mistake by creating a race of men of smaller size and less strength. This is the reason, say the Indians, that modern men are small and not like the giants of old, and they claim that this story is a matter of Indian history, which has been handed down among them from time immemorial. As we had no wagons with us at the time this large and heavy bone was found, we were obliged to leave it.”


What is interesting here is that Cody claims the thigh-bone was examined by a physician and determined to be that of a human. While medicine in the latter half of the 19th century was not anywhere nearly as advanced as it is today, you would think it would be unlikely for a doctor, in this case a surgeon, with extensive training in anatomy to mistake an animal bone for a human femur. A much more likely scenario would be the doctor being able to determine the bone was not of human origin but unable to identify the animal from which it came...kind of an “I don’t know what it is but know for sure what it isn’t” sort of thing. When you get right down to it there just are not any documented animals living in North America, then or now, whose leg bones could be misidentified by a competent surgeon as belonging to a human. Others found the account compelling as well. The evidence was convincing enough that the story got all the way back east to Yale College and one Professor Othniel Charles Marsh, head of the Paleontology Department, was sufficiently intrigued to lead fossil hunting expeditions into the area later that year in search of remains of these giants.

One of the continuous arguments used by those who do not believe the sasquatch is a real animal is that there is no physical evidence to support its existence. This is, of course, debatable as samples of scat and hair have been located that defy classification. Other evidence, like footprints, continue to show up as well. Something is leaving tracks, and even the most hardened of skeptics hesitates to say all such tracks could be hoaxes. Getting back to the original point, when skeptics say there is no physical evidence, what they are usually getting at is that no body or physical remains have been found or acquired. In the case of the Pawnee presentation of bones to Buffalo Bill, we may very well have had the evidence so many continue to seek. Put it all together and it is quite intriguing. Think about it. A well-known historical figure, who was very image-conscious, gave his eyewitness account of unusually large human-looking bones in his autobiography. A medical professional, admittedly unnamed, is said to have identified the remains as human. Add in the Pawnee legend of the huge and powerful bipedal creatures that hunted bison without the use of any sort of weapon, and it is truly compelling. Proof? Sadly, no, but compelling nonetheless. 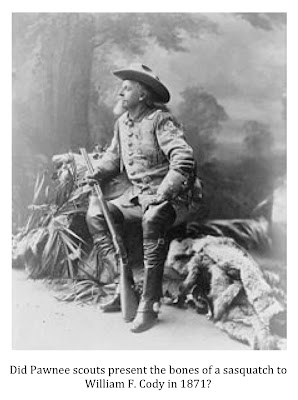 Separating fact from fiction when it comes to Buffalo Bill is not easy. He truly was an incredibly accomplished man but was also guilty of embellishing many a tale when it suited him. Still, in the case of the incident in question, I can think of no reason Cody would have fabricated the story. Cody was certainly guilty from time to time of telling tall tales in order to enhance his image for financial gain. He was one of the first heroes featured in dime novels and did all he could to maintain his rough and tumble reputation. His Wild West Show certainly did not give historically accurate accounts of battles and events that had transpired between the army and the Native Americans; however, these were the actions of a showman who was trying to entertain and sell tickets. The short section in his autobiography describing the event in question doesn’t seem to be the sort of thing Cody would embellish as it was not going to enhance his frontiersman image or help make his show more popular to the masses.

While the incident has the ring of truth to it, in my opinion, there really is no way to ever know for sure. Were the bones from a large primate or some other more common animal? Did the incident ever really take place at all? Again, unless someone is able to discover additional documentation of the event, we will never know. Regardless, the story has only added to the legend of William F. “Buffalo Bill” Cody and picked up steam among sasquatch enthusiasts over the last several years.

Truly, William F. Cody led a fascinating life. Alas, it could have been even more interesting if he had kept the bones presented to him by the Pawnee and sent them to a university for further study.

Just think, if he had done so, he might now be known as Bigfoot Bill.