According to an article posted on the Yourhoustonnews.com website, a red- bellied pacu (Piaractus brachyomus), a distant cousin to the piranha, was caught in Lake Conroe by a catfish angler last week.

The article, written by Howard Roden, tells the story of Kenneth Evans who was out fishing for cats on Monday May 2nd. Evans had been having pretty good luck but had no idea what he was about to run into when his rod bowed over for the ninth time that day.

“I was really startled,” he said. “I didn’t know what to think.”

The fish was 13 inches long and weighed in right at 3 lbs. The body shape of the fish, the orange colored belly, and the prominent teeth led Evans to the conclusion he had landed a piranha. According to Evans, the fish made a “weird sound” and clamped down on a stick presented in front of its mouth like a pit bull. 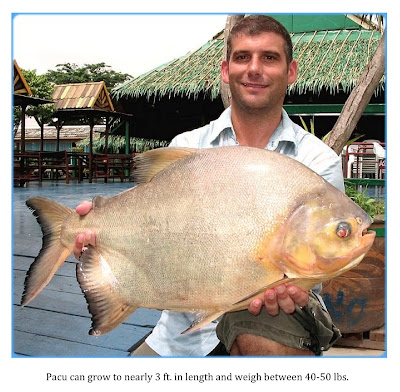 Game Warden Brannon Menkowsky is confident the fish is a pacu and not a piranha. The teeth are the key to properly identifying the fish according to Menkowsky. The piranha has razor sharp teeth meant to rip off bite-sized chunks of flesh. The pacu, by contrast, has very human-looking teeth that are designed to crush rather than rip. Pacu can be purchased legally and often are dumped into Texas waters once they outgrow their aquariums.

Menkowsky added that reports of piranhas, while not common, have come in to his office at least two other times over the last eight years. Both of these reports originated from Lake Conroe. A fellow Game Warden, Derwin Biggerstaff, says he gets calls about once a year about “piranhas.”

This is the second time in the last year I’ve heard of a red-bellied pacu being pulled out of Texas waters. As documented on this site here, a lady I went to college with reported to me that her son pulled a pacu from a private lake near Leander outside of Austin. She sent me the photo and even posted a short video on YouTube showing her son’s unusual catch. 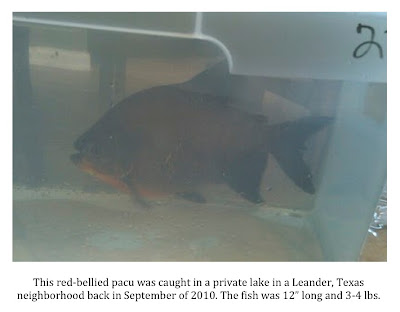 The pacu problem may be getting to a point where TPWD officials are going to have to address it. This invasive species is ravenous and will quickly put native species like bass and bluegill out of business if their numbers grow too large. I am aware I may be sounding like a bit of an alarmist but a recent episode of River Monsters documents that pacu can decimate native species, in this case tilapia, and even become dangerous to humans. While considered mainly vegetarians, pacu are actually omnivorous and will eat flesh. Jeremy Wade of the River Monsters program aptly demonstrates this fact as he documents attacks on New Zealand native tribesmen by this invasive species. The pacu has become known in the region as the “ball cutter” due to its preference for certain parts of the male anatomy. The Lake Conroe pacu bit a chicken gizzard meant for catfish. This would seem to prove that meat is not off their diet. I don’t point this out to insinuate that pacu will begin attacking swimmers; rather, I mention it out of concern that this invasive fish could decimate native species through competition for available food and by preying on their fry. 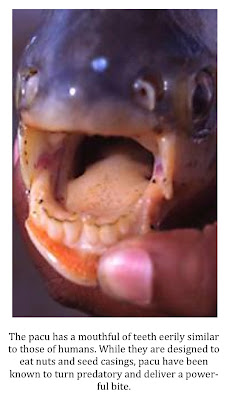 I cannot stress enough that releasing an exotic fish into public waters is a terrible idea. Owners do not want to kill their pets when they get too large. I get that; however, the potential harm that could be done to native species is just too great. It may sound cruel but, if a suitable home cannot be found for a pacu, it should be euthanized.

Anyone who catches a pacu or any other exotic fish species in Texas public waters should notify the Texas Parks & Wildlife Department immediately.
Posted by Mike at 11:47 AM