I have just returned from a weekend bear hunt in Upshur County, Texas. It was not a literal bear hunt, of course; rather, it was a trip to interview a witness who claims to have seen four black bears (Ursus americanus) on her property back in November of last year. The witness, who owns 80 acres that back up to the bottoms of Cypress Creek, told the story of how she followed her German shepherd around to the back of her house that night leading to the encounter with the bears. You can read the details of her original sighting, as written up by my friend Ken Stewart, here.

Ken and I arrived at the property of the witness shortly after lunchtime on Saturday 5/14. While Ken has known the property owner for years, this was my chance to meet her for the first time. She was as delightful a person as you could hope to meet and upon hearing her story in a face-to-face setting have no doubt she saw bears and not hogs. She gladly gave us permission to access her property and put up game cameras in the hopes of getting photos of the bears. Ken and I hiked the property for more than two hours and it is absolutely ideal. Behind the house is a pasture, tree line, and then another pasture. Behind the second pasture the land drops off into the bottoms of a small branch feeding Cypress Creek. Hardwoods and their bounty are everywhere and the area is rich with blackberry bushes and muscadine grape vines just about to ripen. The area is wonderfully suited for all manner of wildlife. 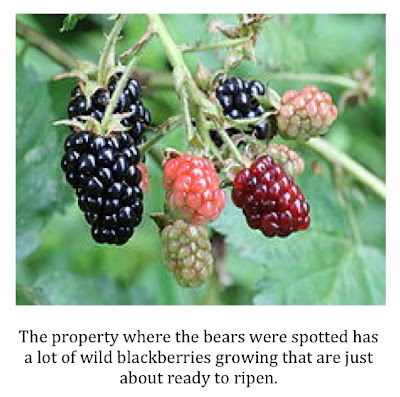 Ken and I chose a couple of locations where game trails converged to place the cameras. I had purchased a product meant to attract bears and applied it liberally, in liquid form and powder form, to the trees and vegetation in front of the cameras. The aroma was, indeed, very strong and have little doubt that if the bears are still in the area they will come in to investigate. The product came highly recommended and I have high hopes that it will do the trick. 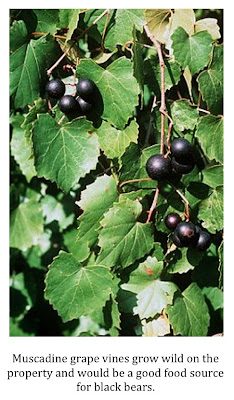 Ken and I had the good fortune to run into the gentleman who leases the pastures in order to run cattle. He was concerned about the safety of the property owner and, no doubt, his livestock and asked a lot of questions about black bear. We made it very clear that we were not bear experts before telling him that, if common sense is used, in all likelihood nobody has anything to worry about. For her part, the property owner is pleased the bears are there. She said she never felt threatened and likes the idea of their being around at least some of the time. It was during the course of this discussion that this gentleman shared an encounter of his own. He said that he saw a very large black animal of some sort in an area of heavy brush near the fence-line at the rear of the property. He was a bit perplexed as he could not identify it. He described it as being wider than a man and very heavy. He said that the animal would have been about chest high to him (I estimate his height at 6’0”) and probably weighed in the neighborhood of 500-600 lbs. He was sure it was neither hog nor bear. He couldn’t or wouldn’t speculate farther on what it might have been. He just said that, as a cattleman, he was used to seeing large animals and estimating weight. He said, “I don’t know what it was but I know what it wasn’t. It was no cow or bear.” The witness did not feel the animal could have been a hog either due to how high it stood. What it could be can only be speculated upon but it is interesting as this is a man who knows his animals. Hopefully, we’ll get a photo that explains this mystery as well. 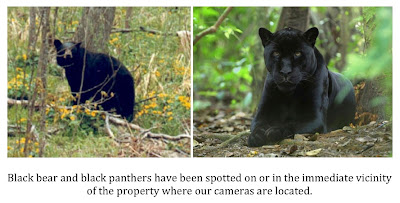 The entire area has a long history of cougar and black panther sightings as well. On this trip alone I spoke to three different people who, in a very nonchalant manner, described experiences with large black cats. Throw in a handful of sasquatch sightings and you have a very exciting research location. I will be sure to post updates as pictures from our cameras become available. It is going to be at least 4 weeks before I return to check on them.