I have a friend named Ken Stewart who lives in Upshur County, Texas. Early last year he related a story about a sighting of multiple black bears not too far from his home. Ken knew the alleged witness and said he would seek this person out in an effort to find out more about the sighting at his earliest convenience. Ken wanted to eliminate the possibility that the witness might have actually seen feral hogs in low light conditions prior to my posting anything about the sighting. Life being what it is, it was a while before Ken had a chance to look up the witness. It was worth waiting for; however, as the account leaves little doubt that the witness did indeed see black bears and not hogs. Ken’s write-up on the incident is below: 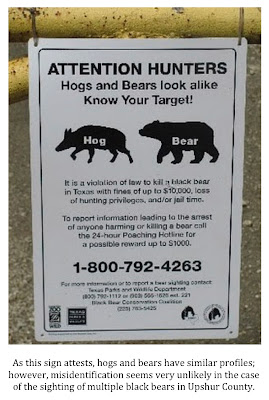 Word moves quickly in a small town -- even to former residents like myself. I found out about the sighting of four bears through my family. The encounter occurred in early November 2010 at about 2100. The witness' property backs up to the Little Cypress Creek bottomland in eastern Upshur County, located in northeast Texas.

I visited the witness last month and was told the circumstances of the encounter. The witness' home is located in a pasture on a working farm. A short corral fence surrounds the yard. The witness was feeding a large dog in the front yard at night when something unusual happened. The dog heard or smelled something which prompted him to leave his food and investigate the back yard. The witness followed and caught up to the dog, finding him looking through the back fence while wagging his tail. The witness thought this was odd and walked up to the fence to find two adult bears and two cubs standing just ten yards away. The area was well lit by two floodlights. In all, the encounter lasted about five minutes. At one point, the two adult bears stood on their hind legs. The witness described them at both being about five feet tall when standing. Each bear had black hair. The cubs' height at their shoulder was a just short of two feet while on all fours. The witness did not feel threatened by the bears and the bears did not show any aggression -- just curiosity. The bears eventually left, following a pasture road through a distant gate towards the bottomland. 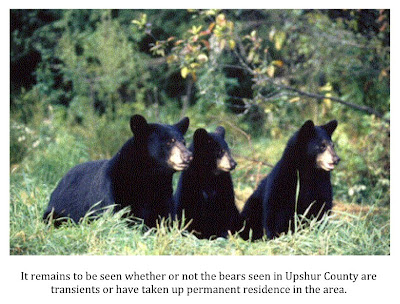 I asked the landowner if there was an explanation of the dog's friendly reaction to the bears. The witness believes that the dog had seen the bears in the past. It is possible that the bears came to the home to harvest apples from a tree in the back yard. I noted that there was a large stack of firewood stacked against the fence that would provide steps for the bears to cross over the fence.

The bottomland behind the home provides a favorable habitat for wildlife. When I first heard of the sighting, I decided to fly over the property and take photos to determine the type of trees present in the bottomland. I found that hardwoods were most prominent in the wooded area between the sighting location and the creek. It should be noted that Little Cypress merges into Big Cypress Creek, which feeds Caddo Lake. To my knowledge, this is the first eyewitness account of female bears in Upshur County in the past several decades. I have known the witness my whole life and believe the account. 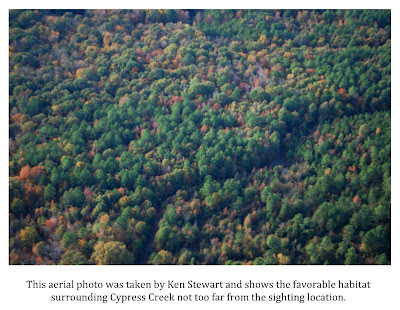 Due to the fact that the area where the sighting took place was adequately lit and the close proximity of the witness to the animals, misidentification doesn’t seem possible. It seems that bears have returned to Upshur County. Whether these bears were endangered Louisiana black bears (Ursus americanus luteolus) or Eastern black bears (Ursus armericanus americanus) that have wandered down from Oklahoma or Arkansas remains to be seen. The geographic location of Upshur County in far northeast makes either option plausible. 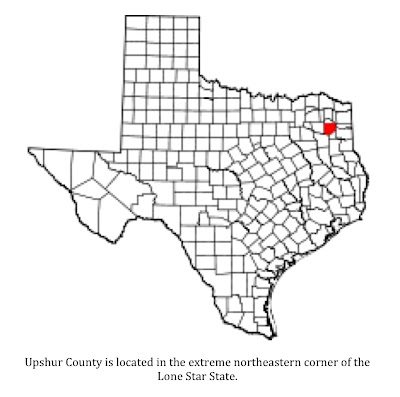 Ken has received permission to place game cameras on the property. I hope to meet up with him in the next two weeks to do just that. As a bonus there have been numerous reports of large black panthers in the immediate vicinity and a couple of sasquatch sightings to boot. I can’t wait to get those cameras out there.