Periodically, people in South and/or West Texas report sightings of giant flying creatures. Sometimes, the animals are described as huge vulture or raptor-like birds; however, some report creatures resembling prehistoric "pterodactyls". It is this latter category of sightings that I'm going to address presently. Could a small population of pterosaurs have survived to the present day and be living in the arid Southwestern region of Texas? Could these creatures be behind at least some of the thunderbird sightings coming out of the area?

There are some photos that have circulated around the internet for years that suggest the pterosaurs have survived into modern times. Some of these are shown below. 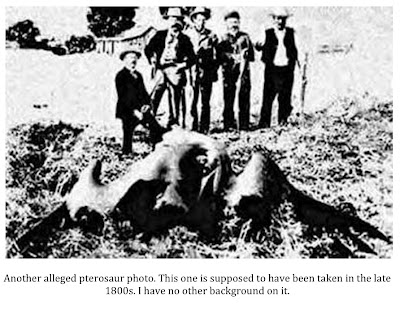 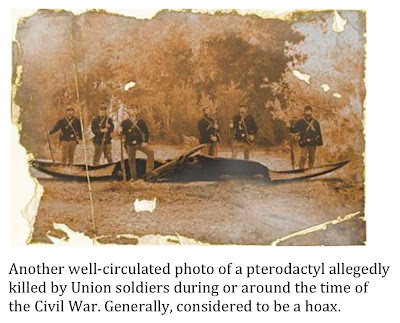 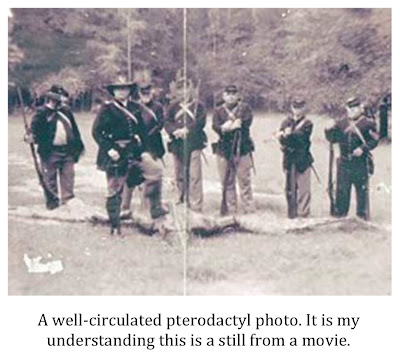 Only two photos have really intrigued me at all. One of these photos shows a rancher, allegedly from the 1950s, holding a small pterosaur-like creature. The other photo I find interesting is the famous "thunderbird photo" which shows a large pterosaur nailed to the outside wall of an old homestead with several men in the foreground. Is it possible? Could pterosaurs still live? 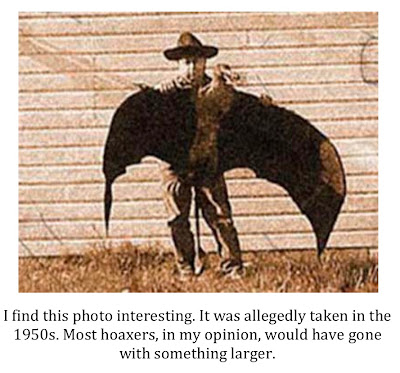 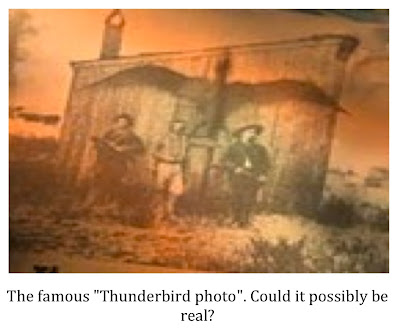 There is a candidate in the fossil record that matches the description given by some witnesses who claim to have seen living flying pterosaurs. Currently, paleontologists recognize the previous existence of four species of giant pterosaurs, one of which that soared in the skies above what would become Texas some 70 million years ago. Quetzalcoatlus northropi is thought to be the largest flying animal that has ever lived. These reptiles were truly massive with 30-50 foot wingspans and heights approaching that of the modern day giraffe. This "Dragon of the Clouds" had a long neck, slender toothless jaws, and a head topped by a large bony crest. This flying beast was slight in build and probably weighed in the 200 lb. range. This is exactly the picture most of us envision when the word "pterodactyl" or "pterosaur" is uttered. 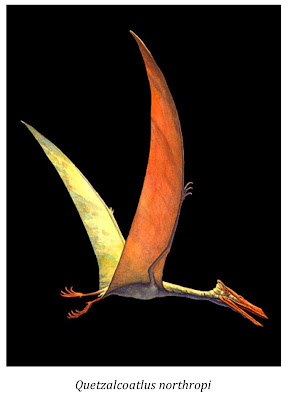 Could Quetzalcoatlus northropi still glide above the Lone Star State? Some anecdotal evidence suggests just that. In 1976 two San Benito, Texas police officers, Arturo Padilla and Homer Galvan, reported seeing what was to become known as the "Texas Big Bird". While that might invoke images of the Sesame Street character to most people, rest assured, the creature seen by these officers fit the description of a pterosaur. Shortly after the sighting by the two officers, Brownsville resident Alverico Guajardo had a frightening experience. About 9:30pm he heard a loud thumping noise outside of his mobile home. He looked out of his front door and saw what he described as a bird of monstrous proportions. But was it a bird at all? Guajardo said, "It's a bird but it's not a bird. He paused then added, "That animal is not from this world." Sightings of the "Big Bird" continued and tracks attributed to it were located. The tracks, measuring 12 inches in length were shown on a local television station. The resulting hullaballoo caught the attention of Texas Parks & Wildlife Department personnel who feared endangered whooping cranes might be mistaken for the "Big Bird" and shot. The TP&W issued a simple statement that said, "ALL birds are protected by state or federal law." In February of the same year, it was reported that several school teachers were "dive-bombed" by a creature matching the description of a pterosaur on their way to work. They reported the creature's wingspan to be at least 12 feet in length. There are other reports but you get the idea.

What are these people seeing? Is there a known animal out there that people could be mistaking for a pterosaur? I think this is very likely the case in many of the reports that describe large vulture-like feathered birds. I had an experience about a year ago when I did a double take initially thinking a massive bird was flying above me. I was out doing some maintenance on one of my game cameras in Central Texas in an area that was heavily populated by black vultures. There were several of these large birds circling overhead. I had paused to rest and was sitting on a log looking up at them when suddenly a bird three times the size of the others flew across my field of vision. At least it seemed the bird was three times the size of the others. It turned out to be a trick of perspective. I was focused on the vultures gliding a couple of hundred feet above me. The "giant" bird, it turned out, was flying considerably lower than these others. I realized this only when I saw this vulture light in the top of a large tree. Just for a few seconds I was taken aback by what my eyes told me was a huge bird.

Fine, you may be thinking, tricks of perspective might explain some of the sightings of enormous feathered BIRDS. Pterosaurs don't look like birds. What could explain these sightings. Well, sometimes birds do look like pterosaurs. As has been discussed here before, the frigate bird is a very likely candidate for at least some of the pterosaur sightings. Guest blogger Alton Higgins aptly summed up how this large bird could be mistaken for a pterosaur in flight. Revisit Alton's post here and check the photos below showing a female frigate bird in flight contrasted to what is purported to be a photo of a pterosaur in Papua New Guinea. As you can see they are all but identical. A person who reports a pterosaur in flight may very well be seeing a frigate bird.

But what of close-up sightings like that of Alverico Guajardo? These are more difficult to explain away. Certainly it is possible, if not likely, that hoaxes are being perpetrated in some cases. There are cases out there; however, where witnesses have been duly vetted and, seemingly, have nothing to gain by making things up. What animal could they be seeing that they are mistaking for a pterosaur? Up close no bird looks like a pterosaur. What about a bat of some kind? The wings of a bat are similar to what a pterosaur's would look like in that they are bare of feathers/hair. Bats in Texas are small, however, and no species would be big enough to be mistaken for a pterosaur. The largest bats in the world, the flying foxes, have wingspans of only 6 feet or so and are all found in other parts of the world and, therefore, not candidates for Texas pterosaurs.

What about some man-made aircraft? Standard sized airplanes are certainly not candidates for misidentification. That being said, ultralight aircraft have become very popular over the last couple of decades. The term ultralight refers to any one of several types of lightweight one or two person airplanes. The craze took off in the 1970s when many were looking for a cheap way to fly. In Texas, and most of the U.S., no license or training is required to fly ultralights. There are several different types of aircraft that share the ultralight designation, several of which that could conceivably be mistaken, at a distance, for a pterosaur. This possibility is further enhanced now that battery powered ultralights are becoming more common. These aircraft are virtually silent and eliminate the buzz of the small gasoline engines common to older models. Most would not expect an ultralight to fly silently and jump to another conclusion. 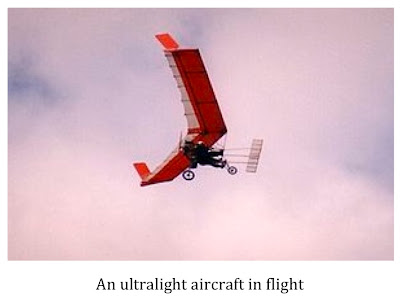 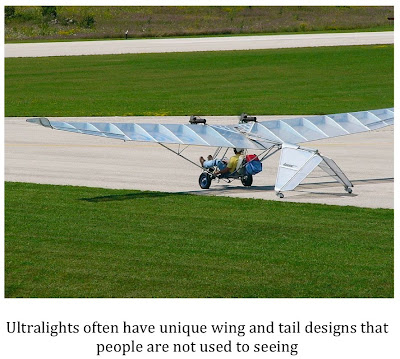 There are some other products out there that are actually meant to mimic pterosaurs in flight. Kites are among the most common. From a distance, the kites below could be mistaken for a gliding, dipping, and diving pterosaur. The string would be all but invisible to witnesses and could fool some into thinking they were seeing a live animal. Check out the product description for the Blackwing Brand kite seen in the picture below:

This prehistoric predator has great presence in the sky with a huge 11 foot wingspan. It's 3-dimensional body and tail both inflate and it's wings actually flap in the wind! Recommended 150 lb. Test Line, sold separately. Product size 11 ft x 15 ft. 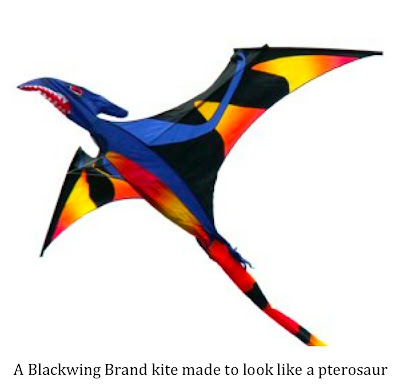 It isn't too much of a stretch to think a kite with an 11 foot wingspan and wings that actually flap could hoodwink some people. 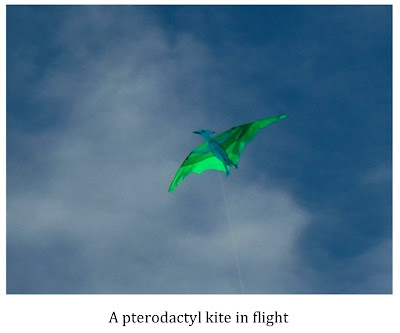 Finally, there are several radio-controlled airplanes on the market that mimic the look of pterosaurs. Check the video out below and the pictures below that. 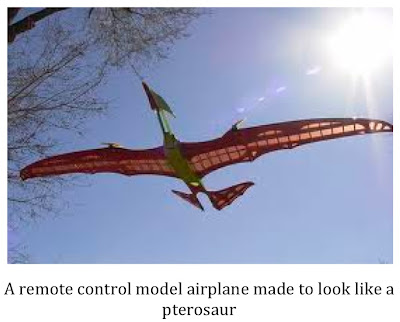 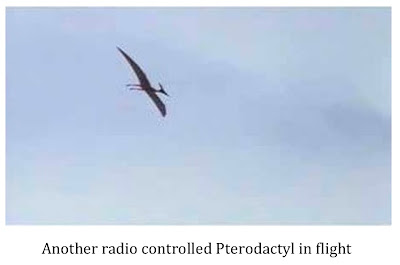 Again, one can imagine how easily a person, not expecting to see something like this, could be totally taken aback and think they saw a real animal.

Frigate birds, ultralight aircraft, kites, and model airplanes. Do these things explain away all pterosaur sightings? No. I do believe they could explain some, however. These are just some of the possibilities that need to be investigated when a witness reports a pterosaur sighting.

Personally, I have a hard time buying into the ancient pterosaur as an explanation for modern day thunderbird sightings. Now I do have some thoughts on whether or not giant birds; true, feathered birds, might fly the skies of Texas and other parts of the world.

But that is a post for another day.
Posted by Mike at 9:04 PM