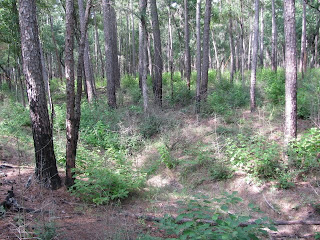 The woods of East Texas are a very strange place. Through the years, I have come to realize that there is just no telling what you might run into out there. I spent Monday through Wednesday of this past week out in the field and, once again, the trip had its share of weird moments.

Two other TBRC members had arrived on Sunday and established base camp at the same location we used on our last trip. The campsite is very remote. It is certainly not the kind of spot you get to by accident. To give you an idea, to get to the site you have to turn off a two-lane farm to market road onto a rural gravel county road. After driving several miles you have to turn onto a very seldomly used and deeply rutted red dirt road. From there you have to travel a good ways before turning off onto what I believe to be an old fire road. This fire road is very easy to miss and is almost grown over in spots. It is also a very tight squeeze for a full-sized pick-up to wind through the pines (hence my broken side-view mirror on the last trip) to a spot where the fire road runs out. It is at the end of this fire road that we established our camp.

Once camp was established, a fourth TBRC member joined us and the team was complete. We were stuck in camp Monday afternoon as a thunderstorm blew through the area. Once the storms passed, we geared up for a night hike. This is a technique we tried the last time out with some interesting results. While we did not succeed in catching a glimpse of our target species that night we did hear several long, powerful howls. These vocalizations, in my opinion at least, did not sound like a coyote. They were just too long in duration. In addition to being cooler at night, the night hiking enabled us to walk up on several types of wildlife, by using sound discipline and red lights only, that I don't think we would have been able to get close to during daylight hours. The night hiking also makes the chances of running into other humans practically nil. So, we resolved to try it again this time around. 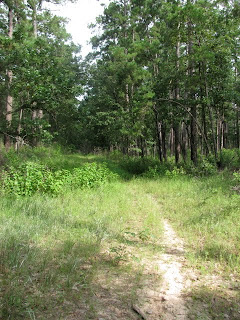 We left camp about an hour before dark and the weirdness began. We were driving to our entry point, about a mile and a half from the spot where possible sasquatch tracks were located back in May, when a large animal came strolling out of the forest on our left. The animal nonchalantly crossed the road and dove into the brush on the opposite side of the road. It was not a creature we were expecting to see. It was not a hog, bobcat, coyote, or deer. It was a donkey. Now keep in mind that we were miles from the nearest residence of any kind. I am aware of feral cattle roaming the woods of East Texas but have not heard the same thing about donkeys. If the donkey was domestic it had wandered a very long way from wherever home used to be. Certainly this was not the species we were searching for but it was an unusual sighting nonetheless. 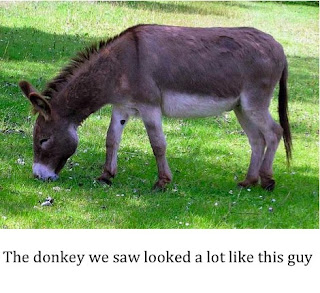 We proceeded to our target area and began our hike. It was miserably humid and warm. We were soaked to the skin within minutes. The hike covered about six miles total through the forest. We walked portions of abandoned pipelines, logging roads, creek beds, and game trails. The night was unusually quiet. We heard nothing unusual at all. We didn't hear much period, as a matter of fact. No coyotes, just a couple of owls, and one irritated fox. We saw even less.

We returned to base camp and sat down in a circle to discuss the hike, make plans for the next day, and take in some much needed fluids. It was about 1:00am when we spotted an odd light bobbing through the trees approximately 100-150 yards outside of camp. The light moved to the left and then back to the right and seemed to be slowly getting closer to us. Keep in mind the remoteness of our location. There was only one way in and we would have heard and/or seen any sort of vehicle as it passed the fire road that led to our camp. There are no roads or trails leading to the location so it seemed unlikely that a hiker had stumbled into the area. Plus, other than us, who would be out hiking at 1:00am? We couldn't imagine what somebody was doing out there but figured there was at least a possibility they were up to no good. We killed all light in our camp and waited to see what would happen. Curiously, less than a minute after we killed our lights our mystery light also winked out. We waited up for quite a while to see if it would reappear but it never did. One of our group woke up early the next day and walked out to the general area to see if he could locate any sign of our visitor. He found nothing. One thing he did figure was that our visitor might have been even closer than the 100-150 yards originally estimated. He felt the light was too bright and clear to be that far away from us. The area was simply too heavily wooded for a light to show as clearly as it did from more than 75-100 yards away. Our mystery light source puzzled us greatly and unnerved us slightly. We all decided that one mystery at a time was plenty and have now chalked up our mysterious visitor to the general weirdness that seems to be par for the course in the deep woods of Texas. 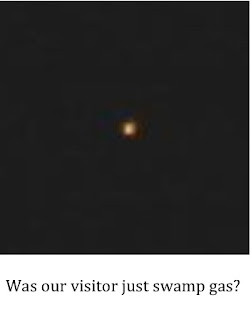 We broke camp on Wednesday around noon and the guys headed home. I made one more stop on my own, however, and visited the area where the mystery tracks were found last spring. I placed a game camera in the creek bed and hope to find out once and for all whether our track makers were humans or sasquatches. The camera faces a bend in the creek so that whatever comes around that curve is going to get its picture taken. I am very excited about the location and equally pleased at how difficult the camera is to see. It blends nicely into the tree on which it is mounted and the wall of the creek. I plan on returning in 4-5 weeks to retrieve the camera. I am really looking forward to viewing the images. There should be all sorts of wildlife snapped as this creek bed is full of animal tracks. I've spotted deer, hog, coyote, raccoon, opossum, and, of course, those mysterious barefoot tracks in this creek. If nothing else, I should have some great pictures of those species. If I'm lucky I might capture a cat of some kind as well. And who knows? I might just get the shot that solves the bigfoot mystery once and for all. 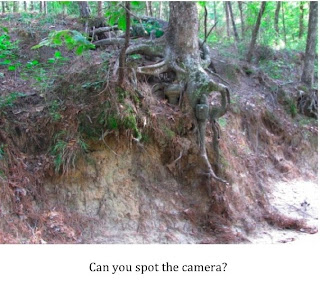 I trekked back to my truck and started to make my way home. I had not gone more than a quarter mile when two feral hogs darted across the road directly in front of me. They were dangerously close to becoming road bacon but didn't seem concerned as they trotted off into the forest. They were not very big. I would guess about 75 pounds each. Both were very dark to black in color. It was one more reminder of how you had best be paying attention when you are traveling the woods of the Lone Star State. There is just no telling what may decide to make an appearance.

The trip was uneventful as far as anything sasquatch related; however, I can't say it was uneventful. Donkeys, mystery lights, and suicidal hogs all ensured that the backwoods of this particular corner of the state would keep its reputation for being a very strange place.

So, now I have roughly a month to kill before checking on my camera. I will be publishing the analysis of the track castings taken from this area as promised weeks ago, reading up on some recent news stories, and catching up on correspondence. Hopefully, I'll have something very interesting to post in a month or so.
Posted by Mike at 10:57 PM