With all the excitement surrounding the recent discovery of possible sasquatch tracks in east Texas and my recent hiatus, I have not devoted much attention to the subject of out of place or cryptid big cats in Texas. A recent comment from a reader who claims to have spotted a large black cat in a rural area north of Dallas changed that. The email read as follows:

I saw a dark colored big cat today north of Dallas. It was on a rural road at dusk. We thought it was a dog walking down the dirt road at first. The closer we got the less it looked like a dog. We got about twenty feet from it and it turned into the brush. When it did there was no denying it was a cat. The tail was longer than the body. It was about the size of a big dog but lanky. It was black but very very dark brown. It seriously looked like a mountain lion. I have never seen a panther before to compare. It did not seem to be very afraid of the car but we weren't going very fast. I have found other similar posts of sightings in the area.

The text above was actually received as a comment to another post about big cats in the Dallas area. No other details were provided and I have not heard anything else from the poster of the comment. I would really like to hear from whoever posted this comment and get a few more details as to where this sighting occurred. If anyone has details on this I can be contacted at Texascryptidhunter@yahoo.com.

If the witness did indeed get to within twenty feet of the animal, there would seem to be little chance of misidentification. The statement saying the tail was as long as the body would seem to rule out any sort of canid, like a coyote, as well as the bobcat, the most commonly sighted big cat in Texas. The color would seem to rule out a bobcat as the culprit as well; however, it must be acknowledged that trying to identify the color of a moving animal at dusk can be tricky business.

The anecdotal evidence that mountain lions are making a strong comeback through out the state continues to mount. The stand the Texas Parks & Wildlife Department continues to take, claiming that the sightings are all misidentifications or escaped pets, becomes less tenable weekly.

What to make of the large black cats being spotted is something else all together. Theories range from the jaguarundi being the culprit to the possibility of a large unknown melanistic cat existing in the Lone Star State. As time goes by, I am becoming more and more convinced that there is some kind of large black cat out there. I personally know two people who claim to have seen black panthers in east Texas. I have another friend whose father says he saw a large black female panther with kittens crossing a rural road (also in east Texas). I firmly believe there is a biological basis behind these sightings. That being the case, it should be possible to obtain a photograph. 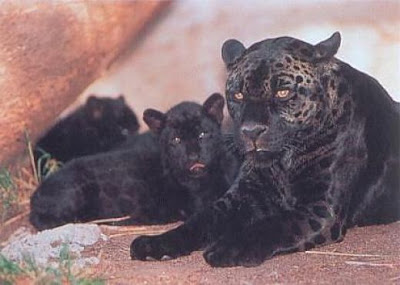 If you are a landowner who has seen a large cat on or near your property and wouldn't mind my placing a few game cameras on your place please contact me at the email address previously given. If a photograph can be obtained maybe we can figure out whether they are wild or escaped pets (if tawny colored) or just what the heck they are (if black in color). I would love to slap down a photo of a black panther on the desk of a TP&W official.

I suspect a lot of people would get some satisfaction from that as well.
Posted by Mike at 5:13 PM