Another Black Panther Sighted in Plano 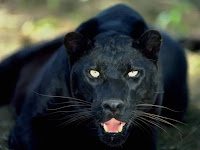 I received an email this week from a reader who claims his mother saw a large black cat run across Windhaven Parkway in Plano, Texas this past Monday July 26th. His original email reads as follows:

Hello. I just wanted to say my mom saw a black panther run across the road in the Plano, Texas area on Monday, July 26, 2010. Please e-mail me if you want more information.

I replied asking for more information. He got back to me with the following:

All my mother and I know is that the animal she saw was sleek, cat-like, pitch black, and very large. She couldn't see very well, because it was around 9:30 pm, but she swears it was a panther. The street was Windhaven, and it's either in Richardson or Plano. I don't drive yet, so I'm not sure. That's pretty much all she recalls.

When she got home she called the police and they said that Animal Control was already looking for the beast.

I have no proof, obviously, that this event actually occurred as reported but this is far from the first report of large panther-like cats in the greater Dallas-Fort Worth area. The Plano area in particular has been a hot spot for big cat sightings. While most will scoff at these reports, there seems to be a bit of a pattern developing.

It is true that these animals are being seen in highly populated areas. On the surface, at least, this seems, at best, unlikely. Each sighting did take place in areas near waterways with heavily wooded riparian corridors, undeveloped or agricultural land, or nature/wildlife preserves. This latest report is a prime example of this pattern.

Windhaven Parkway is only a couple of miles away from Lake Lewisville and also runs just north of the Arbor Hills Nature Preserve. In fact, Windhaven Parkway actually forms part of the northern-most boundary to the preserve. The section where the Parkway skirts the Preserve also just happens to be the most thickly forested and lonesome portion of Arbor Hills. While this particular section of Windhaven Parkway was not specified by the reader, I'm guessing this was the general area of the sighting. 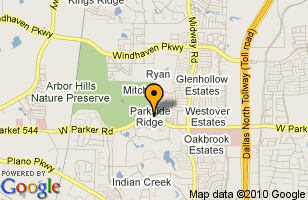 The City of Plano describes the Preserve as follows:

Located on the western border of Plano, Arbor Hills Nature Preserve is a 200-acre park featuring vast areas of natural beauty for walking, jogging, hiking, orienteering, and other outdoor activity.

Arbor Hills Nature Preserve is a natural respite within our suburban city. It is a special place left largely undisturbed where visitors can have the pleasure of being surrounded by nature and experiencing animals, plants and ecoregions found in North Central Texas.

Portions of the Preserve feature three distinct ecoregions. The Blackland Prairie, Riparian Forest, and Upland Forest are all present within the Preserve.

Wildlife found in the Preserve include egrets, hawks, woodpeckers, owls, snakes, turtles, and fish. Small mammals like rabbits, raccoons, and opossums are also present. The City of Plano's sight says that bobcats and coyotes are still present within the Preserve as well though rarely seen.

It is entirely possible that we have a case of mistaken identity. Maybe the reader's mother saw a bobcat cross the road. Bobcats can get pretty big after all. The witness admits it was well into the evening and visibility was not good. The reader also mentions he is too young to drive. Maybe this is just a teen having some fun at my expense. While I didn't get the feeling this was the case it is possible, I suppose.

Still, according to the reader, his mother was adamant that it was a panther. A pitch black one at that. Something else caught my attention. The reader said that his mother reported the sighting to police. The response to her report? The police said they were already aware of the situation and Animal Control was out looking for the cat. If factual, this would lead me to believe others had seen the animal and reported it.

Again, I can't verify any of this but the pattern seems to be holding up.
Posted by Mike at 12:00 AM