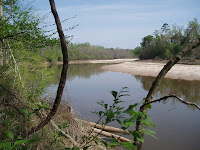 This past Tuesday an informational meeting was held in Lufkin, Texas regarding the possible designation of the Neches as a federally protected "Wild and Scenic River". A reader of this site attended the meeting and was kind enough to provide a report on what was discussed as well as his take on the issue. His synopsis is below:

Fortunately, I was able to attend the Lufkin meeting. The meeting started about 6:10 PM with introductions and a very informative overview regarding the "Wild and Scenic River" act. This presentation lasted 10 - 15 minutes and included a "public apology" regarding incorrect information provided in some of the handout information. The rest of the meeting was devoted to questions and answers. There was some "tension" on the part of several of those asking questions and I would rank the overall attitude of the audience as a mixture of disgust, disdain for federal involvement, and anxiety due to expectations of further loss of Texas/local control.

First pop out of the hat, the first "question" identified the simple reason most folks were attending the meeting. No more dams - simple as that. Additionally, no other control of the river was wanted or invited! No one offered support for further damming of the Neches River. In response, the only avenue offered by the speakers to prevent further damming was through additional federal involvement using the "Wild and Scenic River" act.

The perception of the audience seemed unanimous in that no one believed federal classification of the Neches as a "Wild and Scenic River" would do more than postpone the inevitable while, at the same time, open the door to future federal control over the river and surrounding lands. It appeared that everyone, including the speakers, believed federal control was not an option - one way or another it would be a fact. If attendee's had a prevailing attitude I would say it was one of disappointment but not defeat.

Comments after the meeting expressed opinions that, at best, meetings like this (held in Lufkin) were to: (1) inform locals that the only possible alternative to continued damming of the Neches River was to have the Neches designated as a "Wild and Scenic River"; (2) enlist local support to spend significant taxpayer dollars on a "Wild and Scenic River" study and (3) inform locals that after the study is complete and the taxpayers money spent the federal government will ultimately make the final decision.

I went to the meeting as an uninformed observer, completely unaware of any political undertones involved or that the meeting had anything to do with stopping future construction of dams on the Neches River. However, I am no longer uninformed regarding the designation of the Neches as a "Wild and Scenic River". Now, I know I cannot support such efforts - even at the cost of additional dams on the Neches River. With a dam most of us understand the process and have some realistic expectations, dismal though they may be, of what will be lost and gained both now and in the future.

As presented, my interpretation of the "Wild and Scenic River" approach offers no guarantees, makes no promises, offers no formal provision for dispute resolution, costs money from the very beginning (taxpayer dollars for the study and local money if approved), and if approved will ultimately give control of the river and surrounding lands to the federal government. I heard no denial regarding the possibility that a federal dam might come later. A lot of what was said went over my head, but what little I did understand was more than enough for me. Before it was over, I half-expected one of the speakers to say, "We can offer no promises or guarantees, but you know you can trust us."

In the meantime, my support will be for a Texas "Initiative" directed toward the prevention of further damming of the Neches - without federal involvement. As a history buff, considering Texas was a Republic at the time and under the circumstances Texas was admitted to the Union, a convincing argument might be made against any federal involvement with rivers, etc., which begin, totally flow, and end within Texas borders. It certainly seems worthy of further investigation - perhaps even our own "town" meeting though, as a senior citizen, I doubt I will see any result, regardless of the decision ultimately made or who makes it.

As I expected, it seems the Feds are going to have a tough time selling local landowners on the "Wild and Scenic" designation. Historically, the people of East Texas have viewed any Federal actions suspiciously. I suspect the current political climate has made the locals even more wary of the Federal Government.
Posted by Mike at 3:40 PM