The Incredible Memory Capacity of Chimpanzees 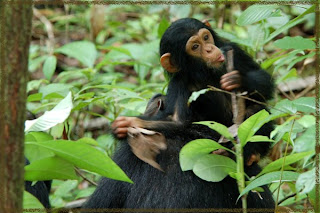 I've recently come across a couple of news items about the incredible memory capacity of chimpanzees. It seems chimps have both an amazing short-term and long-term memory. Read on for details.

The first item I ran across was an article by Matt Walker, editor of the Earth News section of the BBC News website. The article discusses the ability of chimpanzees to remember the exact location of all their favorite fruit trees. It seems their spatial memory is so precise that they can find a single tree among more than 12,000 others within a patch of forest. The study was conducted by Emmanuell Normand and Christopher Boesch of the Max Planck Institute for Evolutionary Anthropology in Leipzig, Germany. Also participating was Simone Ban of the University of Cocody in Abidjan, Ivory Coast.

"We were amazed by the apparent easiness by which chimpanzees discover highly productive fruit trees. Or how, after being separated from other group members for hours or days, they could join each other silently at a large fruit tree, like if they would have had an appointment at this place," said Normand.

The chimps not only remember the location of individual trees but recall which of these fruit bearing trees is most productive and when it is in season. They will often travel much farther to reach the more prolific trees. The details can be read in the article here but the conclusion reached is startling. "We think it is fair to assume that chimpanzees can remember the exact location of probably thousands of trees," said Normand.

Normand added, "In one respect, it is not surprising that chimpanzees have developed an outstanding ability to navigate their home range." Normand is alluding to the idea of what is commonly dubbed "ecological hypothesis" which theorizes that the need to remember and locate food sources could have been the driving factor behind the evolution of the primate brain. Specifically, the hypothesis says that a preference for fruit eating would stimulate brain development faster than would be seen in animals that are leaf eaters. Leaves are easier to locate while good fruit is harder to find and presents unique problem solving opportunities (breaking open nuts, etc.).

The second item regarding chimpanzee memory that I took a look at this week was a video I viewed over at Cliff Barackman's North American Bigfoot blog in which a captive chimp's short-term memory was tested. The study was conducted by the Kyoto Primate Research Institute in Japan. The test subject was a 7 year-old chimp. The task for the chimp was to view a screen with the numbers 1-9 in random locations briefly and try to remember the exact location of the numbers as quickly as possible. The task was made more difficult for the chimp as once the chimp touched the screen to place the number 1 in its proper location the other numbers were blocked out. If that is as clear as mud just take a look at the video below.


The chimp places the numbers in correct sequence every time after viewing their locations originally for as little as 0.65 seconds. The results indicate that at least this particular chimpanzee has a short-term memory that is far superior to that of nearly all humans. When the results of the long-term memory study on wild African chimps are considered in tandem with the results of this short-term memory experiment a rather impressive overall picture of the memory capabilities of the chimpanzee begins to take shape.

What can the results of these two studies teach us? Can we take any of this data and apply it to the alleged habits of North America's great ape, the sasquatch? Possibly. While it is almost universally accepted that chimps are incredibly intelligent they are not thought to be the smartest of the great apes. Most primatologists feel the rightful owner of that title would be the orangutan. If the size of the skull, and its brain cavity capacity, have any link to intelligence, and most scientists believe it does, then the sasquatch would likely be the most intelligent of the great apes by a wide margin due to its massive size. If chimps can remember the location of up to 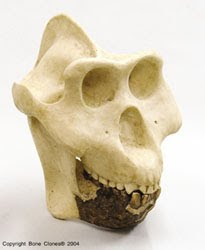 12,000 individual fruit trees spread out over hundreds of square miles the sasquatch may be the equivalent of a walking GPS unit. If true, is it any wonder it is so difficult to catch a glimpse of these elusive animals? They would remember the location of every cave, gulley, canyon, thicket, creek, draw, and water source in their territory. In short, they would know where all the best hiding places are located, and the quickest way to access them, making them nearly impossible to detect. To underestimate this ability while attempting to track down a sasquatch would doom the effort to failure.

There is something else that disturbs me about the remarkable memory of these chimpanzees. If sasquatches have the same impressive capacity for memory that chimpanzees do and if, and this one is a big if, they associate game cameras with humans then it might be a very long wait before we get convincing photographic evidence from a camera trap. Don't get me wrong, as has been stated unequivocally on this blog many times, I am a huge advocate of camera trapping. This method has proven itself to be a valid way of documenting rare and elusive species. However, if the sasquatch can remember the location of thousands of individual trees/locations then it would be relative child's play for them to avoid individual trees/locations that house cameras. This in no way implies a sasquatch understands what a camera does. However, an understanding of such a device would not be necessary to make the association between it and humans. Such a location would likely be avoided.

So, what is the solution? Should we all pull all our cameras out of the woods and just give up? Absolutely not. I still think camera traps may very well be the way this species is documented. After all, for a camera location to be identified and later avoided it would first have to be found by a sasquatch. This discovery could occur at the same moment the "discovery shot" is being snapped. If the sasquatch avoided the location from that point on it would not matter. What may be warranted, however, is a change in philosophy. Maybe instead of leaving cameras in the same locations for months or years at a time they should be moved periodically. This creates obvious logistical problems but if no shots are obtained from a specific spot after a certain length of time it might be wise to think the location has been noted by the target species and is now being avoided. Maybe moving the cameras long distances would not be necessary. I know the TBRC takes great care in choosing camera locations. Let's say a promising game trail has been chosen. Maybe the camera need only be moved a few hundred feet or yards to a new tree to be effective. It would take some time for the move, subtle as it would be, to be discovered by the target species. Maybe we could catch one these incredible animals unawares just once by doing so.