A Big Cat or a Big Dog in the Metroplex? 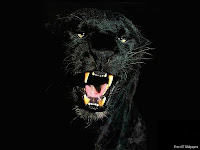 I received an email from a reader whose brother claims to have spotted a black panther/cougar in the Plano/Richardson area back in January of this year. I corresponded with this gentleman a couple of times to get details. The statements below belong to the reader and his brother, the actual witness, but come from several different emails.

Hi, my younger brother came over today with an interesting story. While driving home thru the Richardson/Plano Texas area he, his son, and a friend witnessed what looked like a panther crossing the street. He stated that a couple of other cars also witnessed it and one came to a stop. They lost sight of the cat when in crossed into someone's back yard. This was the Plano / Richardson area on 1/22/2010.

Got to tell you it really freaked him out LoL. He is kind of superstitious and he said the cat just looked so unreal. One thing he did mention that caught my attention was that the end of the cats tail really had a curl to it.

It happened at 11:40 am on Friday morning 01/22/10. It ran across the street and all the cars in the six lanes of traffic came to a complete stop trying not to hit it. It is hard to explain what it was because I don't think there is a zoo nearby. My first thought was a dog but then we saw it and it was about as tall as a Rottweiler but longer shaped like a cat. It was running with its tail, really long tail, curled between his legs I guess from fear of getting hit. Then I thought it was a mountain lion of some kind but it was dark like a panther. I felt like I was dreaming. It seemed so unreal like if someone was using a projector screen because it almost looked like some computerized shadow floating across the street. I say floating because it ran so weird. We tried to see where it went but there were a bunch of bushes behind a barred fence to where it ran behind those peoples house. If you need anymore info let me know and if you find it please let us know so my imagination will stop running crazy.


The spot of this sighting is near the intersection of E. Renner and Jupiter Rd. in Richardson, Texas. This area is very urban and would, on the surface, be a surprising spot to see a big cat. Having said that, it fits the pattern of other big cat sightings in the Dallas/Fort Worth area. Also, one would not have to go too far east to get to a much more rural area. Both Lake Ray Hubbard and Lake Lavon are lay only a few miles away. The landscape begins to get much more lonesome once you get to these reservoirs. A big cat sighting near these lakes, while unusual, would raise far fewer eyebrows. Likewise, this sighting is not too far from the Lewisville and Plano areas where other panthers have been reported. You can review some of the more recent sightings of big cats in the Metroplex area by opening the "Big Cats" label to the right.

Having said that, I will now play devil's advocate. I think the possibility of a misidentification must always be considered. The witness mentions that he thought the animal was a dog at first. Granted, a very large dog. The witness also mentions that the animal had its tail tucked between its legs, in apparent fear, as it attempted to cross the busy six-lane road. This is very dog-like behavior. Add to the fact that this was a very dark animal that resembled a "Rottweiler" and a "computerized shadow" and maybe we have a very large dog trying to cross the road. Often first instincts are correct. If the witness thought "dog" initially then maybe he was right. I decided to find out if any dog breed matched up well with the description the witness gave for the animal he saw that morning.

Certainly several large dog breeds can be dark to black in color and fit the overall description given. I did a little digging and found that the Great Dane is often black. These dogs are huge. An average Great Dane male will stand 24-36 inches at the shoulder, with the head higher than that, and weigh 130-165 pounds. This would make them the equal to a cougar in size. Neither are these dogs bred in a haphazard manner. They are matched up based on many factors with color being near the top of the list. Black Danes are generally bred only with other dogs from the black/blue color family. The desired result is a coat that is steel blue to glossy black with no white markings on the toes or chest. As you can see by looking at the photos below, the color of 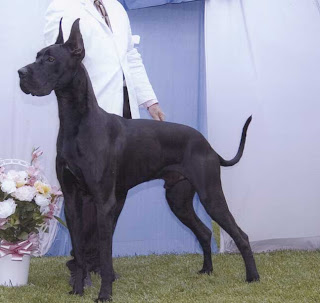 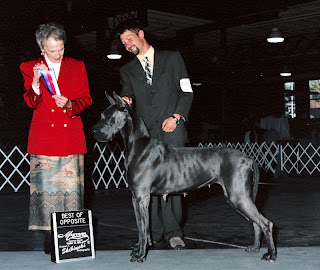 these Great Danes would be a match for most descriptions of black panthers. Great Danes bred for showing would also have had their ears clipped which makes them stand upright. This could give the dog more of a cat-like appearance. Also, unlike other large dog breeds like Rottweilers, Boxers, etc., Great Danes do not have their tails bobbed. So, the fact that the animal seen crossing the road had a long tail would not eliminate the Great Dane as a suspect. To suggest the Great Dane is responsible for all the black panther sightings in this, and other, states is ludicrous. In a metropolitan area, however, maybe it is a possibility that should be considered...or not. Just throwing it out there.

The fact that witness saw this animal in broad daylight makes misidentification less likely in my view. However, he initially thought the animal was a dog so it is a possibility that must be considered. The fact that other cougars have been reported in the area would seem to be supportive, albeit anecdotal, evidence suggesting that this witness did see a cat. Unlike the other big cats reported in the area, this animal was black. The plot continues to thicken.

Once again, I really want to hear about any sightings of cougars or panthers regardless of where they are spotted in the state. The best way to get in touch with me is via email. Please send your sighting reports to Texascryptidhunter@yahoo.com.
Posted by Mike at 6:45 PM