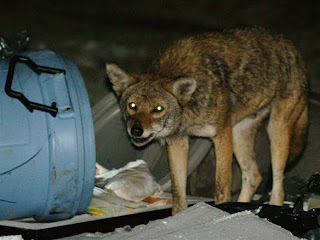 There is an interesting article by Chester Moore Jr. on the Port Arthur News website that asks a simple question. Are coyotes dangerous? Moore does a nice job of summarizing several coyote incidents, including the fatal attack on Canadian pop singer Taylor Mitchell. You can access the article here.

Moore points out that most wildlife agencies will tell you that coyotes are not dangerous to people and that attacks on humans are incredibly rare. Moore, himself, believes otherwise. He writes,"In states like California, for example, there were dozens of instances of coyotes biting people, attacking their pets while owners walked them on a leash, and other types of aggression that were soon followed by vicious attacks on people." Moore recounts a conversation he had with a wildlife official who explained how a coyote bit a man in an urban area of Texas recently but did not consider the incident an attack because he felt the predator was drawn in by the smell of grilling meat. Moore points out, correctly in my opinion, that "The guy who had a hunk taken out of him probably has an entirely different view." 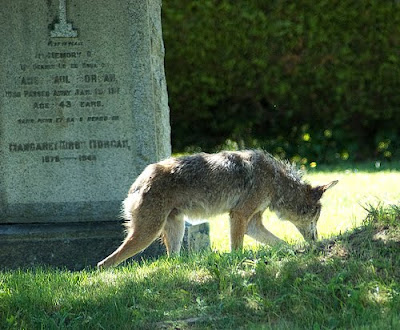 Are coyotes dangerous to humans? A few months ago I would have said probably not. Incidents seem to be piling up, however, that are making me think otherwise. I had a strange coyote encounter myself not too long ago that was a bit disturbing as it occurred on the heels of the attack on Taylor Mitchell. The coyote is an opportunistic predator that has few, if any, natural enemies left in the wild. They have proven to be resourceful and more than able to live quite comfortably in urban settings. They seem to be losing some of their fear of humans. If you have pets or small children and live in an area where coyotes are known to roam caution is definitely warranted. The combination of urban sprawl and exploding coyote populations make encounters unavoidable. Unfortunately, some of those encounters are bound to end badly.

So,are coyotes dangerous to humans? The answer, it seems, is yes.
Posted by Mike at 11:10 AM