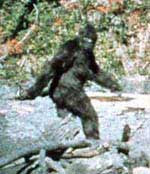 This week, yesterday specifically, marks the 42nd anniversary of the day Roger Patterson and Bob Gimlin filmed a large upright hair-covered bipedal creature at Bluff Creek in Northern California. The film set off a firestorm that has yet to abate to this day.

I remember seeing the Patterson-Gimlin film for the first time at a small theatre in East Texas. I was spending a weekend with my grandparents at the time. My grandmother took me to a movie every day of that week. I don't know if she was spoiling me, just liked going to the movies herself, or a combination of both, but I digress. I do not remember what movie we went to see but I do remember a short documentary that was shown before the main feature. The subject of the documentary was bigfoot and the P-G film was the centerpiece of the production. This would have been in the mid 1970s so the P-G film was still less than ten years old. Needless to say, the film made quite an impression on me. I have since viewed the film many many times but I will never forget that first impression it left on me.

Many attempts to duplicate and/or debunk the film have been made through the years. Not one attempt has been successful in recreating a subject as compelling as the sasquatch in the P-G film. You will hear claims that the film has been proven to be a hoax. This is simply not true. An example of this would the National Geographic Channel's attempt to recreate a convincing ape suit for their Is it Real? program. The suit they produced and the video created at the Bluff Creek film site were a total joke. The suit did not look real, the actor's gait was unnatural and clumsy, and the net result looked nothing like the P-G film. However, this did not stop the producers of the National Geographic show from declaring that their experiment proves the P-G film to be a hoax. This is the sort of "proof" that has been presented as evidence of a hoax at Bluff Creek in 1967.

The fact of the matter is that the more the film is studied by open- minded scientists, the more difficult it becomes to write it off as a hoax. There is quite a bit of compelling evidence pointing toward the P-G subject being a real living and breathing creature. Check out Meet The Sasquatch by Chris Murphy, Sasquatch: Legend Meets Science by Dr. Jeff Meldrum, and Bigfoot/Sasquatch Evidence by the late Dr. Grover Krantz for some fascinating reading along these lines. The evidence presented and the conclusions reached are fascinating. One of the best presentations I have heard on the likely validity of the P-G film came from the TBRC's Alton Higgins. The point is that there are many out there who feel the film does show a real animal walking across that sandy creek bed who back up their opinion with some very good research.

I, of course, can't say for sure that the film is legitimate. Something about it, and this is totally unscientific, has always rang true to me. There is something about how the creature moves that, while familiar and human-like, is alien. I have viewed a lot of alleged sasquatch videos and photos. There are only two other pieces of footage that I have seen that strike the chord within me that the P-G film hit and one photo that I feel might be the real deal. Again, my gut feeling does not prove anything. However, sometimes you have to trust what your eyes tell you.

I have always felt there was a very good chance the P-G film was legitimate. I felt this way even before I got serious about delving into this mystery. I feel even more

that way now after having had the chance to meet Bob Gimlin. He is a gentleman and has spent a lifetime outdoors. He has worked with and around animals his whole life. This is a guy that knows how an animal moves, looks, and smells. I believe he is telling the truth about what happened that day. Certainly, my impression of Mr. Gimlin does not totally discount the possibility of a hoax. Simply, my gut feeling is that he is telling the truth. If the film was hoaxed, I believe strongly, Bob Gimlin was not in on it.

Are we any closer today to determining whether or not the film is real? I doubt it. I don't know how many more ways this footage can be dissected and analyzed. I do think one must bear in mind that there is no way Roger Patterson could have anticipated the advent of digital technology and the level of scrutiny his footage would undergo. The fact that, despite the best efforts of would be debunkers armed with technological tools only dreamed of 42 years ago, the film cannot be proven a hoax after all this time must say something about the chances it is authentic. If it is a hoax it is truly a great one. Are we closer to documenting the sasquatch as a real species? I think so but the progress is painfully slow. Sniping among research groups, charlatans looking to make a buck, lack of funding, a skeptical to openly hostile press, and worries about how looking into this mystery would be received from employers continue to bog the search down.

So, here is to that 42 year-old piece of film. Maybe one day soon all the speculation about whether the footage is or is not authentic will be moot. I certainly hope so.
Posted by Mike at 9:27 PM