There is an interesting article on the Eurekalert.org website about how leopards, and large carnivores in general, may be affected by conversion of forested land to agricultural land and other changing environmental factors. While the article itself is interesting to me it was the method by which the Zoological Society of London, Wildlife Conservation Society, and the Tanzania Wildlife Research Institute obtained their data that caught my eye. These organizations conducted the largest survey of Tanzanian carnivores ever undertaken using over 400 camera traps.

"Camera traps provide a fantastic opportunity to gain knowledge on habitat use and spatial distribution of otherwise elusive and poorly known species," said Dr. Sarah Durant from the Zoological Society of London. Dr. Durant went on to call camera trapping a "powerful tool."

In addition to the information on leopards collected by this camera-trapping project, data was collected on bushy tailed mongooses. In fact, the first documentation of this species in one of Tanzania's most populated areas was obtained.

This study further validates the use of game cameras as a viable method of documenting rare and elusive species in a given area. This is exactly why the Texas Bigfoot Research Conservancy has undertaken Operation Forest Vigil, their camera-trapping project, in an attempt to document the sasquatch. This is also the reasoning behind my, albeit much smaller, camera-trapping project by which I am hoping to document the presence of large cats such as cougars in Central Texas. I just do not understand how anyone can discount this method as a waste of time and money. Rare and endangered species such as the Sumatran rhino, Sumatran tiger, the snow leopard of the Himalayas, the Okapee, and many others have been documented in areas where it was feared they might have become extinct. A prime example of the latter is the documentaion of jaguars in Arizona. Camera-trapping is here to stay and has been proven effective.

The trick is having enough cameras in the field to saturate a large area. The organizations working together on the Tanzanian leopard project placed more than 400 cameras in the field. Having a large number of cameras in the field is critical. With only a handful of cameras it truly becomes a crap-shoot as to what you are able to photograph. This is precisely the difficulty individuals and/or private organizations like the TBRC face when trying to put together a successful game camera project. The high end cameras needed to do the job right can cost anywhere from $300-$600 each. Add in the cost of gasoline burned traveling to and from camera locations, batteries, memory cards, protective boxes, chains, and locks (needed to discourage bears and thieves) and a large scale camera project gets pricey very quickly. 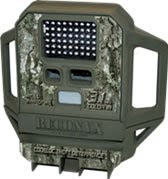 Critics claim that camera traps have failed to produce any photos of the sasquatch therefore either the method is flawed or the species simply does not exist. I would counter with two simple points. First, nearly all game cameras in the U.S. are pointed at deer feeders. They are not placed out in the most remote areas of the country where the sasquatch is most often encountered. Secondly, there has simply never been a camera-trapping project anywhere close to the scale of the Tanzanian leopard study conducted anywhere in North America. It is my opinion that if a major university or private donor stepped forward with the funding the sasquatch would likely be documented within a 1-3 year period. I truly believe that.

Here's hoping that funding will become available for such a project in the not too distant future.
Posted by Mike at 9:39 PM