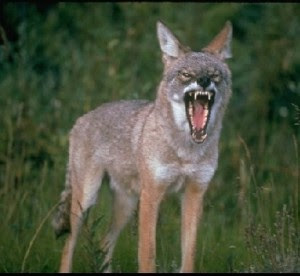 I caught the following disturbing article by the Canadian Press tonight concerning a fatal coyote attack in Canada:

A PROMISING young Canadian musician has been attacked and killed by coyotes while on a tour promoting her new album.

She was hiking alone on the Syline Trail in Cape Breton Highlands National Park when a pair of coyotes attacked her.

Tourists rushed to her aid when they heard her screams and found Mitchell bleeding heavily from mulitple wounds "all over her body", according to The Canadian Press.

"She was losing a considerable amount of blood from her wounds," paramedic Paul Maynard told TCP.

One of the animals was later shot by the Royal Canadian Mounted Police, but the other got away.

Park officials said it was highly unusual for coyotes to be involved in such an aggressive attack.

Mitchell was due to play at a concert after her hike and was on her first tour of the Candaian east coast.

This is an incredibly rare occurrence. Truth be told, I've never even heard of a coyote attack on a human. They are usually very cowardly when it comes to interacting with humans.

The whole incident goes to show that you must take nothing for granted when out in the field. Whenever possible, a partner should be present. The story really sent a shiver down my spine as I had a strange encounter with a coyote this past weekend. If you read down to my post from October 25th below you will note that I mentioned a very unusual and amazing experience in the last line of the article. The experience involved a coyote. I will write that up tomorrow. Once you read what happened, I think you will understand why what seemed to be a pretty cool experience now gives me a serious case of the creeps.