The Coyote and Me

Last Saturday I went to service one of my game cameras in a fairly remote area here in Central Texas. Usually, it is a simple and quick process to bait the area with food or scent, change the batteries and film, and reset the camera. Usually, the entire process takes all of about 15 minutes. I try to get in and out quickly so as to minimize human scent in the camera location and let things settle down and get back to normal as quickly as possible. Once the camera has been taken care of I will usually hike the surrounding area looking for animal sign. Sometimes, when I'm not in a hurry, I will find a quiet and secluded spot and just sit quietly for a while. I am a teacher and coach and live with three women so silence is a rare and precious thing to me. Several times I have had animals walk out of cover very near to me while I sat quietly watching. This is precisely what happened to me last Saturday.

I had discovered the camera in this particular area had malfunctioned. So, I removed it and went for a hike. I walked to the end of a rutted and little used road and sat down on a fallen tree. I wasn't concealed very well. The tree had fallen across the road. I sat down right in the middle of the log in what would be the middle of what remained of the road. There was thick brush on both sides of the road, however. I really wasn't too worried about being concealed. I was more concerned with my malfunctioning game camera. I removed the camera from by backpack and began to fiddle with it to see if I might be able to get it working after all. I guess I had been at it for about ten minutes when a coyote walked out of the brush to my left about 30 feet in front of me. 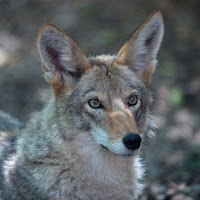 The coyote was not a particularly handsome specimen. He was a bit ragged looking. He looked like he might have recently rolled around in something. He had unusually big ears and legs that seemed a bit long. I'm guessing, due to these characteristics, he was fairly young and had not yet filled out or "grown into" his ears. He was mostly gray with specs of black on his back and sides. He had a lot of reddish orange coloration on the back of his ears and his legs. While I'm guessing he was a juvenile due to his gangly appearance, he wasn't particularly small. I estimate that he was about knee high to me at the shoulder with his head higher than that. I'm a bit over 6' 3" tall and pretty long legged so he was decent sized.

The coyote stepped out of the brush and walked out to the middle of the rutted road. For a couple of seconds he was in full profile to me. He failed to notice me as I was, unintentionally, downwind from him. He stood there with his nose high for a couple of seconds, I assume, sniffing the air. When he did turn his head and noticed me he jumped almost straight up and slightly back. It was obvious he had not realized I was there and his reaction was pretty humorous. It was then his behavior got a little strange. He did not run away. Neither did he take his eyes off me. He simply laid down where he was with his head on his forelegs and paws. I just looked at him for a few seconds expecting him to leave but he didn't. I had a digital camera in my backpack and decided to try and reach it so I could snap a picture. When I reached for my pack he did not move but growled. I froze and watched. He just lay there. I reached for the camera a second time. Again, the coyote growled but remained still. I really wasn't sure what to do. He did not seem threatening but didn't seem to like it when I moved. I don't know how long I sat there, a minute or two, I suppose, trying to decide what to do. It turned out I didn't have to decide anything. For no apparent reason, the coyote stood up and trotted back the way he had come. I continued to sit there for a few minutes more before I, too, got up and started back to my truck.

The more I thought about the incident the more unusual it seemed to me. I felt like I had just experienced something special. Now, after reading about the fatal coyote attack in Canada (see post below) I wonder if that was the case. How long would I have had to sit there if he had not gotten up to leave? How would the coyote have reacted had I stood up and tried to walk away? Valid questions, in hindsight, for which I have no answers.

I would be greatly interested to know if anyone else out there has experienced anything like this. You can respond in the comments section below this post or email me at texascryptidhunter@yahoo.com.
Posted by Mike at 4:51 PM