I fought off some unseasonably hot September Texas weather and a stomach virus in order to go out check on Camera #3 this past weekend. I removed the old film, loaded the camera with a new roll, and refreshed the batteries. I had the film developed that afternoon and found I only captured photos of deer and a raccoon. 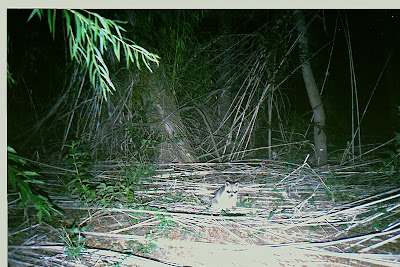 I was excited, however, by the fact that the camera fired 89 times. I am limited to only 24 pictures due to it being a 35mm film camera but the number of shots triggered tells me that I am in a good spot with this camera. I might have done better as far as the variety of animals photographed if bad weather had not come through the area two days after I deployed the camera. The severe weather, no doubt, caused a lot of swaying of vegetation and trees which triggered the camera quite a few times. Unfortunately, this ate up most of the 24 exposures on the roll of film. I am quite curious as to what I missed once the camera ran out of film. I plan on upgrading to digital cameras as soon as possible. This spot will be where I place the first upgrade.
Posted by Mike at 12:04 PM