I thought I would provide an update on my camera-trapping project...

I managed to get out and check Cameras 1 and 2 this past weekend. Camera 1 performed well. The entire roll of film was used giving me a total of 24 pictures. Unfortunately, no cats were photographed. While nearly all the pictures were of deer, I was encouraged to get a good photo of a coyote. The photo, below, clearly shows the coyote sniffing a tree, which I had sprayed down pretty good with some scent bait. This would seem to indicate that the scent I have concocted does appeal to predators. I will continue to experiment with different scents and food baits until I get something that appeals more to my feline targets. 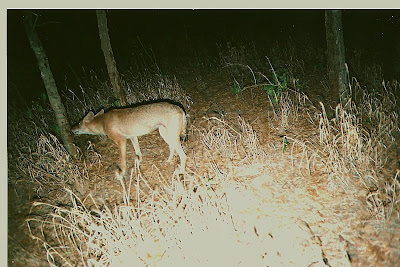 The results from Camera 2 were a huge disappointment. I failed to get a picture of any kind of animal at all. You may recall, if you read my post after setting this camera out, that I was very excited about the location of this camera. I was really anticipating some good shots of local wildlife. I would have thought the camera was not functioning properly except it did snap several photos. Mostly, I got photos of the trail with no animal in sight. Whether these photos were the result of false triggers or near misses due to slow shutter speed I can't say. I was shocked to get a series of photos of a couple of hikers. I would not have guessed I would get any human activity in this spot at all. Fortunately, the hikers did not take the camera. As a matter of fact, judging by their position in the pictures, they never even saw the camera.

I left Camera 1 in place with new batteries and film, as it has been very productive. I refreshed the batteries and film in Camera 2 and left it in place as well. Despite the lack of productivity it really seems like a perfect spot. If it produces nothing after four more weeks I will relocate it. I have found some great looking spots for future camera deployments in the same area.

Camera 3 is due to be refreshed in two weeks. I really liked the spot where this camera was deployed. I hope it works out better than the location of Camera 2.
Posted by Mike at 10:09 PM