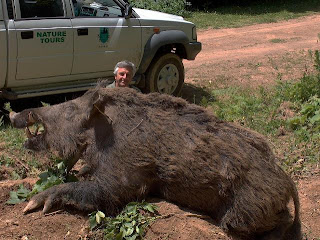 Rumors have been flying around the Lone Star State regarding the shooting of a giant hog near Conroe, Texas. According to the email that has been making the rounds, an 1,800-pound wild boar was shot on the eastern outskirts of Conroe near the Lone Star Executive Airport. Many reports of property destruction due to wild hogs have come in from this area and pigs have been seen crossing high traffic areas for years in this vicinity. I had my doubts about this story from the start. I keep up with the goings on in East Texas pretty well and felt I would have heard something about this giant. It turns out I was right. According to The Courier of Montgomery County the boar was shot and killed in Turkey in 2005. The enormous hog was taken down by a .300-caliber rifle and weighed in at 781 pounds. This made it the largest hog ever taken in Turkey.

Tales of giant feral hogs have become quite common in the South. Many are familiar with the story of “Hogzilla”, the hog killed in Georgia in 2004. Originally thought to be 12 feet long and over 1,000 pounds, “Hogzilla”, according to National Geographic experts, who unearthed the 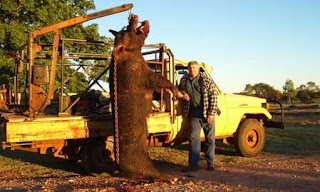 carcass, was only 8 feet long and weighed a mere 800 pounds. This would make it at least the
equal of the hog taken in Turkey in 2005. Just last year, according to stories and photos circulating on the internet, an 11 year old boy killed a 1,051 pound hog that measured 9 feet 4 inches long. This claim, to my knowledge, has yet to be verified by Texas Parks & Wildlife officials. Even if the size of that hog turns out to be exaggerated as well, there is little doubt it was one huge pig. Wild hogs in the South continue to flourish and get bigger. It is true that most hogs in Texas top out at around 300-350 pounds, however, reports continue to come in from hunters and others of hogs that are much bigger. 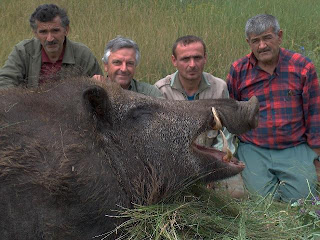 As you can see, I am interested in more than just bigfoot reports. I am intrigued by all the mystery animals that may inhabit Texas. The list of these animals would include the ivory-billed woodpecker, black panthers, jaguars, the chupacabra, giant freshwater catfish, giant alligator gar, and giant hogs. I intend to discuss any and all of these cryptids at one time or another on this blog. Feel free to email me with any photos or stories regarding these, or any other, unusual animals.
Posted by Mike at 6:34 PM