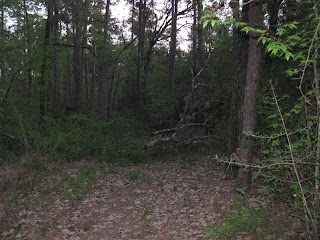 I spent the past weekend hiking and road running in the Sam Houston National Forest deep in East Texas. Unfortunately, I don’t have much to report. I did walk up on large animals twice over the weekend but never was able to get a look at either. The first animal high tailed it when I got within twenty- five yards of it. I’m 99% sure it was a deer. The second time was a little more interesting. The animal was deep in brush only fifteen yards or so from me. It moved as I approached but only a little way. When I moved toward it, it would give the same amount of ground. It kept its distance but never did, that I could hear, move off completely. I played this game for fifteen minutes or so before walking off the trail and into the brush. I never was able to get a glimpse of whatever it was. 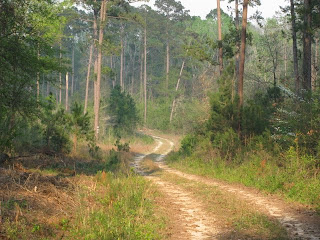 I did run the roads at night with video camera running. Unfortunately, all I captured were three skunks and one opossum. There were very few animals out at night. Usually, deer are all over the place but I didn’t see even one over the weekend. I am going to attribute this, at least partially, to the fact that it was a spring break weekend and the woods had an unusually large number of campers around. I’m guessing that most of the larger fauna retreated much deeper into the forest and as far away from the human element as possible. It is a theory anyway.

Despite the lack of success as far as my main objective, it was a beautiful weekend to be outside. Temperatures were in the high 70s to low 80s and the nighttime lows were in the low 50s. It beat sitting around watching television all weekend for sure.
Posted by Mike at 8:45 PM