Tool Use by Chimps and the Wood Knocking Connection 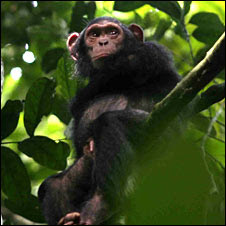 It seems that a new and surprising discovery regarding the behaviors, intelligence, and ingenuity of the great apes is being made on an astoundingly regular basis of late. This past week scientists revealed a startling discovery regarding chimpanzees. In a study published in the International Journal of Primatology, scientists in the Republic of Congo have reported that wild chimpanzees arm themselves with large crafted clubs made from branches to pound the nests of bees in order to gain access to the honey inside. In addition, these same chimps also put together “toolkits” made up of different sized wooden implements to help in their quest for this sweet treat. You can read the BBC news article, and see some pretty amazing video footage, on this discovery here.

Primatologists have long been aware that chimps love honey and will go to great lengths to get at it. Previous studies have noted how these apes fashion and shape sticks to dip into or pry open nests. However, until now, no one knew just how far chimpanzees would go to gain access to this honey. Dr. Crickette Sanz, of the Max Planck Institute of Evolutionary Anthropology in Leipzig, Germany, said, “It seems these chimps in central Africa have developed more sophisticated techniques for getting at the honey than populations in eastern and western Africa – maybe it is some kind of regional feature.” He added, “These nests are tough to get into – they can be at the top of the forest canopy, at the end of a branch – and the chimps will go up there and hang at all sorts of precarious angles to get to the honey, using these clubs in any way that they can to access it.” Video footage, taken over four years of observation by the researchers, shows the chimpanzees poundings these concrete hard nests 1,000 to 1,500 times. Researchers observed some chimps take well over 1,000 swings in the morning, stop and rest several hours, and then return in the afternoon to take another 1,000, or so, swings before finally breaking through and gaining access to the sweet honey. 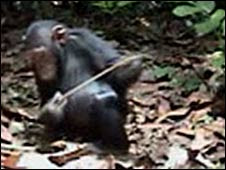 The chimpanzees of the Congo are also using tools of a more subtle type in their bee hive raids. David Morgan, one of the co-authors of the study, from the Wildlife Conservation Society and Chicago’s Lincoln Park Zoo, said, “One of the most exciting aspects is that they are using multiple tools to access the honey that is in these hives. Morgan and the other researchers noted the use of “toolkits” made up of the large pounding clubs, smaller and thinner “dipping wands”, and smaller sticks used for gaining enough leverage to open a hive. Researchers observed the chimps fashioning these tools and then set them aside for later use. “They cache them in the canopy”, said Dr. Morgan. This behavior seems to point to forethought and an understanding, at least on some level, of the future. This very behavior was reported a few weeks ago in a study of a captive chimp, housed in the Furuvik Zoo. The chimp, named Santino, was observed collecting and fashioning throwing sized rocks in the morning, creating a hidden cache of these rocks, and then accessing and throwing them at zoo patrons in the afternoon. Now that such a similar behavior has been observed in wild chimpanzees, it seems to me, the conclusion can be drawn that the great apes do consider the future in a way much more complex than previously thought. There is obviously much more to the great apes than previously suspected.

Armed with this new information, sasquatch researchers may want to take a second look at the “wood knocking” phenomenon. To my knowledge, no witness has ever actually seen a sasquatch rapping a large limb against a tree. However, it has become a commonly held belief that, somehow, these wood knocks are connected to the sasquatch mystery. The sounds of wood being pounded on wood in a rhythmic manner in very remote and isolated areas has been reported, and recorded, many times. I have heard these knocks myself while out in the woods of East Texas. The times I’ve heard wood knocks the most clearly have been in the middle of the night in extremely remote areas where it is highly unlikely other humans were present. Most of the theories put forth by researchers who believe the sasquatch is behind this wood knocking phenomenon center around it being a means of communication of some kind. Others have hypothesized it is actually an attempt to intimidate and drive off human intruders. Perhaps we can now add a new theory. It is possible, after observing the chimpanzees of the Congo pounding bee hives in search of honey, that the wood knocking heard often in the deep woods of North America is actually some sort of food searching activity. Could sasquatches be pounding on trees in an effort to get to some sort of food source like termites or other insects? Porcupines, bears, and other animals strip bark from trees in searches for food. These animals have the benefit of claws to get rid of the bark and to the insects. Assuming the sasquatch is at least as intelligent as the known great apes, and has no claws, it isn’t too difficult to imagine one using a crude club to knock the bark off trees and gain access to whatever food stuff might be found inside.

Indeed, the more we learn about the great apes and their cognitive abilities, the easier it is to believe that a rare and elusive species such as the sasquatch could exist in the most remote forests of North America and the world.
Posted by Mike at 11:21 PM