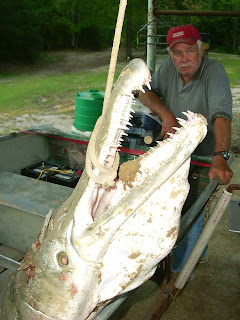 A fellow I work with related an interesting story to me a couple of weeks ago. He had just found out I was from east Texas and that I really enjoy bass fishing. He had traveled to Toledo Bend Reservoir on the Texas/Louisiana border on his spring break a few years ago. His plan was to fish the lake hard every day for a week in search of a trophy large mouth. His third day on the water he was fishing an area not too far from the Mid-Lake Campground. He’d had some luck in this area the previous day; he had pulled several 2-3 pound fish out and had hooked something large that broke him off on a submerged stump before he got a chance to see it. He had returned to see if he could coax this potential trophy to bite again. As he trolled quietly into his target area he spied a large lay down he had missed the previous day. The log lay in about three feet of water and seemed to be an ideal spot for a hungry bass to be lurking. He flipped his spinner bait past this target, reeled it up so as to bump the log, and then let the lure flutter down to the bottom before slow rolling it back toward the boat. He made a dozen or so casts to this log without getting bit. He was ready to move on but decided on one more cast. However, as he prepared to make his cast the “log” flipped a massive tail and slowly swam away. He sat stunned as a massive alligator gar cruised out of site. “That was the biggest fish I’ve ever seen. It had to be nine or ten feet long and two and a half to three feet thick”, he said. I won’t exaggerate the extent of my relationship with this gentleman. I really don’t know him very well but he doesn't seem prone to exaggeration. However, even if he is off a bit on the size of the gar he saw it must have been massive. After all, the man actually made casts to it thinking it was a log. 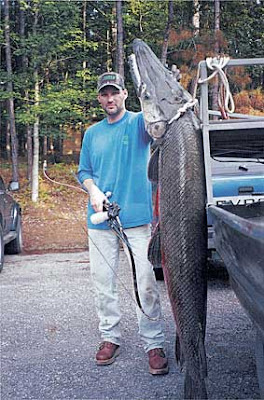 The alligator gar is a fearsome looking pre-historic fish with a head full of razor sharp teeth that is prevalent through out the south. It commonly reaches lengths of six feet or more and can weigh in excess of three hundred pounds. It is easily the largest fresh water fish in this part of the country. A few stories of attacks on humans float around from time to time but they are dicey accounts at best. The alligator gar does not see humans as prey. Rather, most injuries result from fishermen trying to haul in a big gar. A large gar can inflict a pretty serious bite while thrashing about on the floor of a boat.

The largest alligator gar on record is a 350 lb. behemoth taken in the 1930s from the Saint Francis River in Arkansas. Rumors of larger gar persist, however. The bayous of Louisiana and several reservoirs in Texas are said to hold incredibly large fish. The Trinity River just east of Dallas is also a hot spot for serious fishermen seeking big gar. Some of the tales about these monsters are as interesting as those of the alleged giant yellow catfish said to haunt the deepest portions of some southern reservoirs.

I suppose the alligator gar is not a cryptid in the truest sense. After all, it is a documented species. However, it is possible that truly giant gar, if they really exist, could turn out to be a new sub-species. True cryptid or not, I am fascinated by truly giant fish. I will post any reports or photos I come across of these awesome looking fish. In the meantime, if you’ve encountered a truly big gar let me know about it. I would like to post your story and pictures. 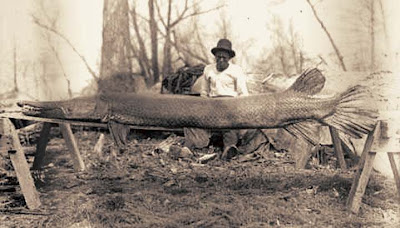