The Big Thicket Gets A Boost

Good news for The Big Thicket of SE Texas. According to news reports, the National Preserve will be growing by 6,600 acres. This new addition is located just north of Beaumont and was acquired using donated funds from private businesses and foundations and monies collected from environmental fines by the U.S. Attorney's Office. The new territory is a great wetland area made up mostly of swamps, creeks, and slow moving bayous. 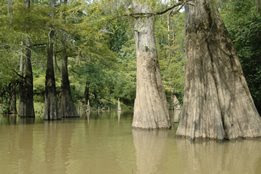 This is great news for all wildlife in the area. 6,600 acres is not a massive tract of land but it is a pretty good chunk that will help insulate interior areas of The Big Thicket Preserve. See the article below for full details.

The Big Thicket to Increase in Size

BEAUMONT, Texas (AP) — When Pete Gunter took a boat tour of the Big Thicket's latest land acquisition recently, he saw concrete results of years of work and struggle by a core group of supporters. 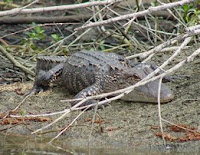 Gunter, Big Thicket Association past president and author of books about the Neches River, marveled at the beauty of the Southeast Texas swamps around Beaumont.

"It just isn't getting out — it's Texas' best kept secret," he said. Gunter firmly believes that if the rest of the world knew what the region had to offer in terms of scenic beauty and outdoor sporting opportunities, it would beat a path to the region.

"You've got one boat — you should have six and they should be serving meals," he said.

The "one boat" to which Gunter referred was the Cardinal Neches River Adventures vessel transporting about 30 Big Thicket supporters, cheerleaders and employees on a tour of a newly acquired tract on the east side of the Neches River just above Interstate 10.

The U.S. Parks Service and The Conservation Fund were celebrating the addition of the 6,600-acre parcel. The Conservation Fund acquired the land through donations and funding from a variety of private businesses and foundations, as well as environmental fines from cases prosecuted by the U.S. Attorney's Office. They then turned the tract over to the Thicket.

As the boat glided slowly and quietly up 10-Mile Creek amid jumping fish and lurking gators, the Fund's Julie Shackleford expanded on some of the amenities the new addition would bring to the region.

While the lower portion of the tract consists mainly of swamps and bayous, the higher elevation Houseman property, near the confluence of the Neches and Village Creek, should have good prospects for hiking trails.

Wetlands and bayous, most of which is not really well suited for hiking, nonetheless provide excellent canoeing and kayaking opportunities.

Shackleford said a book coming out in the fall, "The Neches River Users' Guide," will profile the meandering waterways branching out from 10-Mile Creek and should attract boaters to the Thicket.

Gunter said an important part of developing ecotourism businesses will be partnering with local government.

"One reason I came down here today was to talk to the mayor of Beaumont about economic opportunities (in the Big Thicket)," he said. As timber and oil cease to be the major part of the economy they once were, he added, the land they once used is left vacant.

Gunter said he did not want to imply that ecotourism could solve the region's economic woes — but it could be a significant part of a diversified economy that would enhance the quality of life in Southeast Texas at the same time it generated revenue.

Others on the tour spoke of the importance of wetlands to the region for flood control and as a stopping-off point for migrating wildlife, a situation that creates another ecotourism market.

Gunter said the next few years will be crucial for the preserve. As timber companies have divested themselves of their land holdings, the property is ripe for development.

It is important for the Big Thicket to acquire more land along its outer edges to preserve the wild character of the preserve.

"You don't have much of a wilderness experience if you can see the Lake of Fire Tanning Salon from the hiking trail or the campsite is next door to Bubba's All American Digital Carwash," Gunter said.
Posted by Mike at 9:07 AM