Fact or Fiction? The Government is Releasing Large Predators in Texas

Periodically, I receive an email that addresses a topic that I think is worthy of discussion on the blog. I received an email back on February 3rd that I feel falls into this category. It involves a story I have heard many times over the years. I have attached the email in question below.

So I stumbled across your webpage earlier this evening while obsessively googling mountain lions. I live in Pilot Point, TX, super small town in the far northeast corner of Denton County. The town is along the northeast side of Lake Ray Roberts. I've lived in this town my whole life, and have heard many stories of Mountain lions, but one story has seriously intrigued me and I need your help. It was brought up to me again tonight, which led me to google and then to you.

It's a very known fact around here that we have mountain lions (this is what we refer to them as), but if you ask any wildlife and parks people or game wardens they say that we don't and it isn't true. So, the story goes back in the early to mid 90’s this guy in southern Oklahoma was catching wild hogs, feeding them and releasing them into northern Texas. No clue why. That part isn't included in the tale. As a result, the population of wild hogs grew to insane numbers and they put a bounty on them. Something like 15-20 dollars for a pair of ears. After they realized this wasn't working, it is said, that "they", I've also heard "a guy" released 6 mountain lions (3 males and 3 females) in far north central Texas to "try to control the hogs". But of course, the wildlife and parks people and "those government people" didn't want the public to be aware of this, as not to frighten them. And that's why they deny any accounts of mountain lions.

I don't want to throw out this possibility, because I’ve heard of this tale for years now and from multiple people, and I also don't understand why mountain lions existing here is so denied, when it is so known that they are here among the public. But yes it sounds insane and I cannot find any valid information on this.

Please tell me if you think the old town folk around here are just crazy.

Kodi relays a rumor that has become something of an urban legend here in Texas. The whispers that the Texas Parks and Wildlife Department, the Federal Government or some other entity has released large predators in the state have been around for a while now. The story varies slightly each time I hear it (this is the first time I have heard an Okie blamed for our feral hog problems in Texas, lol). Sometimes it is wolves that were allegedly released, other times cougars. I have even heard some claim that jaguars were the predators released. The reasons for the alleged release of these predators are usually thought to be an attempt to control the feral hog population or a simple reintroduction of native species that once called the Lone Star State home. The reason for the secrecy most often given is that the public would likely not handle the idea of potentially dangerous predators being released in their woods and river bottoms very well. 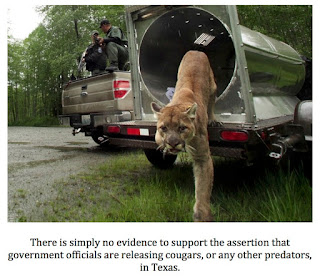 The strangest twist on this rumor I have heard comes from a gentleman I know in Montgomery County, Texas who swears that a friend of a friend received a visit from two “government employees” after he had lost several cows to an unknown predator. According to my acquaintance, these government men paid the rancher roughly twice the market value for his lost livestock in cash but told him to keep quiet about the incident so as “not to alarm others in the area.” I asked my acquaintance if he would relay a message to this rancher through his friend and ask if he would be willing to speak to me, even if it had to be off the record. Needless to say, I have never heard anything back.

As far as I can tell, there is no truth to the rumors that wildlife officials are releasing, or contracting anyone else to release, large predators in Texas. I think the myth has gained steam due to the explosion of the feral hog population in the state. Certainly, this hog problem is real and nothing the state has tried to do to curb the population growth has worked. On the surface, the idea of reestablishing native predators to help with the problem seems plausible, as the state/feds would be killing two birds with one stone. Native species, all but extirpated in the state, would once again be living free in Texas and would be helping to eliminate the hog problem. The problem is there is simply no evidence suggesting such a program does, or ever did, exist. All the stories seem to originate from a “friend of a friend” or some other second, third or fourth hand source. I have never been able to track down anyone who claimed they had directly interacted or spoken with any government personnel about the release of predators or reparations for lost livestock. In addition, the story has spread to other parts of the country. Following is a post I located on the Lake-Link Hunting Forum. The post sounds pretty familiar.

A friend of mine lives in Southern Marquette county and his wife recently saw a cougar while out on a walk...the cougar was in plain sight and was casually walking in the yard of rural neighbors.... upon reviewing this my friend discovered a few things....that a local farmer had recently reported seeing two cougars within 5 miles of this cougar....then a week ago he ran into a firefighter friend wh0 told him and even more interesting story....basically a person that he knew was going out near some property he has up near Westfield and came across several DNR vehicles in his field...when he approached they told him he had to leave the area immediately even though it was his property...two of the trucks had large cages in the back and one contained a cougar...he left the area went down the road and waited and when those trucks drove past there was no cougar....I know this story is third if not fourth hand so I do not know how much is true but I know the people who have seen the other cougars in the field and I believe them...how they got there who knows...wanderers or released.....but does the DNR have the right to release such animals without public input...I know they have released Wolves in Portage county to help control the deer herd...obviously if they are releasing cougars that could be their only reason....but this animal is totally different than a wolf...while it does not multiply as rapidly as wolves it will stalk a human in the field or a child in a yard....I just thing it should have some public input...what da ya think?

Like most urban legends, there is just enough real information wrapped up in the tale to make it at least somewhat believable. Mix in a healthy dose of distrust for the government, which is not uncommon in our country these days, and you have the makings of a great conspiracy theory, an almost gift wrapped and ready made urban legend.