I am very pleased to be writing this post. In one way, all I’m doing is presenting a map to you that details alleged sightings of large, black, long-tailed cats. In another way, this map represents more than six years of work and documentation. I started the Texas Cryptid Hunter blog in December of 2008. Almost from the beginning, I have been taking reports from people claiming to have seen an animal that mainstream science says does not exist, yet has lived in the mythology of Texas and the deep south for well over a century.

During the last six years and change, I have collected exactly 202 reports from witnesses claiming to have seen what is commonly referred to as a black panther. As long time readers of this site know, there is no such animal. The black panthers of the movies and that are seen on television are either melanistic leopards, which are native to Africa and Asia or melanistic jaguars, long thought to have been extirpated from all but the southernmost regions of the North American continent. Cougars, wildlife experts tell us, do not exhibit melanism and it is true that not a single documented case of a black cougar has ever been documented. Still, the sightings persist, they won’t go away and they show no signs of slowing down. I want to know what people are seeing and I resolved to do my best to get to the bottom of this mystery. This distribution map is part of that process. 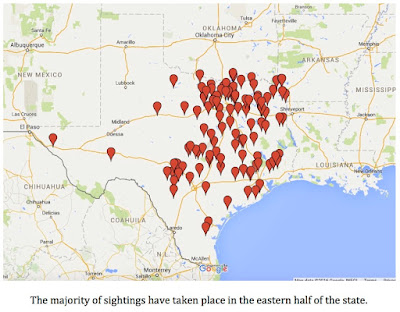 I have tried my best to place only the most credible of sightings on my map. Of the 202 sightings in my archives, only 112 made it on to the map. I had some doubts about some reports, felt misidentification was likely in others and just flat out had a bad feeling about a few. The 112 reports on the map represent reports from people I feel were being honest with me and were of sightings of no known cat or, possibly, of a large species of cat far outside of its accepted home range. Is it possible that I kept some valid reports off the map? Yes, it is. Is it possible that some of the reports that made the map were from liars or hoaxers? Again, yes; however, I truly feel that the map represents sightings of real animals. I think once the distribution is examined, it will speak to that. For example, the sightings are mostly confined to the eastern half of the state. This is the part of Texas that receives the most rainfall, where the major rivers of the state converge and is the most heavily wooded. This sounds like what a distribution map of a real animal would look like, in my opinion. 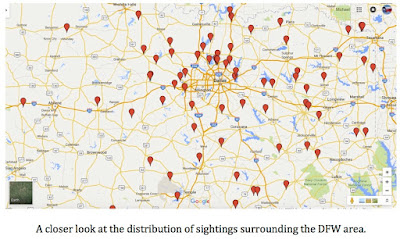 I have provided several screenshots of the map here for your inspection. I have zoomed in on several major areas of the state and also provided a look at the entire state. You can access the online/interactive version of the map by clicking here. Hit the link and it will take you to the map. Once there, you can click on each pin that marks a sighting and a short synopsis of the sighting will pop up. I really like this feature and hope you will spend some time clicking on these sighting locations to see what people are seeing out there. I invite any of you out there to study the map and see if you can discern any patterns. Who knows? Maybe together we can figure this whole thing out. 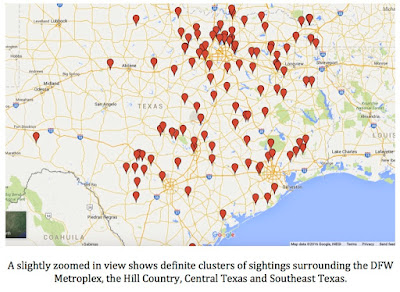 To the best of my knowledge, nobody else is tracking these sightings. I would ask that you all spread the word and let anyone who has seen one of these phantom cats know where they can report their sighting. In addition, I am looking for someone who has had repeated sightings on their property who would consider allowing me to place game cameras on site in an attempt to capture a photo of one of these animals. One good photo might just be enough for us to figure out what we are dealing with in regard to these enigmatic felids. Are jaguars making a comeback? Do cougars occasionally exhibit melanism? Do jaguarundis roam far farther north and get far larger than anyone suspects? Is there a new species out there just waiting to be discovered? If you are interested in allowing me to place cameras on your property, please contact me at texascryptidhunter@yahoo.com. That would also be the email address to contact me with a sighting.

I look forward to hearing from you soon.