Why Didn't I Shoot?

I apologize for being absent for so long. As I mentioned on the Facebook page a little over a week ago, I had to have some minor surgery. The procedure was supposed to be pretty simple and take only 45 minutes to an hour to complete. Things turned out to be more complicated than the doctors anticipated, however, and the procedure that was supposed to take less than an hour turned into 4 hours on the table for me. Naturally, this lengthened the planned recovery time as well. I am now pretty much back to normal and will be trying to get back into the swing of things. This post, while not the topic I had intended for my first article back, is an attempt to do that.

Recently, I was interviewed by Jim Harold for his Paranormal Podcast program. You can download/stream the interview here. During the course of the interview, Jim asked me about the visual I had of what I believe to have been a wood ape in the Sam Houston National Forest in May of 2005 (you can read my account of this sighting here). During this portion of the interview, I mentioned several reasons why I felt it was highly unlikely what I witnessed was a person perpetrating a hoax. Toward the end of my relating of the account, I mentioned, somewhat in jest, that one of the reasons I believe a hoax to have been unlikely was that, “This is Texas. Everybody has a gun. This guy would have been taking his life in his hands running around in an ape suit” (paraphrase). I say “somewhat in jest” because, obviously, not every Texan owns a gun and of those that do, not everyone carries one everywhere they go. The comment was an attempt to inject a bit of levity into the interview while still making a valid point. That point being, while not every Texan carries a gun, a LOT of them do, making a hoax along these lines a very dangerous undertaking.

I received a comment from someone called “Bobodean” regarding the interview and that comment in particular. His (I am assuming the commenter is a male) comment is below:

“Regarding your siting (sic)... if everyone in Texas carries a gun...why didnt (sic) you shoot?”

I cannot be sure whether this commenter is asking a serious question or if he is taking a dig of some kind at me. I suspect it is the latter. Even if that is the case, at the heart of the comment lays a legitimate question, actually more than one. Was I carrying a gun that night as I claim so many Texans do? If so, why did I not attempt to collect the specimen I feel is necessary in order to prove the existence of the wood ape/sasquatch? These questions are fair enough so, here goes. 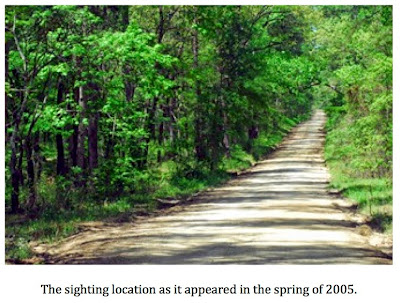 Was I carrying a gun that night? Yes, I was. I hold a CHL (concealed handgun license) here in the state of Texas and was legally carrying a sidearm that night. According to the latest data I could find, and I am very open to being corrected if there is more current data out there, there are in excess of 500,000 CHL holders in Texas. While this is a significant number, many might find it surprisingly low for a state with a population of approximately 26,528,398 as of 2013. Part of the reason more Texans do not obtain a CHL is that it is legal to carry a firearm in your vehicle here without a license. One only needs a CHL if they wish to carry a concealed weapon after they leave their vehicle. How many unlicensed Texans carry a weapon in their vehicle? Your guess is as good as mine on that, but I will say that the number increases every day. I also think it is safe to assume more Texans living in rural areas carry a weapon in their vehicle than those living in urban areas. So, you see, while I was attempting to bring a bit of levity to the interview when I mentioned the risk any would be hoaxers would be taking by donning an ape suit and traipsing about a lonely forest service road in rural Texas, the point is valid. A lot of Texans, including me, carry a weapon on their person or in their vehicle. To attempt to perpetrate such a hoax is almost suicidal in nature. I was not being hypocritical, as “Bobodean” seems to be implying, by making the statement I did. I was carrying that night. I know many, many other fellow Texans do the same on a daily basis and anyone attempting to perpetrate some kind of bigfoot hoax in this part of the world is taking a huge risk because of it.

Fine, you may think. Point taken. It still does not explain why you did not shoot that night. That is true enough. So, why did I not take the shot?

There are many reasons.

The sighting was fleeting. As detailed in my report, I was sitting in the front passenger seat looking out to the right of the vehicle when my friend brought the car to a stop and asked, “What is that?” I turned, leaned forward to get a better look and watched the subject turn and walk from the road into the woods to our left. The entire incident lasted only a few seconds. There is simply no way I could have unstrapped my seat belt, exited the vehicle, drawn my weapon and fired before the subject disappeared into the forest.

Having said that, and I feel this is very important, I would not have done so even if there had been more time. The first rule taught in any hunting safety course is that you must absolutely, positively identify your target before drawing a bead and pulling the trigger. You get no “do overs” once you take a shot. You have to be sure.
I was not sure what I was looking at that night, not initially. Even though I was out looking and hoping for this exact scenario, it took several seconds for my mind to work out exactly what was standing in that road. By the time I realized what I was likely seeing, it was gone. It is only in hindsight that I have become absolutely convinced what I saw that night was a living, breathing wood ape and not a man in a costume of some kind. Re-enactments, comparative measurements, etc. confirm that what I thought was “man-sized” was actually much larger. I did not have the luxury of all that data that night in 2005. I had only a few fleeting seconds in which to decide what to do. As has been established, I would not have had the time to fire a shot anyway but, even if I had been walking down that road, instead of riding shotgun in a vehicle, and able to draw my weapon quickly, I would still not have taken the shot. I simply could not be sure of what was in front of me in that moment. I do not feel this diminishes the truth behind my statement about a hoaxer taking his life in his hands by pulling a stunt along these lines, however, as there are a lot of folks out there who are less disciplined when it comes to what they are willing to shoot at and under what circumstances.

There are other reasons. I am sure most of you have read accounts where hunters claiming to have had a wood ape in their sights did not pull the trigger because they felt they “didn’t have enough gun.” I certainly fell into that category that night. I was carrying a 9mm semi-automatic handgun that is meant more for self-defense “fight in a phone booth” situations than for taking down big game at 40 yards. I could go on but I am sure you get the idea by now.

Again, while I get the feeling that “Bobodean” was taking a dig at me, he did touch on an aspect of my sighting that I have never explained in detail before. I think this post should serve to explain why I made the statement I did in the interview with Jim Harold and why, despite being armed that night, I did not take the shot.

Any more questions?
Posted by Mike at 9:42 PM