I received an email last week from a reader in Bremond, Texas detailing experiences with a mountain lion there over the last several days. The lady who wrote the email described losing multiple chickens to the predator. She also claimed to have had a pig injured by the cat. Her email is below. Please note, I have redacted the reader’s last name. I do not know if she would want that revealed. I can tell you that the last name was provided in the original email. 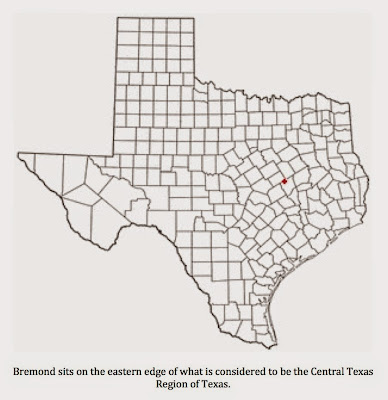 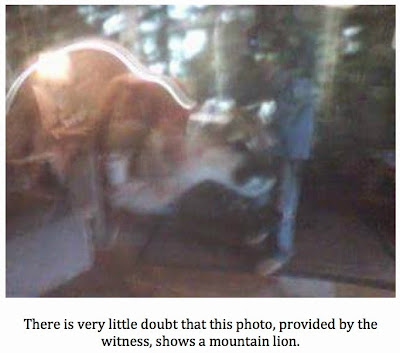 I get a lot of emails along these lines. Most of the time, the readers who are reporting the incidents never see the predator responsible and can only speculate as to what the culprit might have been. This time is different. Bridget provided not only photos of tracks, but a shot of the cat itself as it sat on her porch. There is no doubt that the cat in the photo is a cougar.

I have replied to Bridget asking for some additional information and permission to visit the property, as it is not far from where I live. I have yet to hear back from her. I have been holding the photo for about a week in the hopes that I would have some more details on the incident but decided to move forward, rather than waiting any longer. I still hope to hear back from Bridget and get some additional details. 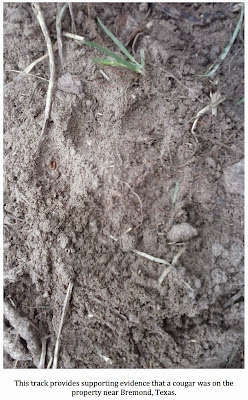 Critics will, no doubt, consider the fact that this reader has yet to respond to my queries as a sign something fishy is going on with this report. Certainly, that is possible; however, I feel like this report is likely genuine. The email I received was a matter of fact run down of what happened with no embellishment. Generally, this is a good sign. Could this be a hoax? I suppose so. I really do not get that feeling, however. 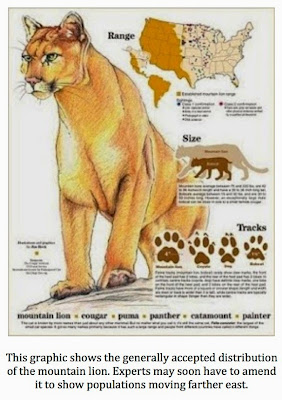 Bremond is located in central Texas and is considered to be outside of the normally accepted range of mountain lions in the Lone Star State. According to the Texas Parks & Wildlife, “The Mountain Lion is found throughout the Trans-Pecos, as well as the brushlands of south Texas and portions of the Hill Country.” TPWD does concede, however that, “Sighting and kill reports indicate that mountain lions now occur in more counties than they did 10 years ago and appear to be expanding their range into central Texas.” My experiences, along with the many anecdotal reports I have received would seem to confirm this last statement.

As stated above, I do hope to hear back from Bridget and, possibly, visit the property. Whether that happens or not, mountain lions seem to be making a nice comeback in Texas and are beginning to refill a niche that has long been vacant in most of the Lone Star State. As they do so, there are bound to be some clashes between these predators and rural property owners. Hopefully, lions and people will be able to learn to coexist. I would hate to lose these majestic cats again from all but the westernmost and southernmost parts of Texas.

If that occurs, these magnificent cats might not get another chance.