Ode to a Dog

Yesterday, I buried my dog.

Maggie came to us almost twelve years ago. She was not the type of dog many of you might picture me owning. She was not a Labrador Retriever or a bulldog. She was not a bird dog or any other kind of hunting dog. Neither was she a “manly” breed like a Pit Bull, Doberman Pinscher, German Shepherd or Rottweiler. Maggie was a Westie, a West Highlands White Terrier, to be specific.

Why a Westie? Simply, because that is what my little girl wanted. My daughter, 8 years old at the time, had seen a Westie on a dog food commercial and fell in love with the breed. When we finally decided that she was old enough to help take care of a dog, she made it abundantly clear that she wanted a Westie . My youngest daughter was only 3 at the time and just wanted a “puppy dog.” The breed didn’t seem to matter much to her. That being the case, it was settled. A Westie it would be. 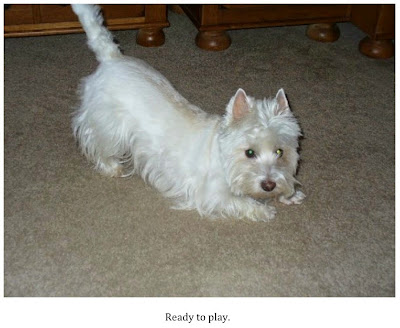 I looked around a bit and found a lady that bred Westies in Kempner, only 30 minutes or so from our house. She had a litter of puppies that were almost ready to leave their mother and said we could come pick one out. We loaded up the girls and headed out to Kempner to inspect the litter. My oldest daughter had a broken foot at the time and was in a hard cast and had a difficult time getting up the porch steps of the house while on her crutches. Once inside, she sat down and looked at the white mass of squirming, running and playing baby Westies with a huge snaggle-toothed grin on her face. I had done my homework on the breed and was carefully picking up and inspecting each pup. If I was going to shell out the amount of money this lady wanted for a puppy, I was going to be sure I had the best one out of the litter. As I was inspecting the strongest and healthiest-looking puppies a tiny and timid pup, no doubt the runt of the litter, belly crawled out from between a cabinet and a chair toward my oldest daughter. The pup gave my daughter’s exposed toes (sticking out of the cast) a quick lick. My girl picked up this tiny, timid female and our fate was sealed. It turns out we did not pick out a puppy that day, the puppy picked us.

It was settled that this would be our Maggie. It would be another month before she was weaned and ready to come home with us (Try explaining that whole concept to a 3 year old that wants her puppy dog “right now”). The month came and went quickly, however, and we retrieved Maggie. She had grown quite a bit, but was still small for a Westie. That was ok with us, though. She seemed at home right away. There was no whining or crying at night or any other signs of her being homesick. She was home and she seemed to know it.

I could tell you many funny stories about our Maggie. She made us laugh and was a constant source of joy for us. She never failed to greet each and every family member with unbridled enthusiasm, jumping and hopping up and down until she received the attention she sought. Maggie loved belly rubs and would flop over on her back anytime her name was called hoping you would indulge her. We used to joke that she was part turtle as she often had trouble flipping back over after one of these belly rubs. She also loved to play. I have never known a dog that loved to play as much as Maggie did. The game really didn’t matter much to her. She would chase a ball all day, play tug-of-war with almost any object or just wrestle with your hand. She loved it all and kept her puppy-like enthusiasm for almost all of her years. 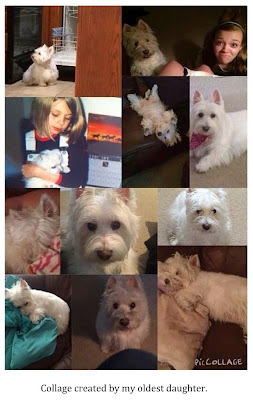 Recently, Maggie really slowed down. At first, we thought age had simply started to catch up to her. In a way, I suppose, it had. Three days ago, Maggie was diagnosed with a severe liver disorder. The veterinarian prescribed some meds but warned us that her prognosis was not good. We gave her the meds and she seemed to perk up almost immediately. We were encouraged as she ate better that night than she had in days and drank water without being coaxed to do so. Maggie retreated to her beloved crate that night to sleep, acting like she felt better than she had in a long time. When we woke up yesterday morning, however, things had changed. Maggie seemed to have lost 5 lbs. overnight. Her eyes were bloodshot and red and she could not seem to close her mouth. The change in her from the night before was stunning. I loaded her up and returned to the vet immediately. I was waiting at the door, holding her, when they opened at 7:30. The vet began working on her immediately but I knew that this was it. Maggie was a loving dog but had no problem letting you know she did not like being poked, prodded or stuck with a needle. She was a terrier, after all. As the doctor worked on her she completely surrendered. There was no fight left in her. She looked at me with very sick eyes and I knew it was time to let her go. The vet agreed and within minutes, she was gone.

The vet asked what I wanted to do with her body and without hesitation I managed to choke out, “I want to take her home.” So, I did. I was thankful that no one was home as I dug her grave in the backyard. This big tough coach/cryptid hunter was anything but during that time. I wrapped Maggie in her favorite blanket and laid her in a small box with her favorite toy. I then placed the box in the deeper than it needed to be hole (I think I kept digging because I knew what I would have to do when I was finished). Putting that first shovel of dirt on top of that box was hard. I knew it would be but… it was much tougher than I ever would have imagined. Once the grave was covered, I retrieved some bricks, left over from the building of our house more than ten years ago, and laid them in a rectangular pattern on top of the grave. These bricks would allow us to always know exactly where our Maggie was laid to rest. I knew I would likely have to redo this once the dirt settled but I did not want my girls to see only a mound of recently disturbed dirt when they came home. I wanted it to be as nice as possible.

My wife cried all day. My oldest daughter, now 20 and away at college, was devastated. My youngest daughter, now 15 and unable to remember a time when Maggie was not in her life, was inconsolable. Maggie was the dog of their childhood. The dog that slept at the foot of their bed when they were sick, the dog they slipped food to under the table and the dog that they played with for countless hours both inside and out. Maggie is the dog they will always remember. Even so, Maggie really turned into my dog as the years passed. Mine was the lap she sought out at night, mine was the side of the bed she came to in the morning when she knew she would be allowed to nap for that last hour on the bed between my wife and I and it was me she stood in the window watching for in the evening. I will miss that little white face with the jackrabbit ears in the window when I come home at night.

I know there is much in the world that is more tragic than the loss of a pet but to trivialize such an event is a mistake. Loss is loss and a good dog is worth its weight in gold. Maggie was a good dog and she was mine.

I will miss her.