Has a black panther been photographed in the American South?

I found the image included in this post on a hunting forum. According to what I read there, the photo was taken via game camera somewhere in the woods of Alabama. The gentleman who posted the photo felt it was proof that “black panthers,” a colloquial term used to describe any and all long-tailed black cats, were real. Mainstream science, as has been mentioned here countless times over the years, denies the existence of these legendary mystery cats.

According to wildlife officials, the only New World big cat that exhibits melanism is the jaguar (Panthera onca). While the historic range of the jaguar once included much of the American Southwest and South, these big cats are thought to be almost completely extirpated from North America. Jaguars are recognized to live in South America, Central America and Mexico with a few stragglers occasionally venturing across the border into the Southwest United States (Arizona and New Mexico). This being the case, along with the fact that there has never been a documented instance of a melanistic mountain lion (Felis concolor), would seem to shut the door on the existence of the legendary black panther. Yet, people continue to report sightings and even capture intriguing photographic evidence like the image accompanying this post. 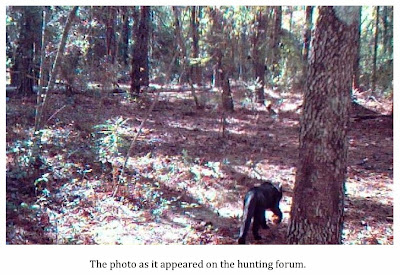 Some supporters feel the jaguarundi (Puma yagouaroundi) is a candidate for the black panthers so often reported. The jaguarundi is a small, wild cat native to Central and South America. The habitat of this species is thought to extend into Mexico with most individuals located in the Yucatan Peninsula or along the Pacific and/or Gulf Coasts. The jaguarundi has been known to slip across the Rio Grande and up into Texas but keeps to the extreme southern portion of the Lone Star State where it is extremely rare. According to the Mammals of Texas – Online Edition, the jaguarundi has only been officially documented in Cameron, Hidalgo, Starr and Willacy counties. Many, many Texans would disagree with this and feel this small wild cat’s range extends up through the Hill Country and up along the Gulf Coast as far north as Jefferson County. The problem with the jaguarundi as the suspect behind black panther sightings is the small size and distinctive appearance of this cat. While the jaguarundi does go through a black/charcoal phase, the overall description given by most black panther witnesses would seem to eliminate this animal as the mystery cat in question.

Now, back to the photo.

The subject is quite obviously a cat of some kind. I do not think anyone would dispute that. Too, at least from the perspective we have, it would appear to be larger than what would normally be seen in a feral/domestic. The length of the subject is more impressive to my eye than the height. Also, the cat in the photo is very thick through the chest and mid-section. Most ferals do not appear this hardy. The characteristic long tail, with thick rounded tip that is so often reported by people claiming to have seen black panthers, is clearly visible. I think it is also quite clear that this animal is black. It is not a trick of light or a case where the animal is in shadow giving the illusion of melanism. From what I can tell, and I will be the first to admit that I am no expert, the photo appears genuine. In addition, the forest in which this photo was taken looks like southern woods. The terrain looks very much like the forested areas that run from east Texas eastward across the south. The picture certainly looks like it could have been taken in the woods of Alabama. All of these factors being what they are, I can say it is one of the more intriguing alleged black panther photos I have seen in some time. 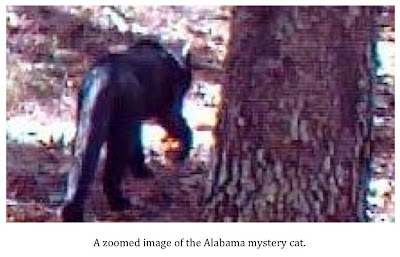 Having said that, there are still some problems with the photo, first and foremost among them being the who, when and where behind the image. Who took it? The gentleman on the forum went by a user name that was obviously not his given name. When was the photo taken? Where exactly? My requests for more information have remained unanswered. Also, some of the common earmarks almost always seen on photos taken by trail cameras are missing. It is rare, indeed, to see a photo taken by a game camera that does not have a date and time stamp on it. Most cameras these days also feature a temperature stamp and their company logo as well. These hallmarks are missing here which leads me to believe that the photo was edited in some way. It is possible the image was simply cropped a bit to exclude this data. This would make sense if the owner’s name appeared on the image as it often does on many models. If that is all there is to it, then the cropping is understandable; however, the possibility that there is some sort of agenda of a more nefarious nature behind the cropping must at least be considered at this time.

Another problem with the photo is scale (doesn’t that always seem to be the case?). The cat in the photo certainly looks to be larger than a domestic/feral but we know nothing about how high the camera was mounted, the angle at which it was set, etc. These are factors that can truly affect what we are seeing. For example, the tree to the right of the cat appears to be pretty large in diameter in the photo. The impression one gets is that the cat is walking right by it. That is not quite the case, though. The tree to the right is actually in the foreground and closer to the camera than the cat. If the cat were right next to the tree then we would be seeing where the tree meets the ground. We cannot see that in this picture, therefore, the tree must be in the foreground. The subject has already walked by the tree and is now well past it. How far past? It is hard to say. If the cat is just a step or two past the tree then it would seem the animal is pretty big. If the cat is five or six feet past the tree, then maybe it is not that large at all. That being the case, we cannot really make a definitive call on the size of the animal.

So, once again, we have a photo that is intriguing but inconclusive. It is too bad that the cat is walking away from the camera (again, doesn’t that always seem to be the case?). Otherwise, we might be able to make a judgment on what we are seeing. A jaguar has a massive head, for example, and is very different structurally from a mountain lion. A jaguarundi has a very distinctive head shape as well and would be pretty easy to identify. I will say that I do not feel we are looking at a jaguarundi. The cat in this photo is thickly built and is simply not put together like a jaguarundi, which is a very slender and has an almost weasel-like appearance. I think there are only two real possibilities as to the identity of the cat in this photo. It could be a large feral/domestic that is very robust and is being made to look larger than it really is due to a trick of perspective or…

… it could be the animal that we have all been seeking.

*If there is anyone out there that knows the story behind this photo, please contact me at Texascryptidhunter@yahoo.com.
Posted by Mike at 1:49 PM