The red wolf (Canis rufus) once roamed a large part of the southeastern part of North America. The range of the red wolf once stretched from the Atlantic and Gulf Coasts northward into Indiana and the Ohio River Valley. This long-legged canid also inhabited areas stretching from central Pennsylvania to Missouri and central Texas. The red wolf was an apex predator that could successfully make a living in forests, swamps or prairies. Now, however, it is all but gone. Most scientists feel the species went extinct in the wild in the early 1980’s. The last red wolves known to have lived in Texas were documented by John Paradiso. He noted that seven specimens taken from Chambers County near Anahuac between 1963 and 1964 and one specimen taken from Kennedy County near Armstrong in 1961 were full-blooded red wolves. Subsequent specimens taken from the eastern portion of the Lone Star State have all been found to be large coyotes. 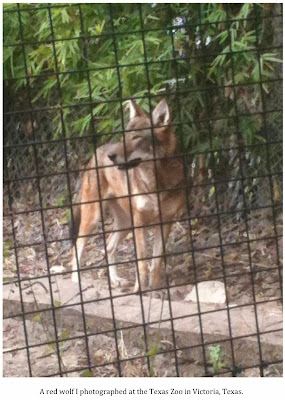 Debate has raged among biologists as to whether the red wolf went extinct in the traditional sense. What I mean by that is that many believe, as their numbers dwindled, red wolves interbred with coyotes (Canis latrans). This continued long enough that full-blooded wolves disappeared, leaving only a sort of coyote/wolf mutt here in Texas. It has been documented that many, if not most, coyotes in Texas carry at least some red wolf genetics. This confirms that this interbreeding took place and took place often. Some scientists feel that the red wolf was nothing but a hybrid in the first place, albeit a fertile one that was able to reproduce; the offspring of coyotes and gray wolves. The taxonomy of the red wolf is a topic for another post and I do not want to get bogged down in that right now. The important thing to note here is that due to a combination of hunting, aggressive predator control practices, habitat destruction and increasingly extensive hybridization with coyotes, the red wolf has disappeared forever from Texas.

Reports continue to filter in from rural Texas of wolves stalking the woods, creeks, swamps and prairies. These witnesses will stress to you that they are wolves and not coyotes. A lot of these folks will tell you that they have popped many a coyote while protecting their stock and know the difference between what they have taken in the past and a wolf. Wildlife biologists disagree and say these predators have been extirpated. After all, they say, if they were still here there would be photos of them. Case closed.

There are some pretty interesting photos out there that seem to indicate that the red wolf might not be completely gone after all. I will explore three different sets of photos in this post. One set, in my opinion, is likely a coy dog, the identity of the canid in one photo is debatable and, finally, one set of photos seems to clearly show a red wolf-like animal. 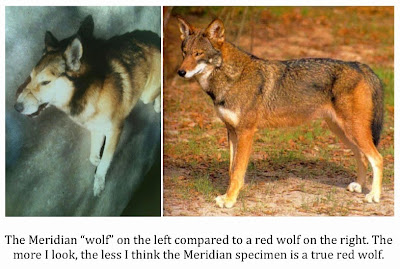 I recently obtained a couple of photos, that came from a gentleman living near Meridian, of a dead canid that he feels is a red wolf. As you can see in the photo below, the animal has some wolf-like characteristics. In my opinion, however, this is likely some sort of shepherd mix or possibly a coy dog (coyote/domestic hybrid). The animal does have pointed ears but they appear narrower than what I would expect to see in a red wolf. The muzzle is larger than that of a coyote but more rounded in appearance than I would expect in a red wolf. Certainly, the Meridian specimen appears thick in the neck and through the chest like a wolf but the coloring is more like that of a German shepherd. I admit that the eyes of the specimen have the narrow appearance that would be expected in a wolf but it must be kept in mind that could be because we are looking at a dead animal. The animal appears quite large, and I have been assured that the Meridian specimen stretched from the hunter’s shoulders to the ground when held up by the back legs but have no hard evidence to back that up. There is nothing in the photos I received that shows scale. That being the case, the best I can say is that the photos are inconclusive and should not be used as evidence that red wolves still roam the Lone Star State. 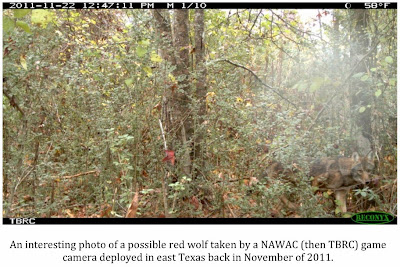 A few years ago, a NAWAC game camera captured a photo of a canid that was the subject of much discussion among group members. The animal in question appeared to be larger than a typical coyote and had many of the hallmarks of a red wolf or, at the very least, a red wolf hybrid. The coloring on the NAWAC specimen is certainly dead on as compared to most typically colored red wolves. Too, the ears are large and the snout is of the correct shape. The animal is thick in the chest and, as the comparison photo shows, is almost interchangeable in size and coloration with that of a red wolf. There are arguments against this being a red wolf, too. The coloration is a good match but the problem is that many coyotes exhibit almost identical coats. The ears are large but are more rounded than I would expect to see on a true wolf. I think the comparison photo illustrates this point quite well. In addition, the eyes of the NAWAC specimen look more rounded and coyote-like than the more narrow eyes usually associated with a full-blooded wolf. One of our members, who has an extensive background in all things wildlife-related, showed the photo to three wildlife biologists. Two of these scientists felt that, at the very least, this animal had red wolf genetics in him and was likely a hybrid. The third, towing the company line, said it was a coyote. When asked how he could be so sure, the biologist responded, “because there are no red wolves in Texas,” (I’ll leave that statement alone for the time being). Scale is also a problem here. It is impossible to say just how large the canid in the NAWAC photo actually is as there is nothing in the picture to provide obvious scale. It appears tall and long-legged but the photo is far from definitive. Measurements could have been taken of the tree behind the specimen but, as it was another cryptid we were attempting to photograph at the time, this was not done. My personal opinion on this animal is that it clearly has some red wolf in it. Whether it is a true hybrid (the first generation offspring of a coyote-red wolf coupling) or a descendent of a hybrid (more likely) I cannot say. 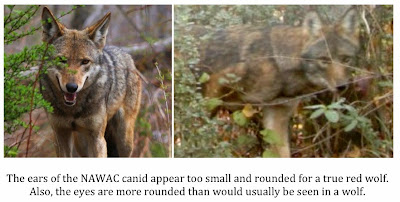 The third set of photos I want to take a look at were graciously provided by Chester Moore, Jr. and are featured on his Kingdom Zoo website (www.thekingdomzoo.com). The photos were captured via game camera by Mr. Moore’s research partner, Terri Werner, in 2012. The two pictures featured here are stills from two separate videos taken at the same location. I think most would agree that the animal seen in these photos is anything but a common coyote. The coloration, thick body, long legs and large ears immediately caused me to think “wolf.” 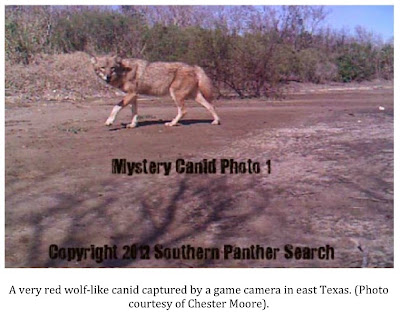 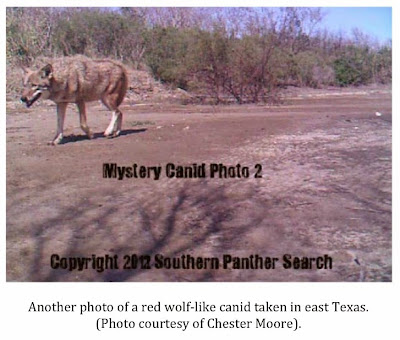 Mr. Moore also has a very interesting video of a red wolf-like canid on his website that is worth the time to view. The video subject is not built like a coyote; it is taller and longer-legged. While the video is black and white, the stark white of the subject’s chin, neck and chest is obvious. This pattern is exactly what one would expect to see when viewing a red wolf. Obviously, I cannot definitively say that the canids captured on video by Moore and Werner are full-blooded red wolves. What I can say is that whatever their genetic make-up might turn out to be, these canids are likely the closest thing to true red wolves I have seen in the wild and, if nothing else, their existence should prove the need for all of us to keep an open mind when it comes to entertaining the idea that these magnificent animals might once again roam parts of the Lone Star State…

… if they ever left at all.

*A special thanks to Chester Moore, Jr. for allowing me to use the photos above in this post. Please check out Mr. Moore’s Kingdom Zoo website and consider supporting his Children’s Kingdom Ministry.
Posted by Mike at 4:12 PM

Email ThisBlogThis!Share to TwitterShare to FacebookShare to Pinterest
Labels: Coyotes/Wolves, Out Of Place Animals, Texas Cryptids