Cougars in the Metroplex

I was contacted by a good friend and fellow NAWAC member today regarding a big cat sighting in Collin County, Texas. The story is short and sweet but very interesting.

My friend was visiting a Metroplex Cabela’s store when he overheard a man discussing a cougar sighting in Murphy, Texas this past week. Murphy is just east of Plano, a large Dallas suburb, and completely urban. To say my friend, a native of Plano, was surprised would be an understatement.

My friend approached the man, told him he could not help but overhear the cougar story, and asked him if it was possible he had mistaken a bobcat for a cougar. This has happened on multiple occasions in the Dallas-Fort Worth area of late. One local news station did a story on a mountain lion loose in the area and even broadcast photographic “proof” in the form of a video. The problem was the video clearly showed a bobcat.

It turns out this was no bobcat. 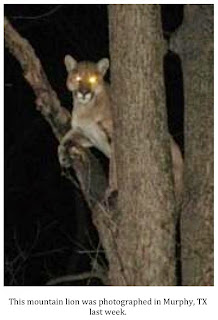 To his credit, this gentleman did not get offended by being questioned by a stranger. Instead, he got out his phone and showed my friend a photo he had taken of the big cat. As you can see, this is clearly a mountain lion.

This sighting comes on the heels of another legitimate mountain lion sighting in the area. Back in June, a cougar was seen near Lantana, Texas, a bedroom community just south of Denton. Lantana is roughly 40 miles northwest of Murphy. There is no obvious connection between the two towns. There is no creek or river running through or near both cities that might provide a travel route for a big cat. There is, however, a railroad track that runs through Copper Canyon, just northeast of Lantana, to the southeast. The tracks run in a southeasterly direction, skirting the southern end of Lake Lewisville, and into the outskirts of Plano. There, a railroad intersection is located and another set of tracks runs eastward directly through Murphy. Could this cat be using the railroad tracks as a travel route? 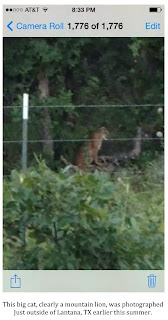 It is no secret that wildlife will use manmade right of ways as travel routes. Power line cuts, pipeline senderos, improved hiking trails and old fire and logging roads are all used by wildlife to travel. The reason is simple. Calories are hard to come by in the wild and burning them indiscriminately is not an option. That being the case, wildlife will follow the path of least resistance whenever possible. Railroad tracks are no exception. Like the other aforementioned routes, railroad tracks often run for miles in sparsely populated areas and are, more often than not, paralleled by thick brush on both sides. It is true these tracks eventually run into urban centers but, even then, railroad yards and routes often are found on the outskirts of town or in largely commercial areas where, once night falls, traveling unseen would not be too difficult.

I don’t know if the mountain lion seen in Lantana is the same cat that was spotted in Murphy. It is impossible to say for sure but I don’t think it is impossible. Either way, the suburbs of the Metroplex, the Plano area in particular, remain a hotbed for big cat sightings. Both tawny-colored cougars and large black cats, most often described by witnesses as black panthers, are being seen on a regular basis. While surprising to most, this phenomenon fits a pet theory of mine that mountain lions, like coyotes, have figured out how to live in close proximity to people. Certainly, bobcats are seen all the time in urban areas. If they can figure it out, why would it be impossible for their cougar cousins to do so? Certainly, an urban setting is not ideal habitat for a big cat such as a mountain lion. Man, however, continues to encroach upon the habitat of these predators and survival may dictate that they pass through and spend time in such urban areas at least occasionally. What is indisputable is that mountain lion numbers are increasing and they are beginning to show up in parts of their historical range that have not seen these magnificent cats for a century or more.

Keep your eyes open, folks, and your cameras handy. Even if you live in an urban area, Mother Nature may have a surprise for you.