I got a reminder about the power of the media this past week. A good friend of mine who lives in SE Texas called me and said that he had been contacted by an acquaintance about a “chupacabras” roaming around near an abandoned house on the Trinity River. The creature was allegedly the size of a large coyote and was wandering about and appearing on the porches of homes up and down the river looking for food. It had been spotted eating out of dog bowls on multiple occasions and the locals were worried it would end up hurting someone or one of their pets. When my friend asked this caller to describe the animal they were seeing he got the classic description of the “new chupacabras” popularized by the media: a hairless, blue-gray skinned canid of some sort. I use the term “new chupacabras” due to the fact that these hairless, mangy canids, or blue dogs as many in Texas are now calling them, do not resemble the original descriptions of the chupacabras in any way. 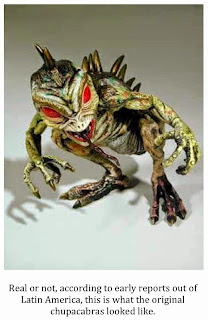 The chupacabras legend originated in Latin America, specifically in Puerto Rico. Also called the goat sucker, the chupacabras allegedly attacks small domestic animals like chickens, goats and sheep. It is said that it kills by making two vampire-like puncture wounds on its victim through which it drains their blood. Usually, no other marks are present on the body of the unfortunate victim. Immigration has brought the legend of the chupacabras to America and news outlets have jumped at the chance to label any mystery creature or odd-looking animal as a chupacabras. The most annoying aspect of this is that these outlets are latching on to the legend in name only. They are completely ignoring how the chupacabras was originally described. According to early reports out of Puerto Rico, the chupacabras was an upright, alien-looking creature with large glowing eyes, spikes protruding off its back and large claws. The “new chupacabras” look nothing like this; however, that fact has not stopped news outlets and magazine shows from labeling every poor mangy coyote and fox seen roaming about as the dreaded chupacabras.

My friend, knowing full well what he was likely to find on the banks of the Trinity River was nothing more than a mangy dog of some sort, agreed to come out and have a look and make an attempt to rid the area of the creature. Whatever the animal was, he reasoned, if it was coming up on to porches and approaching homes it was likely sick. A sick animal near people, especially children, and pets is often a bad combination. My friend arrived at the home of the man who contacted him and was told he might need something more powerful than the shotgun he was carrying to dispatch the large creature. While my friend was confident he had more than enough firepower to handle whatever this animal might turn out to be, he was intrigued that this man had been so intimidated by the creature. 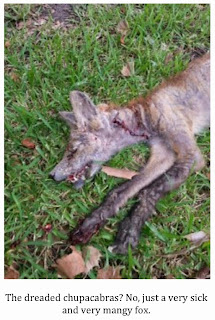 What followed was as predictable as the sun rising in the east. My friend located the “chupacabras” in the abandoned house on the bank of the river and dispatched it quickly and humanely. As he suspected, the dreaded chupacabras turned out to be nothing more than a very ill fox that was eaten up with a severe case of mange. The allegedly large, coyote-sized beast turned out to weigh between 15-20 lbs.

My friend called me after he had completed his task and we chuckled over the whole incident. The people living in the area had been completely spooked by the prospect of the dreaded goat-sucker roaming about wreaking havoc. The idea of the much feared chupacabras had been firmly implanted in their minds by local and national media. 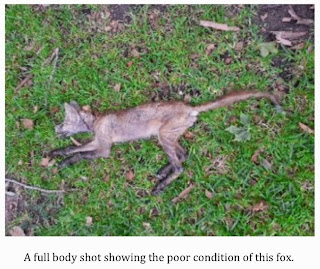 While there was never any chupacabras on the banks of the Trinity River, it is still a good thing that my friend was called out to investigate and dispatch the animal. Any time wild animals approach humans, it is a sign that animal might be sick. Sick animals can be desperate animals and desperation can lead to dangerous confrontations. In addition, many diseases, the different types of mange among them, can be spread from wild canids like foxes and coyotes to domestic dogs. Finally, this little fox was suffering badly. Judging by how emaciated he was, he would not have lasted too much longer. He was slowly starving to death. While it is sad any time an animal has to be put down, his suffering is now at an end.

One of my goals when I began this blog was to educate people on some of the more odd animal stories out there. I hope I am accomplishing that to some degree with this post. Simply, hairless, mange-ridden canids are not chupacabras. They never have been and never will be. News people are just exhibiting their ignorance on the topic by their continued insistence on labeling these sick creatures as cryptids or something paranormal.