What is it about swamps that strike such a primal chord in men? Is it the near impenetrable vegetation that obscures our view and potentially hides all manner of threats? Is it the slow moving black water of bayous and marshes that harbor all kinds of ill-tempered beasts from alligators to snapping turtles and that make travel all but impossible? The venomous snakes, perhaps? Too, there is the sense that one gets when making your way out of the swamp, almost as if the bog doesn’t want to let you go. Could that be it?

Or is it something else?

There’s a feeling one gets in the swamps, marshes and bottoms of Texas and the Deep South that is hard to define. Once surrounded by bogs, quicksand and dark woods, it becomes easy to imagine that you are setting foot in a place where no man has trod before. It is like visiting the land as it must have appeared eons before, a time when anything might have walked the swamp. Stand in that same swamp at night and the mind wonders if whatever walked the swamp in times past might not walk it still. It would seem in some locales that might be exactly the case. 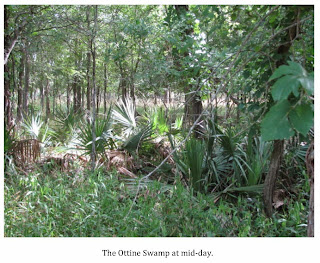 To many, the Ottine Swamp is but 198 acres of bog and thicket located almost exclusively within the confines of Palmetto State Park. It is much more than that, however, and is actually made up of some 10,000 acres that flank the San Marcos River between Luling and Gonzalez. There is an amazing diversity of plant life in this area ranging from hardwood bottoms, mesquite flats and true palmetto dominated swamplands. It is a spot out of place geographically and out of time chronologically where people have reported strange encounters with a hair-covered, bigfoot-like creature known locally as “the thing.”

One of the most famous accounts regarding the thing of Ottine Swamp was documented by historian William Syers in his book Ghost Stories of Texas (1981). Syers recounts the experiences of one Berthold Jackson in the book. Jackson was a longtime resident of the Gonzales area and had spent years stalking the creature by the time he was interviewed by Syers in 1980. Jackson is described as an expert woodsman, someone who would know all of the regular denizens of the swamp. He claimed to have had several run ins with the thing but had nothing substantive to show for it. He claimed to have heard it, however, and said, “I’ve heard it, nights. I’ve heard just about every animal’s cry; this one is somewhere between human and animal – like nothing you’ve ever heard in your life.” When asked what he did whenever he had heard the creature’s cry, Jackson said, “We went after it but it is black dark in there; it moved too fast. We heard it dead ahead, then all at once, a quarter mile north.” Jackson was continually frustrated and confused by his inability to get a look at the thing. “I’ve put a big light on it; so have others, more than once. Nothing!” he said. While a true visual eluded Berthold Jackson, he did feel like he had an idea as to the size of the beast and what it might be. He told Syers that he felt that the creature was well over a hundred pounds. “Yet,” he added, “we’ve doubled back and seen limbs stepped on and broke.” Jackson added, “It could weigh more – like an ape.” 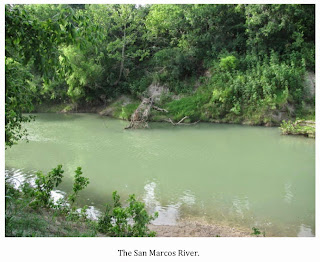 Berthold Jackson theorizing that the thing of Ottine Swamp might be an ape is interesting and might have been based on the visual descriptions of the beast given by others in the area. The thing has been described as covered in gray or black hair, ranging from four to eight feet tall, incredibly fast and, seemingly, possessing the ability to melt into the swamp almost instantaneously. This last fact could contribute to the mythology that has sprung up around the legend where it is said the beast can become invisible at will.

Jackson shared another well known, at least locally, incident that occurred in the early 1970’s involving local residents Brewster Short and Wayne Hodges, who were running dogs in the swamp one night (presumably, the pair were hunting raccoons). One of the dogs caught a scent and was off like a shot. The hunters trailed the dog for over two miles to the base of Lookout Hill, near Palmetto State Park. “They got one dog in,” Jackson recalled. “Wayne was in the back of the car holding his hound and Brewster was calling in the others. All at once, Wayne’s dog bristled all up and started howling and crying. When he did, something reared up on the back of the car. Wayne looked around and all he could see was big and gray.” The pair beat it out of the area as soon as possible, leaving the two dogs still in the swamp to fend for themselves. Jackson added the following, “Wayne’s plenty brave, always was, but when he got home, he moved into his mother and dad’s bedroom.”

The Lookout Hill area has remained a hotspot for encounters with the thing. Many an amorous couple has been run out of the area. Sometimes they abandon their parking spots because of blood curdling screams emanating from just inside the brush line. Others have reported having their vehicles shaken violently or struck by something amazingly strong. A smaller number of people have reported actually catching a glimpse of a huge, hair-covered creature that glowered at them from the edge of the woods or, in rare cases, actually approached their vehicle and peeked in the window or windshield at uncomfortably close quarters. These types of experiences are not limited to only the Lookout Hill area; however, they have been reported for several miles up and down the river between Luling and Gonzales. Mobile homes have been slapped and shaken, pets have come up missing and strange tracks have been found over the years. 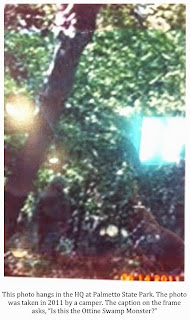 The legend is not only historical in nature, however, as incidents continue to occur. Recently, I investigated the report of a couple that was out for an afternoon hike at Palmetto State Park when they had an encounter with something that matches the description of the thing. The couple had a rock thrown at them, heard odd howling vocalizations and, finally, caught a glimpse of a large, bipedal, black creature tearing from one side of the hiking trail to the other. You can read my investigation report on this incident here. Too, Palmetto State Park, and by extension, the Texas Parks & Wildlife Department, seems to have embraced their swamp monster. A framed photo, taken by a camper in 2011, allegedly showing the beast, hangs in the park headquarters. In addition, a small bigfoot figurine sits on the mantle, swamp monster t-shirts are for sale in a wide range of colors and a pamphlet titled The Thing of Ottine Swamp is available, free of charge, to park visitors. The legend is alive and well.

While South-Central Texas does not contain the type of habitat most would consider ideal for a sasquatch-type animal (the possible exception being Ottine Swamp) the area actually has a long history of encounters with such creatures. The tales of the wildwoman of the Navidad, the beast of Bear Creek, the bear king of Marble Falls, the Converse werewolf, the naming of Woman Hollering Creek, the hairy man of Round Rock and, now, the Ottine thing all contain elements that, if described today, would have most people thinking “bigfoot.” Granted, most of these tales involve flaps of sightings that took place decades ago but encounters continue to be reported sporadically, especially along the San Marcos River between Luling and Gonzales, to this very day. 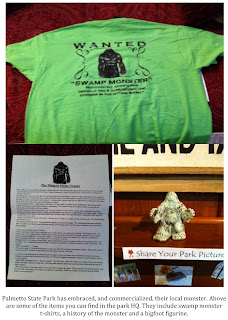 Does the Ottine Swamp hold a secret? I cannot say for sure. What I can tell you is that a few weeks ago I traveled to Palmetto State Park to meet with the couple that had reported seeing the creature. I arrived the day before I was to meet with this couple. I wanted a chance to walk the trails and get the lay of the land prior to visiting with them. As I explored the area where the pair claimed to have had a rock thrown at them, I heard a deep, guttural growl coming from the brush. I backed away a few steps and the growling ceased. I took a few steps forward and the growling resumed. I stared into the brush but saw nothing. The growling was loud enough to give the impression that the animal making it was very close. I felt like I should have been able to see it but I could not. I retreated again but the growling continued, albeit from a more distant location, and went on intermittently for the next ten minutes, or so, as I resumed my hike. I tried to record the growl on my iPhone but by this time it was too distant to pick up. The whole experience was rather odd. I simply don't understand why I was unable to see an animal that, judging by the deep tone of the growling, must have been fairly large. It was close yet, somehow, remained out of sight.

As I approached my campsite, I stopped and looked back at the primeval swamp. The sun was low but there was still a solid hour of daylight before dusk. Even so, the gloom emanating from the swamp was almost palpable. The children of some campers who, when I had started my hike about two hours before, had been playing near the boundary of the swamp, had moved closer to their tents, trailers and parents, away from the dark wood line. Too, the nightly chorus of insects and frogs had already started within the marsh. Despite what my watch told me, darkness had already come to the Ottine. I smiled and walked back to my camp. I realized that whatever secret the Ottine Swamp holds, it would remain secret at least one more day.

Maybe it will remain so forever.