Converse, Texas is not the kind of place one would normally associate with a monster sighting. The town, while small (it encompasses only 6.3 square miles), is now densely populated and heavily developed. Sitting only 15 miles to the NE of downtown San Antonio, it has become hard to discern where Converse ends and the Alamo city begins. It is known for many things these days; great Mexican food, the Judson High School Rockets football team, and Randolph Air Force Base to name a few. Converse, however, was not always so developed and civilized. Like most of Bexar County, it was once not much more than arid plains, rocks, cactus, and chaparral scrubland. Such lonesome country often holds secrets. The area that was to become Converse is no exception. 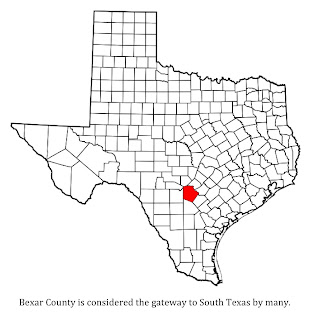 It is said that back in the mid/late 1800’s a rancher moved onto a plot of land near what is now Converse. The man was a rugged sort who had grown up in true pioneer fashion. Some versions of the tale suggest he was a military combat veteran who moved to the area in an effort to put the horrors of the Civil War behind him and live out his days quietly on the south Texas plains. This man had a son who was something of a disappointment to him. The lad was frail, bookish, and preferred studying to wrangling and hunting. This frustrated the old rancher to no end and he decided to “make a man” out of the boy.

To this end, the rancher decided to send his son out hunting. He hoped that the boy would take a liking to the sport and after making his first kill would prefer the more manly activity of hunting to that of reading and studying all day. The old man put a long gun in the boy’s hands and instructed him to go out and shoot a deer; the family needed meat after all. He directed the boy to hunt a heavily wooded area along a creek called Skull Crossing. The boy was reluctant at first and resisted but, one way or the other, was finally coerced into going. The old rancher watched with high hopes as his son walked away from the homestead toward the woods.

The old man would soon be disappointed, however, as his son returned a few hours later empty-handed. When chastised for returning without any game the boy told his father that he left the area out of fear as he had spotted, and been stalked by, a monster resembling a werewolf. The father immediately dismissed this wild story and cajoled his son into returning to the area to finish his hunt. The boy did not want to go but his father left him no choice. Trembling and fearful, the boy trudged back out to the ominously named area of Skull Crossing. Little did the old rancher know it would be the last time he would see his son alive. 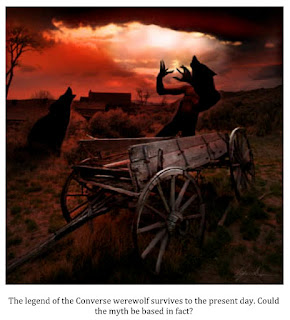 Hours passed and darkness began to fall. The old man, the story goes, began to worry and have second thoughts about sending his inexperienced son out into the woods alone. While he hoped the reason the boy had not returned was because he had yet to make a kill, he began to have a sinking feeling deep in his gut that something was wrong. Deciding not to wait any longer, the rancher rounded up some neighbors and they made their way toward the wooded area near Skull Crossing in search of the boy.

What they found upon arriving there is the stuff of nightmares.

The search party happened upon a monstrous, hirsute creature hunched over the body of the rancher’s son. The beast was in the act of ravenously devouring the boy when discovered. The men got off a few shots at the monster but it bounded away at lightning speed. The “werewolf,” as it was dubbed, was described as standing between 8-9 feet tall and covered in dark hair or fur. Members of the search party described it as being some kind of unholy combination between a wolf and a man.

The old rancher was, understandably, devastated by the death of his boy. He blamed himself for not believing his son’s story and believed he sent him to his doom by forcing him to return to Skull Crossing to complete his hunt. The versions of the tale I’ve heard say that the rancher died shortly thereafter. Some versions say he became reclusive, refused to eat, and wasted away. Others say that he committed suicide by setting fire to his own home and burning up. Either way, it was a sad end all the way around.

Did this event actually occur? You won’t find any old newspaper accounts documenting the incident. I’ve looked and came up empty. Somehow, though, the tale has lived on for more than a century. Should the story be dismissed as an old campfire story? A myth? I’m not so sure. There are similar stories involving werewolves and other hair-covered monsters that live on in the folklore of the region. The story of the Wild Woman of the Navidad, Bear King of Marble Falls, the legend behind Woman Hollering Creek, the Hairy Man of Round Rock, and the mysterious limestone carving dubbed the Cleo Face all allude to old tales of beasts of similar appearance. 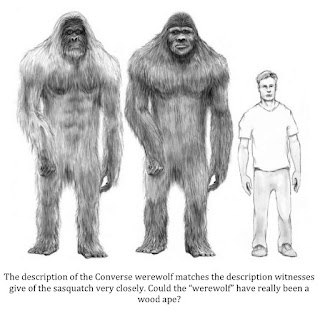 Much folklore has a basis in truth. I think it is possible that the legend of the Converse werewolf had its genesis in an actual event. Some believe that if a young boy was killed near Skull Crossing, it was likely the result of an attack by an animal much more mundane than a werewolf. That is fair enough but it fails to take into account the description given by the men who spied the beast. The animal was described as bipedal, covered in hair, 8-9 feet tall, and lightning fast. Whatever the animal was, it was not a mundane member of the local fauna. In fact, the description attributed to the animal, if given today, would immediately bring to mind only one animal; the sasquatch.

Many bigfoot enthusiasts seek to dismiss the idea that the Converse werewolf might have been a wood ape. No doubt, this is because of the alleged death of a human being at the hands of said beast. Others, myself included, are not so quick to dismiss the possibility that a sasquatch is the villain behind the legend.

Most who entertain the idea that North American wood apes might exist speculate that their diet is likely similar to that of black bears. Black bears do subsist mainly on plant matter. Berries, roots, and nuts, to name a just a few items are on their menu. Black bears also indulge in eating insects, grubs, birds, and mammals when the opportunity presents itself. While rare, black bears do occasionally hunt humans for the express purpose of devouring them. If wood apes exist and if their diet is, indeed, similar to that of black bears then it would not be out of the realm of possibility that a hungry sasquatch might take advantage of a situation where there was an easy meal to be had. 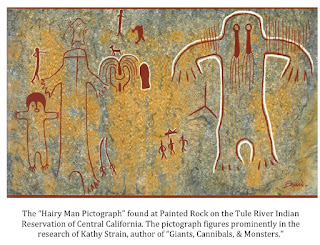 Admittedly, this is contrary to the behavior most often reported by witnesses who claim to have seen wood apes. Most witnesses report that these animals, once they realize they have been spotted, simply retreat back into the forest and make themselves scarce. It must be acknowledged, though, that tales of cannibalism and abductions have been associated with these animals since time immemorial. Many Native Americans feared sasquatches and believed they would snatch a wayward member of the tribe when given the opportunity. One simply cannot, in my opinion, use ancient Native American tales as supporting evidence that the sasquatch is real while ignoring other details of the legend.

People continue to disappear in the wild places of North America to this day, some under very odd circumstances. Many are never found. Most, no doubt, simply get lost and die of exposure, dehydration, etc. Others are likely the victims of foul play of a very human nature. Could a small minority of the missing be victims of abduction at the hands of wood apes? The legendary accounts of Albert Ostman, Muchalat Harry, along with the First Nations legends, suggest it is at least a possibility.

The story of the Converse werewolf is slowly fading away now. Sophisticated suburbanites have little time for such tales. As the years pass, fewer and fewer south Texans hear of the legend. Even those that have heard the story tend to dismiss it as mere folklore. It is a scary story to be told around a campfire or at Halloween and nothing more. To those of us who pursue these creatures and venture into the deepest forests and most remote places in North America the story has a different meaning. It is a cautionary tale. Fact or fiction, it reminds us to take nothing for granted, to always be careful, and aware of our surroundings.

I suppose that we’ll never really know what, if anything, happened at Skull Crossing all those years ago. Did a young boy really die? Did a grief-stricken and guilt-ridden father join his son in death soon thereafter? The truth, I’m afraid, has been buried along with the early residents of Bexar County.

Maybe it is best it remains there.
Posted by Mike at 1:28 PM