Back in February of this year, a reader sent in a report saying that he had struck a large black cat of some kind with his vehicle in central Texas. The reader said he was absolutely positive the animal he hit was not a hog, dog, coyote, or anything other than a large cat in the 80 lb. range (you can read the initial report of this incident here). I get a lot of reports from readers who claim that they have seen what can only be described as black panthers. Most have nothing to back up their story. That is not to say they aren’t telling the truth; rather, it means only that there is no photographic or physical evidence to support their story.

This time was different.

The reader who reported striking the cat had the wisdom to examine the front end of his vehicle and discovered, in his words, a “collection of long semi-soft black hairs that had become stuck in the plastic.” This gentleman collected the hairs and mailed them to me in the hopes that I could have them analyzed and find out exactly what it was he struck.

To say I was excited about this development would be an understatement. I realized that there was a good chance that these hairs would turn out to be from something mundane but I had high hopes that I had been provided with evidence that might, if not prove, at least support the possibility that there are large undocumented black cats of some kind living in Texas.

The first thing I decided to do was to get the hairs to a friend of mine who has some background in hair analysis. To be completely up front, he is not a professional when it comes to this sort of thing but is very competent, owns his own microscope, and has the know how to quickly identify the hair of most common North American mammals. He holds a degree in Animal Science from Tarleton State University and is a life-long hunter, trapper, and naturalist. He is more than qualified to do the initial analysis of these hairs. I wanted to make sure that I didn’t have a bag full of hog hair before I went out on a limb and sent the samples in to a university or lab for analysis. His results, supported with photographs of the samples, yielded results that were promising.

My friend found both undercoat and guard hairs among the samples. His comments include the following statements:

“I got a scale cast on the same hair from the undercoat. Thankfully, we didn't have to waste that sample. The hairs from the undercoat look like cat to me. The guard hairs are tougher. They are so thick and dark that I can't see the medulla with this microscope.” He added, “I'll try doing a scale cast on one tomorrow to see if the pattern matches the undercoat. I'm a bit paranoid, but I wouldn't put it past someone to throw both dog and cat hairs in a bag to see what we would do. However, from a quick glance, the scale pattern appears to be overlapping nicely on the edge of the guard hairs too.” 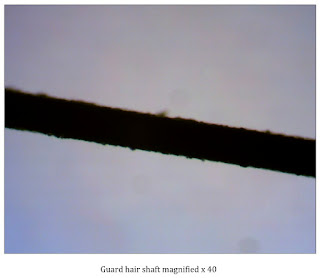 “So far, it still has potential, because the cuticle has an acuminate imbricate pattern and the medulla appears to be uniserial on the fleece. If I see that on the guard hair, then we might want to have someone confirm what I'm seeing, especially if they have a polarizing microscope.”

The next conversation centered around the possibility of misidentification. Could the reader who struck the animal have made a mistake? Could the animal have been something common? Assuming the reader was right and the animal weighed in the 80 lb. range, there are not that many other candidates to choose from that might have been mistaken for a large cat. In my mind, the list is limited to a feral hog, coyote (though it would be a huge one), mountain lion or large breed of domestic dog. The response was:

“Its definitely not a hog, that's 100% certain. I'm still working on the dog aspect. I just want to make sure. As for domestic cat vs. wild one, that is something you can usually rule out by the other characteristics of the hair, such as diameter. The guard hairs are the ones I'm really looking at closely right now. Melanistic cats of any kind aren't really uncommon Those guard hairs are awfully thick for most small cats though. Truth be told, it looks a heck of a lot like leopard hair, but don't quote me on that (I’m including this statement since I’m keeping my friend anonymous).” 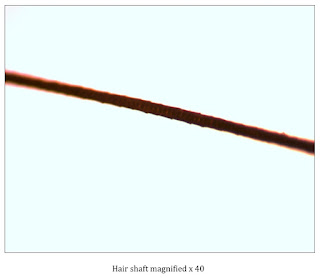 Later, my friend came back with the following:

“It looks a whole lot like these leopard hairs. These are using a special microscope, so they look a bit different than what I'm seeing, but the structure is the same. Look at the medulla running through the center of the shaft. Notice how they look like single file stacked disks? That's a uniserial pattern. You don't see that in dogs. The fleece hairs look like this, except that the medulla is black and the cortex and cuticle are dark brown. Which would make the hair appear black. See the very small notches on the side of the hair that look like they are overlapping at pretty even intervals (bottom link)? That is the cuticle. Your fleece hairs have a similar pattern.” 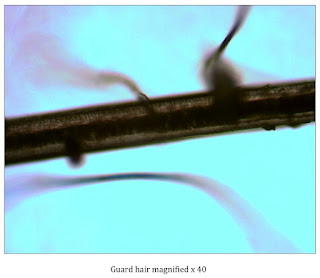 Intrigued, my friend, dug into a copy of the “Atlas and Key to the Hair of Terrestrial Texas Mammals” supplied to me by a professor at Texas Tech University. Nothing he found there changed his mind that these samples likely came from a cat of some kind. His final remarks on the matter were:

“Your particular hairs are pretty interesting. The scale pattern isn't all that remarkable. You can see it in cats and even in some dogs. The medulla is where it starts to get interesting. The medulla is really broad, is distinctly uniserial, and is more complex in the guard hairs. Throw in the fact that the hairs are visually black, which means a dark medulla and red edges under a scope, and they need someone with a better grasp to look at them. One thing you might try is forensics labs, rather than wildlife folks.” 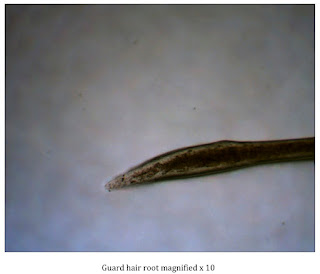 Encouraged, I set about sending emails to the biology departments of various Texas universities. I included the photos of the hairs included in this post as well as the comments made by my friend during his initial analysis. I was confident that, if nothing else, enough had been done to convince someone at one of these universities to take a look at these samples. I would be greatly disappointed, however.

Most of my inquiries went unanswered. I suppose my request was not even deemed worthy of a polite dismissal. I received one reply in which a professor, in what I felt was a somewhat annoyed manner, lectured me on the fact that “black panthers do not exist.” He mentioned that there was zero evidence supporting their existence and there was, “simply no such thing.” I did receive a nice email from a professor at Texas A&M who put out my request on some sort of academic forum. This was somewhat beneficial in that it resulted in a professor from, of all places, Korea sending me the copy of the hair atlas mentioned above. No takers on actually examining the samples, though.

I received only two replies expressing any interest whatsoever. Both of these replies came from the respective heads of their university biology departments. Both said they would forward my request to their mammalogists. One of the two even regaled me with the story of his own black panther sighting in SE Texas a few years back. As you can imagine, I was very encouraged by this development and excitedly awaited further word from either of these two. It didn’t happen. I waited one week, then two. Nothing. Finally, I emailed them both again politely asking if they had spoken with their colleagues regarding the hair samples. This time, only one of them replied (the one who claims to have had a sighting himself). His tone was very different this time around. I might be reading too much into his short reply but he seemed curt and a bit annoyed that I had contacted him again. He said only, “It would do you no good for me to look at the samples.” I pointed out in reply that he had mentioned discussing the matter with his mammalogist. His one sentence reply said he would speak to the gentleman. Nearly two months have now passed and I have heard nothing back. It is pretty clear that I’m not going to…

I have had many people ask for a status report over these many weeks since I received these hair samples. I’m sorry it has taken so long. I had hoped someone would take a look at these samples and, even if it took a while, I would have something concrete to report. I didn’t want to engage in speculative theories. I wanted to have hard results. I guess that is not to be.

I find myself in a rather ironic situation. I am being told by biologists that there is no such thing as black panthers because there is no evidence to support their existence. When I share with these biologists that I may very well have evidence that could support the existence of these animals I am told that my evidence cannot be valid since they don’t exist. The circular nature of these arguments is incredibly frustrating.

I am at an impasse and don’t know what my next move will be. I am open to suggestions. If anyone out there has expertise in this area or can suggest someone that does I would appreciate it if you would contact me. I think that, based on the preliminary analysis, I might have something important here. I want to find out.

I’m hoping someone else out there feels the same way.
Posted by Mike at 5:18 PM