I apologize for the long delay in between posts. It has been a pretty busy couple of weeks for me. Spring football is in full swing and that is taking up a lot of my time. The good news is that it wraps up at the end of this week and my afternoons and evenings will be freed up quite a bit. Also, this is “Fitness Gram” time in Texas public schools. The Fitness Gram testing is similar to the old Presidential Physical Fitness challenge. We have to test each kid in school on push-ups, sit-ups, sit and reach, trunk lift, and a running test (either something called the pacer test or a mile run). We also have to weigh and measure height on each kid in school. The actual testing isn’t so bad; it is the recording of all that data that takes all the time. The software we work with is not exactly user friendly, to say the least. Enough of all that, let’s get down to more interesting things. 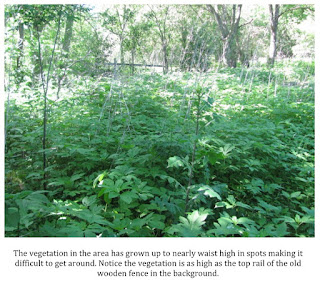 I did manage to get out yesterday (Sunday) afternoon to my study area north of Temple, TX and check on the two game cameras deployed there. I was about two weeks overdue on checking them. You may recall that I had three cameras and one was stolen leaving me with only two in this area. As disappointing as this event was, the lack of photos from the other two cameras was even more depressing. I was hoping for better this time around. More on that in a moment.

I was a bit surprised at just how grown up the vegetation had gotten. Everything is fully greened up and it…is…thick. The vegetation was literally headlight high on my Tundra in the study area. The trip to the cameras, despite being short in distance, turned into quite the ordeal as all the underbrush, vines, thorns, etc. fought me every step of the way. It was downright impassible in spots. Though not as wet, it reminded me a bit of some of the old brush-busting trips out to the Big Thicket National Preserve during the TBRC’s Operation Forest Vigil. There were literally points where I had to stop and backtrack as moving forward was simply not an option. 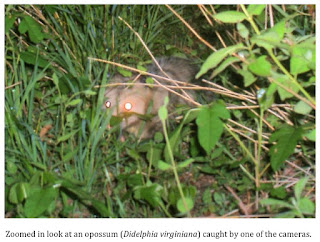 The game trail on which the cameras were deployed remained relatively clear though the grass had grown up to the height of my knees in most spots. I decided at that time to pull the cameras. While the trail remained relatively clear, getting to it was quite challenging. Even though the wildlife in the area would be able to navigate through the thicket easier than I, it was clear that the creek bed itself was going to soon be the thoroughfare of choice for anything traveling through this area. I decided against moving the cameras to the creek bed at this time. Spring is the time when we tend to get strong thunderstorms in these parts and the creek rises quickly. I’ve lost several cameras here due to rising water and don’t want to do so again. I’m thinking of moving these cameras to my study area in Waxahachie at least until we are well into summer. Rain is sparse during the summer months and I’ll feel better about posting the cameras on the dry creek bed at that time.

Nothing unusual was photographed during this set. I was a bit disappointed by the small number of photos taken this time around. I am not sure if this is due more to a lack of animal movement through the area or if the performance of my aging Cuddebacks is declining. I tend to think, as I mentioned above, the wildlife is starting to use the creek bed as their travel route due to the increased difficulty in navigating the thick vegetation. At least I hope that is the case. If not, I’m going to be in the market for some new cameras soon. 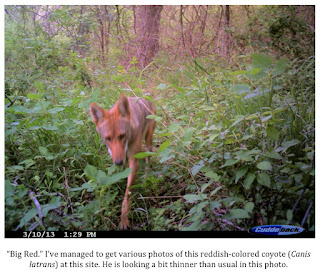 I did get some nice shots of deer, an opossum, and a cottontail rabbit. I also got a nice shot of “Big Red.” Red is a coyote I’ve photographed several times. While nearly all coyotes have some of the reddish-orange coloring in their coats, it is the dominant color of this animal. He is colored almost like a red fox. I’m mildly concerned about him as he appeared quite gaunt in the photo. It could be a trick of perspective or simply be that the pickings have been slim this winter. I’m hoping to see him looking thicker the next time I get a photo of him.

As you can see, not much to report on as a result of this trip. I am due to check the cameras in Waxahachie in a couple of weeks. As mentioned above, I’ll likely place these two Cuddebacks out there at that time. Hopefully, the extra camera presence will pay off.