I was able to get up to Waxahachie last Sunday to check on my cameras. To summarize, the property owners have had a series of sightings, though none in the last month or so, of large cats on their property. They have reported seeing at least two different big cats. One, judging by their description, is a mountain lion. The other cat, described as being 4-6 feet long, weighing between 80-100 lbs., and very dark, if not black, in color is more problematic. As readers of this blog know, “black panthers” are not supposed to exist; at least not in Texas. This particular cat acted in a particularly menacing manner when the property owner walked from her porch and turned a corner around a horse trailer to come face to face with it. Various incidents and sightings, not just by the property owners but neighbors as well, have continued since then though on a sporadic basis. 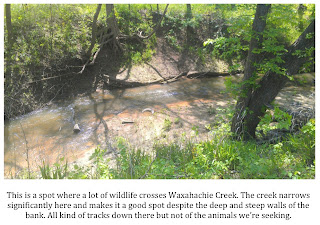 As you can imagine, I was anxious to get up there to see what, if anything, my cameras had been able to capture. The cameras had been in place for a little more than 5 weeks and I was hopeful that I would have an image of a big cat. I met fellow NAWAC Investigator and friend, Justin Horn at the property and the two of us, along with one of the property owners, began “making the rounds” to check on the cameras. 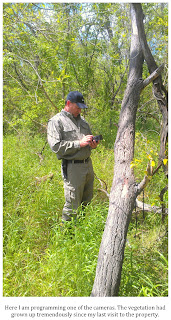 When we arrived at the location of the first camera we were amazed at just how much the vegetation had grown up. It was literally waste high in spots. I realized right away that this was going to cause some problems in identifying any small to medium-sized quadrupedal animals that might have been photographed. I feared I was going to have a lot of shots showing only the backs of any animals that might have moved through the area. That concern turned out to be, mostly, unwarranted. The real problem caused by the taller vegetation turned out to be the sheer number of false triggers it caused. The cameras, during the day, are activated by movement. The swaying of the now much taller grasses and weeds triggered hundreds of events on the camera. It has taken me the better part of a week to go through them all. Camera 1 did yield a couple of interesting images. The first was of a small/medium-sized animal of some sort running at a pretty good clip away from the camera. There are actually two animals in the video. The first appears in the upper left hand portion of the frame at the very beginning of the video. It appears only briefly before moving out of the frame to the left. Several seconds later is when the second animal appears. I’ve shown the video to several people. Opinions have ranged from raccoon to feral cat. I would welcome your opinion. The video is below.

Camera 1 also captured an image of a weasel-like animal moving right to left across the trail. I was a bit puzzled initially as to what it might be. It is dark except for some light markings around the face. I thought it might be an otter but the tail seems too bushy. Again, I showed the video to some qualified folks and got a range of opinions. Otter and weasel were mentioned but I have come to agree with one gentleman who said what I have video of is a solid black skunk. Skunks with no stripes do occur and, back in the heyday of the fur trade, their pelts were quite valuable. It is possible that the skunk does have stripes and the camera angle is not quite right to view them but I honestly don’t think that is the case. I think this is a solid black skunk.

The question would likely have been answered if the camera had activated sooner. As you can see, the camera failed to activate until the skunk was almost out of the frame. This slow activation is a real problem and can be observed in the video of the coyote below.

Notice how close the coyote is to the camera. The animal was practically on top of the camera before it managed to get going and take the shot. This slow activation practically guarantees that no photos of an animal moving at even a moderate speed is going to be captured on video; especially if the animal is moving perpendicular to the camera. So, what to do about this issue? My cameras are not cheap but would certainly not be considered “top of the line.” I have budgeted to get a decent number of cameras in the past but think I am going to change tactics and go with more expensive models in the future. Though I’ll have fewer cameras, and the higher dollar models have shortcomings, too, I think I’ll get better results.

Camera 2 yielded no useful shots at all. It did yield hundreds of false triggers along with a couple of videos of a squirrel, an armadillo, and some birds. I was really disappointed that this location didn’t produce more action. Worse, the camera acted a bit funny and didn’t cooperate when I tried to reprogram it after putting in fresh batteries. I decided to leave it in place and give the spot one more try. Also, I didn’t want to invest too much time in relocating the camera when I was none too sure it was even working properly. Again, discouraging.

We trekked on to camera 3, which was located adjacent to a fairly large pond. This camera is one of my older Cuddebacks. This is an old warhorse of a camera that has been deployed for most of the last decade in spots ranging from the Big Thicket of SE Texas to the Ouachita Mountains of SE Oklahoma/SW Arkansas. This model does not have video capability but still takes pretty nice color photos. This is the only camera to capture a cat. The bobcat photos below are not what I was hoping for but do show that the camera is in good working order. This location didn’t produce many events so we decided to move it to a spot near the rear of the property. 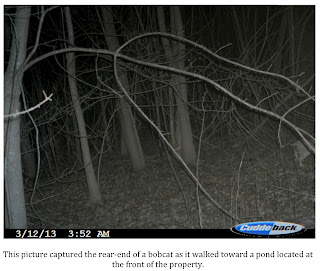 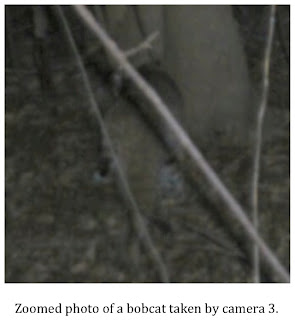 We placed camera 3 near another pond that is all but hidden from view from anywhere on the rest of the property. You really have to be right on top of it before you realize it is there. Waxahachie Creek runs by only 50 yards or so from the pond. The thin strip of land between the creek and the pond create a funnel of sorts that, I’m hoping, wildlife uses to move from one side of the property to the other without fear of detection. I really wanted to put camera 3 on a game trail somewhere in this “funnel” but was running short on daylight. That being the case, I decided to place the camera back at a spot near the hidden pond. We had located a lot of tracks around this pond along with some very interesting scat. The scat was of a pretty decent size and full of fur and bone fragments. It was on top of a large rock on the banks of the pond. Justin took a photo of the scat and I compared it to photos of cougar scat online. They look pretty similar to me. Take a look for yourself below. 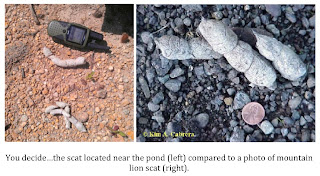 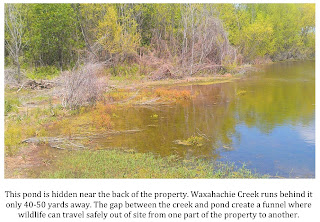 I plan on checking my remaining two cameras north of Temple soon; possibly as early as tomorrow. If I find they have not produced anything unusual I will likely pull them. If I do, I may deploy them on the Waxahachie property.

Again, my efforts have failed to yield the photo/video of a long-tailed cat I’m hoping to capture. I did, however, very much enjoy the experience of getting out and enjoying the outdoors with a good friend, interacting with friendly folks (property owners) I likely would never have met had I not pursued this rather unusual hobby, and get a glimpse into the behavior of wildlife that most folks don’t ever enjoy. I also had the opportunity to enjoy a fine meal of fried catfish at the Catfish Plantation in Waxahachie. Supposedly, this is one of the most haunted buildings in the great state of Texas. Nothing spooky occurred but the food was good.