Below is a photo of a 2000 lb. manta ray (Manta birostris) that was caught off the jetties in Galveston sometime in the early 1900's. This brute was caught by a 75-year old man. I can only imagine the fight he had on his hands prior to landing this fish. 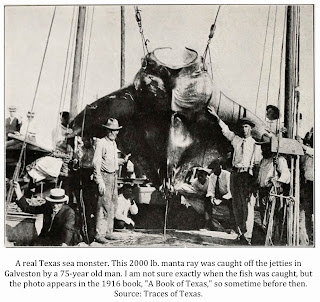 Big rays like this were once commonly referred to as devil fish or sea devils and can reach widths of more than 20 feet. It is likely a safe assumption that some sea monster reports from years past were actually sightings of huge manta rays.

Source: Traces of Texas
Posted by Mike at 2:36 PM