According to an ABC News report and Yahoo, a Canadian fisherman vacationing in Florida hooked more than he bargained for when he tangled with the most feared fish in the sea.

Fab Marchese, of Ontario Canada, was part of a charter fishing about 30 miles west of Treasure Island, FL. When he first spied what he recognized as a great white shark. The Captain of the charter, Joe Maisano, also spotted the massive shark, a rare sight in the Gulf of Mexico.

“I have seen Jaws enough times to know what they look like,” said Maisano who, along with his father, Sam, have operated Go Fast Fishing Charters for more than a decade. In all that time on the water neither had ever seen a great white before. This one turned out to be a massive specimen. 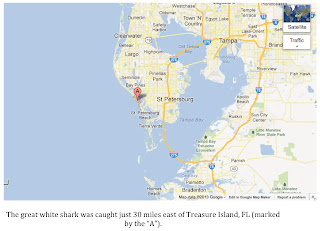 “It looked like a submarine with a tail,” the Captain told ABC News. Click here for video.

Maisano began chumming in earnest after the shark sighting while Marchese cast out a line in the direction of the great fish. Within 20 minutes Marchese was able to set the hook on the shark.

For the next 3 hours Marchese held on for dear life. Captain Maisano pulled the boat’s anchor and allowed the great white to tow the boat in the hopes the giant shark would tire. Marchese said it was some fight.

“We had hooked a 350 lb. goliath grouper earlier and you cannot compare the fight with the great white,” he said.

Maisano added, “It was like a slow steady pull. Great whites are not very fast sharks so it was a slow, solid weight.”

Indeed. Great whites are among the largest sharks alive today but this one was big even by those standards.

The great white is a protected species and, so, had to be released by the fishermen. The men, however, did get plenty of photos and video before this catch of a lifetime slowly swam away. 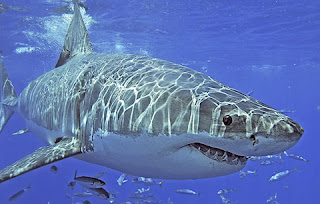 While rare, the great white shark is listed as a shark species inhabiting the Gulf of Mexico. White sharks cruise mainly the eastern portions of the Gulf but do range west of the Mississippi Delta down to at least the Corpus Christi and Padre Island shores. It is thought that their presence off the Texas coast is infrequent at best but it does occur. In fact, white sharks are present in Texas waters often enough to warrant recognition by the Texas Parks & Wildlife. If you visit the TP&W website you will find the following statement on possession and bag limits for sharks:

So, the next time someone says that great white sharks do not live anywhere close to Texas you will know better. These massive predators do, at least on occasion, swim the waters of the Gulf of Mexico but don’t let this knowledge trouble you.

They have always been there.
Posted by Mike at 7:19 PM