Sometimes you get the bear; sometimes the bear gets you.

The bear got me yesterday on my latest camera trap maintenance excursion. To say it was a rough day would be an understatement. I’ll break it down for you. 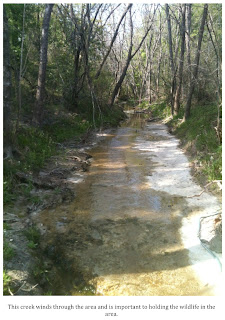 I was actually a week overdue on checking my cameras that are deployed in my study area NE of Temple, TX. This area has been very good for me and has yielded some terrific shots of a wide variety of animals. I’ve managed to get photos of coyotes, bobcats, river otters, great blue herons, vultures, raccoons, opossums, and more. Regular readers will recall that it was a series of mountain lion sightings that prompted me to investigate the area originally a year and a half ago. There was another cougar sighting a little more than a month ago very near the area where my cameras had been deployed. The sighting prompted me to get cameras back up out there and I had high hopes that I’d have pictures of the big cat that has eluded me. 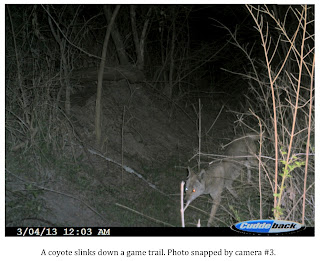 I arrived at the property and made my way to the creek that winds through the property. I have the cameras deployed above the creek on a game trail that is well established and worn. I walk this trail once I get parallel to the location of camera #1 but walk the creek bed to that point as the vegetation is very thick and full of thorny vines. As I descended into the creek bed, my left knee buckled and sent me tumbling head long into the rock strewn creek about five feet below. I’ve been having some trouble with my left knee and have even taken to wearing a light brace just to walk around and carry out my daily activities. I was not wearing the brace yesterday (dumb mistake #1) and it cost me. To say I banged myself up would be an understatement. Fortunately, I didn’t land on my head. The large rucksack on my back proved to be a mixed blessing. It made me pretty top heavy which contributed to my inability to regain my balance after my knee gave out but provided a bit of cushion as it absorbed some of the blow when I landed in the creek bed. I gathered my now bruised, wet, and muddy self and trudged on.

I arrived at Camera #1 without further incident. I changed out the batteries and loaded the images from the camera onto my laptop (the laptop was in my ruck and I’m extremely fortunate it wasn’t damaged in my fall). I was disappointed at how few pictures the camera had taken over five weeks. There was nothing of any real interest captured. A few deer photos were all I got. It was time to move on to camera #2. 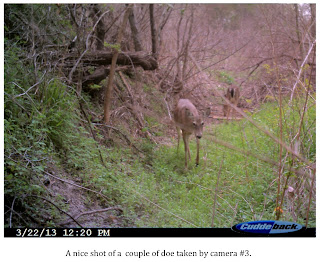 I moved down the game trail and struggled to find the second camera. The area has greened up considerably since the cameras were deployed last month and I just figured some brush had grown up and was making the camera difficult to see. I decided to go ahead and move on to camera #3 and hit #2 on my way back.

I located camera #3 easily and downloaded the handful of images it had snapped. Again, I was disappointed that more photos were not taken. There just didn’t seem to have been much animal movement over the last few weeks. While nothing unusual was photographed, I did get a handful of nice deer, coyote, raccoon, and skunk shots. I reloaded the camera with a clean memory card and new batteries and made my way back toward the spot where camera #2 should have been located. 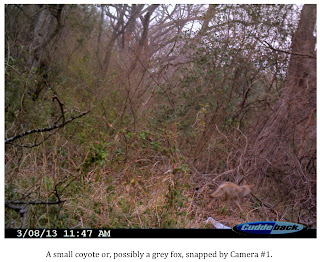 I continued to have trouble locating camera #2. Understand, I have all the locations for my cameras loaded onto my GPS unit. I do not rely strictly on my memory to find the cameras. I simply should not have been having so much trouble in finding this camera. It was then that I began to think it might be gone. I’ve had cameras stolen before but they were in areas that were much more heavily trafficked by people. I just couldn’t believe anyone had been back here but what other explanation could there be? Earlier, I had gone to the tree on which I was sure I had mounted camera #2. I returned to that tree. It wasn’t there but this time I knelt down at the base of the tree and brushed some of the leaf litter away. It was then that I uncovered the two bungee cords that had been holding camera #2 to the tree. There was no longer any doubt about what had happened. The camera had been stolen.

I became pretty upset with myself. I failed to secure the cameras with cables and locks this last redeployment. Working alone, room in my rucksack and the weight of the equipment in it are always issues. I got lazy this last time. I’ve never had a hint of a problem on this property before and, if you watched the video I shot the last time out, you can see it is pretty isolated. Not only is it isolated but it is pretty difficult to get to the spots where I have cameras. One would have to negotiate the steep walls of the creek (not always easy as described above), the slick creek bed itself, the heavily wooded, brushy, and thorny vegetation, for a quarter of a mile to reach the first camera location. Reaching the location of camera #2 requires an even longer brush-busting hike. Regardless, somebody made their way back there and came across the camera. The bottom line is I got complacent and didn’t properly secure the camera (dumb mistake #2). 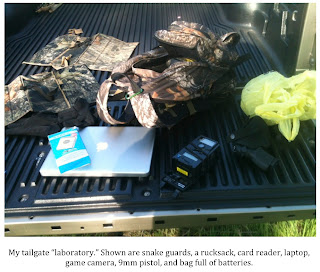 Dejected, I made my way back toward the location of camera #4 which is not too far from where I had parked my truck. I reached the spot where I typically climb out of the creek bed and started up. As I did, soil underneath my right foot gave way, which caused me to slide back into the creek about six feet below. I was leaning forward as I made my way up the bank so I didn’t fall backwards but I did bang both knees very hard on the rocky bottom of creek bed. Usually, I wear knee pads for situations just like this but had, in my haste to get to the site, forgotten to pack them this time (dumb mistake #3). I was comforted a bit by the fact that this fall was simply bad luck and not caused by any physical infirmities on my part. Now thoroughly banged up, I very, very carefully made my way up the side of the bank and limped toward camera #4.

I had a bad moment when I didn’t initially see the camera but it turned out to be right where I left it. I was especially thankful, as, like the other cameras, I had not locked this one up. I decided to pull this camera. It is one of my newer and more expensive cameras and having it stolen would really be painful financially. I had been thinking of taking it and deploying it in my second study area outside of Waxahachie in a couple of weeks anyway. The theft of my camera here helped finalize that decision.

I took the camera back to the truck and was extremely disappointed to see that it had not captured a single photo of an animal. The camera was in working order as it did get several shots of me as I was setting it up but nothing else. I have to admit I’m puzzled as I thought it was in a really nice location overlooking a game trail. I guess it is a moot point now as I’ve decided to move it. 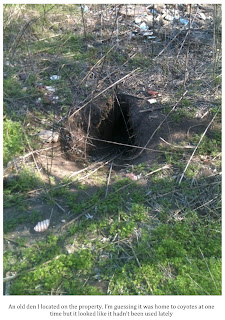 As I said in the opening, it was a pretty disappointing trip. Few photos, physical pain, and a stolen camera certainly ensured that. Still, it is all par for the course. You have to take the good with the bad when you do this sort of thing on a regular basis. Some pain is inevitable (though I think I am going to finally break down and go get my left knee checked out). So, too, is camera attrition. Losing cameras to the elements or thieves is simply going to happen from time to time. What are you gonna do? I could leave the cameras in my closet and they would be safe from thieves but sitting in a closet is not why cameras are made. There are no pictures to be taken there. So, I’ll replace the lost camera when I can and continue to “risk it” by putting them out. I will, however, be more vigilant about locking them down.

I decided to make the best of a bad situation and take a lot of still shots. The area is really nice and I failed to take any shots of the area the last time out. I even explored a bit and sniffed around areas I had not previously explored. I was rewarded with the discovery of a large burrow. I’m guessing it was likely a coyote hideout but looked like it hadn’t been occupied for some time. I’ve included some of the still shots in this post. I will likely post the rest of the Facebook page. Head over there and give me a “like” if you have a moment or two.

It would do me some good.