What some are calling the eight-legged discovery of the millennium occurred last month in NW San Antonio. An endangered species of spider, not seen in more than three decades, was found in a natural hole in, of all places, a highway median.

A biologist discovered the presence of a Braken Bat Cave meshweaver (Cicurina venii) after a heavy rain exposed a six-foot deep hole in the median area near the intersection of Texas State Hwy 151 and Loop 1604 where the Texas Department of Transportation is building an underpass. Biologists from a company called Zara Environmental have been working side by side with TxDOT construction workers on the project since April as the area where the project is located is known for its abundant wildlife that includes songbirds and rare cave animals. After the eyeless spider, no larger than a dime, was positively identified the project was halted. Just how long the $15.1 million project will remain on hold is anyone’s guess but it doesn’t look like it will restart anytime soon. 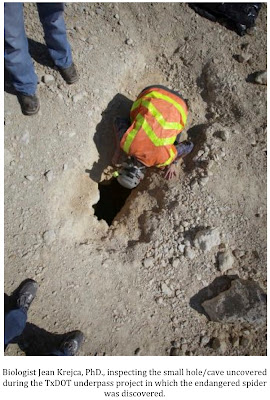 The Braken Bat Cave meshweaver was added to the federal government’s endangered species list in 2000 along with eight other “karst invertebrates” that, as far as anyone knows, are found only in Bexar County, Texas. The specimen was collected in a bottle and dissected; a step necessary to ensure proper identification. The collection and dissection of endangered species is allowed for the purpose of identification if done by someone with a federal permit. Zara Environmental biologists meet that criteria. While some, no doubt, will be angered by this development, it was necessary. It seems that this species is identical in appearance to another spider that lives in the region. The differences are all internal and there was simply no other way to know for sure if this was indeed the endangered Braken Bat Cave meshweaver. Now that taxonomists have confirmed that this specimen was the endangered spider, steps will be taken to protect the habitat and the species in the area. Losing even a single endangered creature, like this arachnid, is unfortunate but the sacrifice of this one specimen could mean survival for its species.

Make no mistake, this discovery is a very big deal. Zara Environmental’s president, Jean Krejca, said it was akin to “stumbling on a new Galapagos Island in terms of the biological significance of the region.” Stirling J. Robertson, the team leader for TxDOT’s environmental affairs division, said, “From a conservation standpoint this is an amazing coup.”

The Braken Bat Cave meshweaver was first identified by George Veni, a hydrogeologist, back in 1980 in NW Bexar County only about five miles from the current construction site. The cave where Veni found the rare arachnid was later filled in and a residential development was built on top of it. The species was not seen again until last month. The species is literally back from the dead.

There are likely to be some legal fireworks to come. The underpass project was meant to ease traffic congestion on this stretch of highway that sees about 80,000 vehicles per day. Bypassing the area may not be an option. The entire area is riddled with small cave-like holes that could be spider habitat. What happens next is anyone’s guess but it is likely a judge, and not a biologist, will make the final call.

It is a decision that could decide the final fate of the Braken Bat Cave meshweaver.