First it was spiders, now it is beetles and amphipods. It seems some of the smallest "Texans" are finally getting their due.

Last week the U.S. Fish and Wildlife Service proposed setting aside 169 acres in the Texas Hill Country in an effort to protect the habitat of the Comal Springs riffle beetle (Heterelmis comalensis), Comal Springs dryopid beetle (Stygoparnus comalensis), and Peck’s Cave amphipod (Stygobromus pecki). The area, which includes parts of Comal and Hays Counties, has been identified as “critical habitat” for the species in question. As far as anyone knows, these three freshwater species exist only in four springs, which are all found in this part of the Hill Country.

Tierra Curry, of the Center for Biological Diversity stated, “These unique Texas creatures need protection of both their surface water and the underground recharge area and I’m so pleased they are getting the protected critical habitat they need to survive.”

This is a move that has been a long time coming. The Center for Biological Diversity along with several citizen conservation groups filed suit against the Fish and Wildlife Service in an effort to force them to designate critical habitat for these species once they were listed under the Endangered Species Act in 1997. While some critical habitat was designated in 2007, these groups deemed it insufficient as the protection only extended to surface water and did not include any of the underground recharge areas of the Edward’s Aquifer, which are also vital to the survival of these species. Another suit was filed which led to this proposal.

All three of these species are in imminent danger of disappearing. The Peck’s Cave amphipod is dependent on a clean and steady flow of water. While recent droughts in Texas have been hard on this species it has shown more resiliency than initially expected in the dry conditions the last few years. Even so, as the water level in the Edward’s Aquifer dwindles, so do the number of Peck’s Cave amphipods. 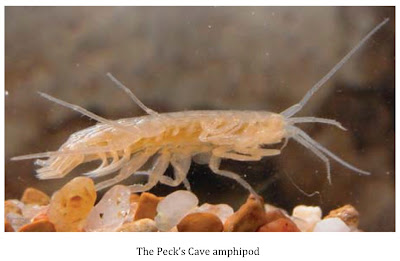 The Comal Springs riffle beetle is an aquatic insect with some pretty amazing abilities. For example, on its underside, it has a large mass of small and unwettable hairs. The species can use the hairs to form an air bubble which it uses to breathe underwater. This beetle, too, needs clean, flowing water that has a high content of dissolved oxygen to survive.

The Comal Springs dryopid beetle is a blind aquatic insect that, surprisingly, cannot swim at all. It lives in air-filled underground caves and cavities near flowing water.

Most Texans likely have never laid eyes on any of these species. Most have probably never heard of them either; however, it is small species like these that often give us much insight into the health of a particular ecosystem. They are a barometer of sorts, if you will. If we can save these small creatures we may end up saving larger, more familiar, species as well.

Besides that, it is simply the right thing to do.