The news sure can be depressing. For the most part, all you hear about are the ills of the world. War, terrorism, droughts, and famine rule the 6:00 p.m. time slot. Every now and then, however, you actually hear something encouraging. This would be one of those times. After years of legal wrangling, the U.S. Fish and Wildlife Service has finally granted jaguars protected territory within the borders of the United States. To say this has been a long time coming would be an understatement.

Jaguars (Panthera onca) once roamed freely about much of the American South and Southwest. The largest cats in the Western Hemisphere, and third biggest in the world behind only tigers and lions, jaguars inhabited parts of Arizona, New Mexico, California, and Texas. The cats sometimes wandered even farther north and east as there were documented sightings of jaguars in Colorado and North Carolina in the late 1800’s. 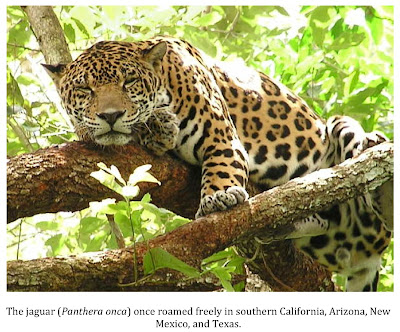 As the population boomed and Manifest Destiny took a firm hold on the collective American mind, more and more humans began invading jaguar territory. Farmers began cultivating the land for agriculture, which rendered it useless as jaguar habitat. Ranchers, hostile to the jaguar due to potential predation of their livestock, would shoot the big cats on site. The growth of urban centers and the development that followed swallowed even more habitat. It wasn’t long before jaguars became scarce and rarely seen. In fact, they all but disappeared north of the Rio Grande. They became little more than ghostly memories in the United States as the surviving cats were limited to Central and South America and Mexico.

Somehow, some way, that began to change in the 1980’s. Jaguars began to be reported north of the border in Arizona. Many of these reports were not taken seriously by wildlife officials at the time; however, and nothing was done about them. Then, in 1996, a southern Arizona hunter photographed a jaguar near the border. This prompted jaguar advocates to jump into action and soon groups began petitioning the government for official protection for the species and its habitat. The U.S. Fish and Wildlife Service resisted, however. The FWS came to the conclusion that jaguars didn’t need special protection in the U.S. to survive. One of the strongest jaguar advocate groups, the Center of Biological Diversity, filed suit to fight this ruling in 2007. The predictable legal wrangling ensued with neither side budging or gaining ground until 2009 when something remarkable took place. 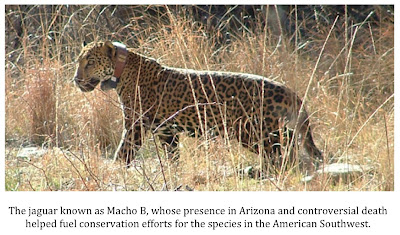 On February 18, 2009 a male jaguar was captured inadvertently in a trap set by the Arizona Game and Fish Department. The trap was intended for black bear and/or mountain lions and was being used to survey the population of these two species south of Tucson. The jaguar was identified as Macho B, a cat that had been photographed via trail cam before. The jaguar was evaluated and, though very old at an estimated 15-16 years, given a clean bill of health. The big cat was fitted with a lightweight satellite tracking collar in the hopes that the data gained would reveal more about jaguar habits in Arizona. This was not to be, however, as the data soon revealed Macho B was anything but healthy. Tracking information revealed a continuously diminishing range. The decision was made to recapture Macho B and try to determine what was wrong. To make a long story a bit shorter, the jaguar was recaptured, found to have terminal kidney failure, and euthanized.

The death of this jaguar was quite controversial. Euthenasia always is, I suppose. Many thought Macho B should have been released to live out his few remaining days in the wild while others felt putting him down was doing the cat a favor by ending his suffering. Regardless, the death of this jaguar was a disappointment to all. It did serve, however, as a rallying point for conservationists who picked up the pace in their efforts to gain protection for the jaguar, and its habitat, in Arizona. 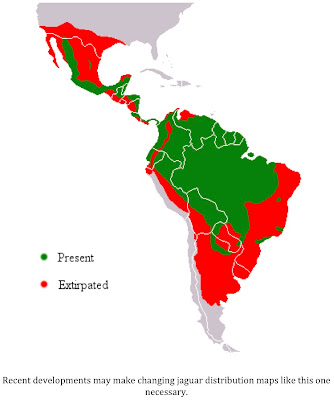 The fight was far from over though. Jaguar advocates argued that jaguars belonged in the American Southwest as they were part of the region’s historical fauna and would have inherent value to the ecosystem. Others added that the government actually owed the jaguar critical habitat as the original extirpation of the big cats in the region came mainly at the hands of the feds via a predator extermination program that ran from 1918-1964. In addition, it was argued, the government initially failed to list jaguars under the Endangered Species Act, an oversight that took the federal government more than 25 years to correct. Other prominent conservationists disagreed and claimed it would be a monumental waste of time, money, and resources to focus on jaguar recovery in the American Southwest as it was marginal habitat at best and was more than 200 kilometers away from the nearest breeding population in Mexico’s state of Sonora.

The arguments, for the moment, have come to an end with the government’s move to designate 1,309 square miles across southern Arizona and a small piece of southern New Mexico as prime habitat that is essential for the survival of the endangered jaguar. The designated land includes mountain ranges in rural Pima, Cochise, and Santa Cruz counties in Arizona and portions of Hidalgo County in New Mexico. These are areas that are known to have been occupied by jaguars, at least periodically, since 1962 and meet the government’s criteria of having rugged terrain, expansive open spaces, availability of surface water, an adequate prey base, minimal human presence, relatively easy access to northern Mexico, and be 3-40% covered by Madrean woodlands including oak, juniper, and pine or by semi-desert grasslands.

Whether the American Southwest can support a breeding population of jaguars remains to be seen. The one thing both sides of the jaguar argument agree on is that, for there to be any hope at all for the species to bounce back in the region, substantial conservation efforts will have to be extended into northern Mexico. Regardless, the jaguar now has a fighting chance.

I think that is cause to be hopeful.