I received a very interesting response to a post I made back in November of 2010 called “The Rock Apes of Vietnam.” There really wasn’t much to the post at all as it was more of a recommendation to read an article by Loren Coleman over at Cryptomundo.

“I was in Vietnam 1967-68 near a firebase called the Rock pile. One night we heard what we believed to be invaders coming through the minefield. A marine next to me said that they were rock apes and he then threw a rock in the direction of the intruders only to have it thrown back. He again threw it back but this time the rock got bigger and every time he threw the rock got bigger until it was almost bowling ball size. Quite the game. Due to darkness, we could not tell how many "apes" were there but later that night one managed to step on a mine. All accounts I have read as far as ape/humanistic look agrees with what I personally saw. It is not a myth.” 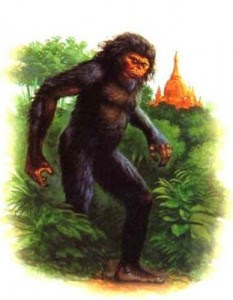 I shared this report with some of my fellow TBRC members. One of them shared the story below:

If there are other Vietnam vets out there who have had experiences with these rock apes I would really like to hear about it. You can send me an email at Texascryptidhunter@yahoo.com or just leave a comment to this post.
Posted by Mike at 9:55 PM